Armed Forces Day: The Oath of Enlistment, and What It Really Means 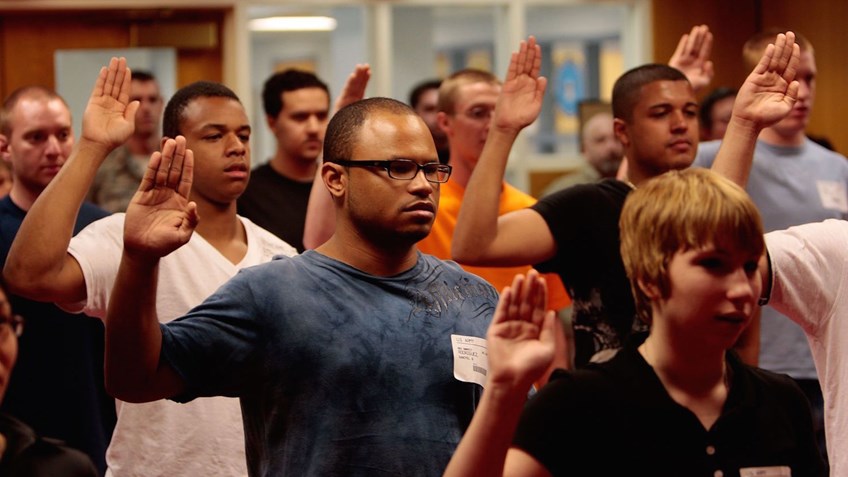 More
SUBSCRIBE
It’s now been more than eight years ago that I found myself standing amongst other Marylanders in a warm, wood-paneled room, standing in a loose rank and file under the excited, yet anxious gaze of family members who tagged along to witness what was happening.

That cozy room, replete with the service flags of each U.S. military branch – and, of course, our revered Stars and Stripes – was inside the Military Entrance Processing Station at Fort George G. Meade, an Army post sandwiched between Washington, D.C. and Baltimore a few miles from I-95.

That day saw the latest in a never-ending pack of ambitious – and nauseous, speaking from personal experience – young Americans file in to raise their right hands and swear the Oath of Enlistment, pledging their unwavering service in defense of the United States, its citizenry, and namely, its Constitution. 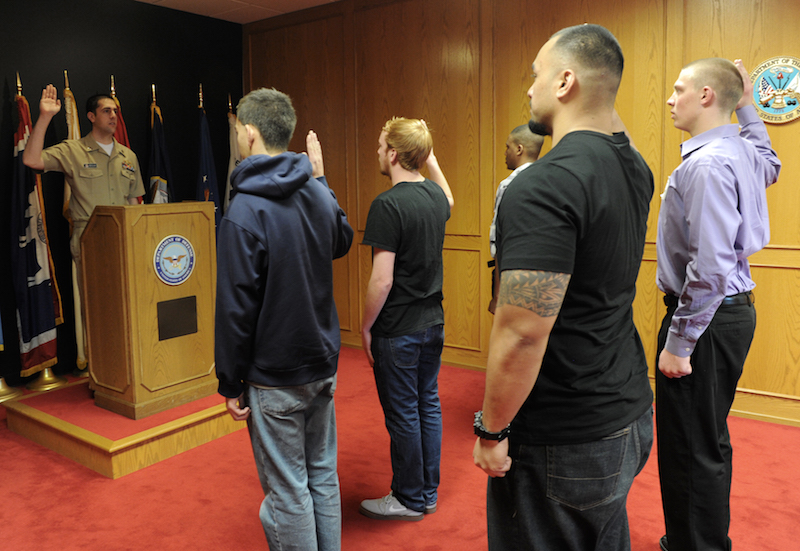 New recruits swear the Oath of Enlistment at a Military Entrance Processing Station in Colorado. (Photo courtesy/Department of Defense)

I’ll never forget the huge array of emotions that consumed me in that moment, and over those frantic final days of civilian life. In the weeks and months prior to standing shoulder to shoulder and committing myself to our nation, I navigated the process that millions of other Americans have gone through in considering joining the military. Days included “sales pitches” from eager recruiters, independent research about each branch’s mission and role, enduring “war stories” from other veterans I knew, and hurriedly trying to get in reasonable physical condition to be ready for the break-neck pace of basic training life, all while compartmentalizing my soon-to-be “old life,” saying goodbyes and “see-you-soons,” and trying my best to rationalize what was happening as I drew closer and closer to “ship date.”

I knew I wanted to join the Air Force. I was enthralled with the attractive imagery, the lexicon of “air superiority” weaving the narrative of the world’s premier aerospace fighting force. I was going to be a public affairs specialist, tasked with telling the world – supporters and enemies alike – that the U.S. Air Force was America’s “sentry and avenger,” and our foes’ “death from above.” For someone who had been, to that point, an idealistic young college-dropout pacifist with a knack for storytelling, I was enamored and overcome with patriotism and pride, knowing that I could in some small way contribute to the security and peace of mind enjoyed by Americans everywhere that was afforded by the men and women of our Armed Forces.

I eagerly scribbled my signature on a litany of documents titled “DD Form this,” and “AF Form that,” initially ignorant to exactly what I was doing. I knew I was joining the military… I just didn’t fully understand what that meant. I survived the invasive medical examinations, interviews, and paperwork sessions, completing checklists and systematically shutting down shop on the home front. I quit my job, arranged for family to watch after my worldly effects, and tried wrapping up as many loose ends as I could. It was all coming together.

I blinked, and saw the colorful ceremonial flags at the front of the room, the sharply dressed young Army lieutenant who appeared to perform our swearing in, and out of the corner of my eye, the beading sweat and frenetic nervous shuffling of about 15 other men and women – who in that moment of vulnerability looked more like elementary school children – there for the same reason that I was. 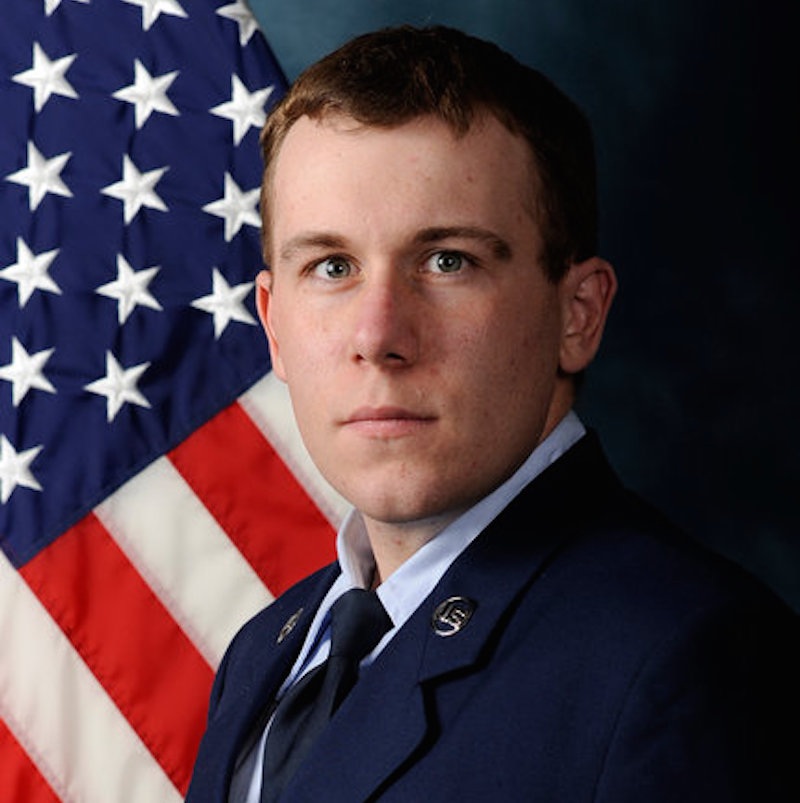 An official U.S. Air Force portrait of the author, circa 2012.

The lieutenant, who appeared as young as I was, introduced herself and issued a short set of instructions before the once quiet room echoed her piecemeal commands in unison:

“I,” followed by a brief indistinguishable volley of names, “do solemnly swear that I will support and defend the Constitution of the United States against all enemies, foreign and domestic; that I will bear true faith and allegiance to the same; and that I will obey the orders of the President of the United States and the orders of the officers appointed over me, according to regulations and the Uniform Code of Military Justice. So help me God."

On the surface it felt procedural, another checked box on a growing list of prerequisites I had to execute before I could just get on the bus. But even in the sleep-deprived, hidden anxiety of life imminently changing forever I knew what I just did was so much more than merely a requirement. It was a promise.

Before I could inhale, I was on a plane bound for Texas. Waiting for a bus in the middle of the night at the airport. Standing in line awaiting an obligatory barking-at from an energy drink-fueled drill sergeant – we called them Military Training Instructors in the Air Force – at 3 a.m. Finding my bunk and laying sleeplessly in it for what seemed like a year. The next eight weeks were (and remain) a blur, only bits and pieces of the experience rising to the surface of memory’s pond. I went from civilian to Airman with a capital “A,” and hustled back to Fort Meade for technical school training to become an intrepid military journalist.

I did well in “tech school,” and moved on to Langley Air Force Base to start working. The next seven years had all the ups and downs one could imagine in a military career, but was a remarkably safe, uneventful and domestic tour of duty. It would be easy to forget why I was there in the first place, living a life complete with the creature comforts of home in a good neighborhood surrounded by great people. At the end, I found a great opportunity to come work for the National Rifle Association, and capped off seven great years in uniform to start a new chapter supporting the NRA’s missions. 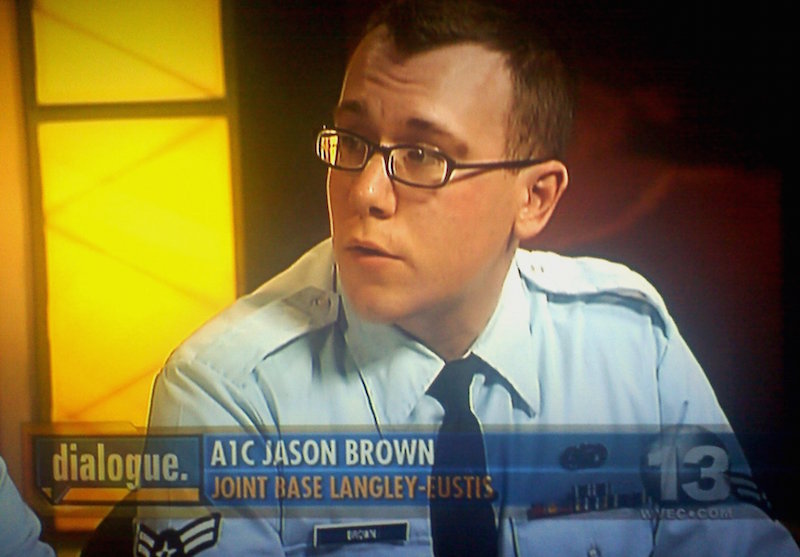 The author, then an airman first class, appearing on WVEC 13's Dialogue to promote an upcoming air show in 2011.

But that’s not the same story for every service member – not even close. Thousands of American men and women have gone through the same experiences that I have while enlisting, and we’ve all raised our right hands to swear our Oaths and Enlistment or Oaths of Office. We’ve pored over the paperwork, checking the boxes, and saying goodbye. We’ve endured basic training, honed our skills in technical and combat skills training, and kept the edge of the sword ready when called to use it. I never got the call, but in the two and half centuries of our military history, millions of Soldiers, Sailors, Airmen and Marines did. They answered it, just as they swore to do.

Hundreds of thousands never came home. In my relatively comfortable military career, that was the constant reminder of the gravity of our pledge to stand and fight. Not only hearing the traumatic story of a fellow Air Force photojournalist who, while embedded with an Army fire team downrange in Southwest Asia, was the victim of one of thousands of roadside bombs and small arms attacks, but having to prepare press releases and news products announcing the deaths of Airmen serving overseas who left my base and weren’t coming home. Knowing that while I’ve hung up my uniform for good, countless friends, acquaintances and unit alumni remain on the rolls, grinding the blade in the dark, ready to fight the good fight to keep us free.

There’s no way I could’ve understood the gravity of what that Oath of Enlistment meant when I took it. Even though I knew it meant something, I wasn’t mature enough to grasp it, and even today I struggle with wondering if I genuinely understand it. What I do understand is the immense sacrifices made by those in our military to ensure everyone else is protected, and how even in an America numb to the seemingly endless conflicts in foreign lands involving those in our military, we can’t allow the status quo of eternal war to diminish the utter selflessness and heroism exhibited by these Americans who voluntarily run into chaos.

This Armed Forces Day, turn off the television, turn down the radio and close the browser. Quit the news apps for a few hours, and really think. Think about your life, your safety, your rights and how it is to be able to wake up and enjoy all of that. Now, imagine what it would be like to be a new high school or college graduate with your whole life in front of you, and you make the choice to potentially put your life on the line to ensure that everyone else who enjoys that feeling of security and liberty can continue to do so. Imagine the emptiness of families that have to cope with life after the ultimate sacrifice, and how the selfless service and bravery of the fallen is one of the lone consolations in the hours of mourning. 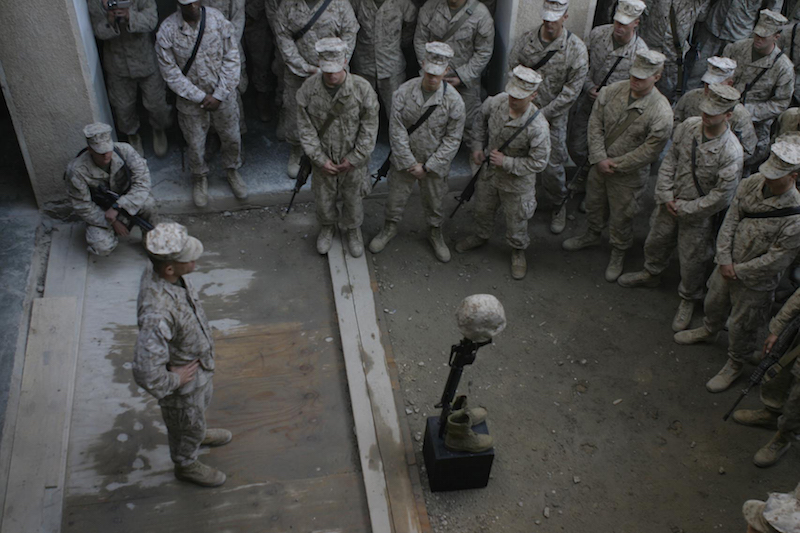 U.S. Marines attend a memorial service for a fallen Marine in an undisclosed location. (Photo courtesy/Department of Defense)

You don’t have to thank a veteran for their service, for most of us are just doing what we think is right. I only ask that you read the words of those Oaths all military members take, and try to understand just how significant it is. You might fail to capture it, just as I have, but it could be an exercise that imparts the true significance of just what it means to be willing to give up everything to defend what’s worth fighting for.