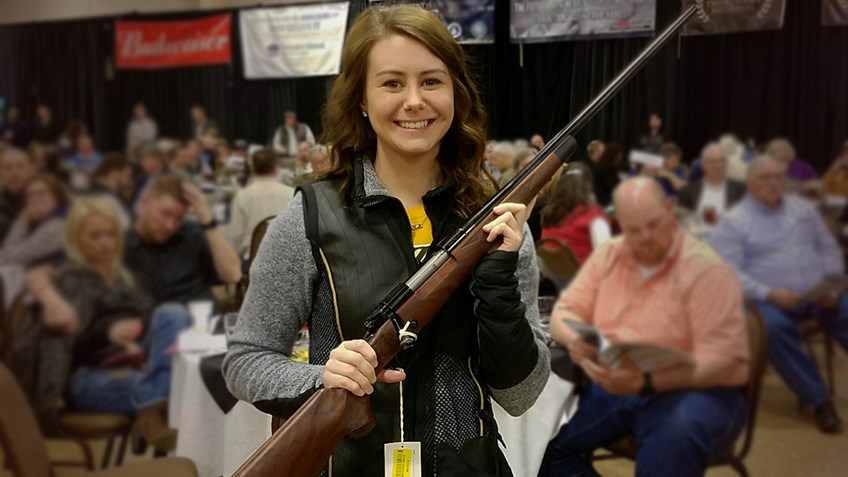 This is where it all began.

Twenty-five years ago a passionate circle of NRA supporters in Columbia, Mo., had a vision to start fundraising parties for the NRA. This was the birth of Friends of NRA—right down to the name coined by former committee Chairman Jim Joy. “It had to be simple,” Joy remembers, “And I just thought to myself as I looked around the room, ‘We are all friends, and we want to do something for the NRA... How about 'Friends of NRA'? We all agreed that the name said it all.”

The electric energy and magnified passion for the shooting sports captured by that original circle of friends has only heightened over the years. So, it comes as no surprise that this founding committee’s 25th Anniversary event on March 11, 2017, started out with a slight problem: attendees arriving 90 minutes before the doors opened. Needless to say, the doors opened early and four large event rooms brimming with games, raffles and a silent auction quickly filled with players and bidders all eagerly hoping to take home a shiny new firearm or two or three.

In preparation for the event, local college students happily helped drum up raffle ticket sales. “We always have extra volunteer hands from the University of Missouri Shotgun Team and the University of Missouri JROTC,” says North Missouri Field Representative Travis Scott. “They are a huge help with this large event. Both groups are also NRA Foundation grant recipients, and they are the reason we do what we do.” 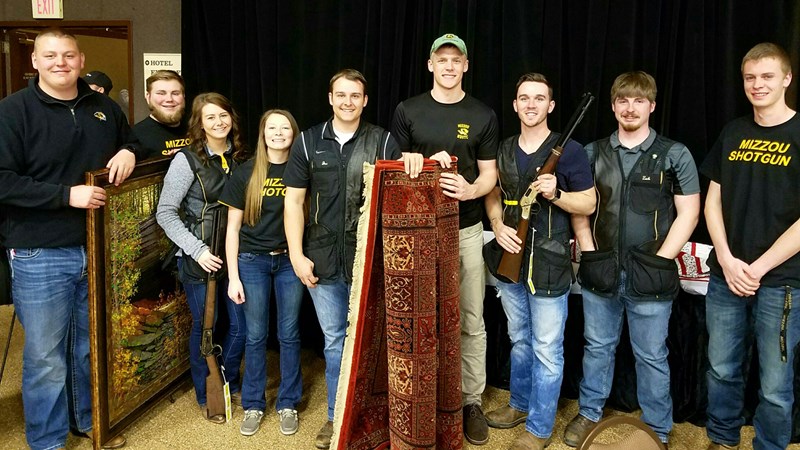 “I really attribute the success of Friends of NRA events to the participants and volunteers,” says Mid Missouri Friends of NRA Committee Chair Erin Ellingson. “Everyone is there for a great cause, so people are really willing to help out. From the donors who give us unique and fabulous items, to the banquet volunteers and field reps who work an amazing amount of hours all year to pull off the event, to the attendees who open their wallets for dinner, raffle tickets, games and auctions. If you take any of those ingredients out of the mix, these events just wouldn’t happen.”

Even the kids in attendance had a ball in their own interactive simulated shooting room. Scott says it’s a big hit every year. “They play Laser Shot®,” he explains. “We call it the ‘Future Friends Room’ because they are future Friends of NRA supporters.”

The pinnacle of the evening was a nostalgic presentation to the hosts and chairpersons of the inaugural Friends of NRA event, Larry and Brenda Potterfield. South Missouri Field Representative Gregg Pearre presented a banner from that 1992 event. “You know this has been under my desk for the past twenty-some years,” Pearre said, “And I knew exactly what to do with it when this 25th Anniversary event came up.”

Choking back tears, Brenda Potterfield took the mic. “You know I don’t usually like to talk on this thing,” she started. “But this is a really special night—25 years. Thanks for being around all these years, guys. 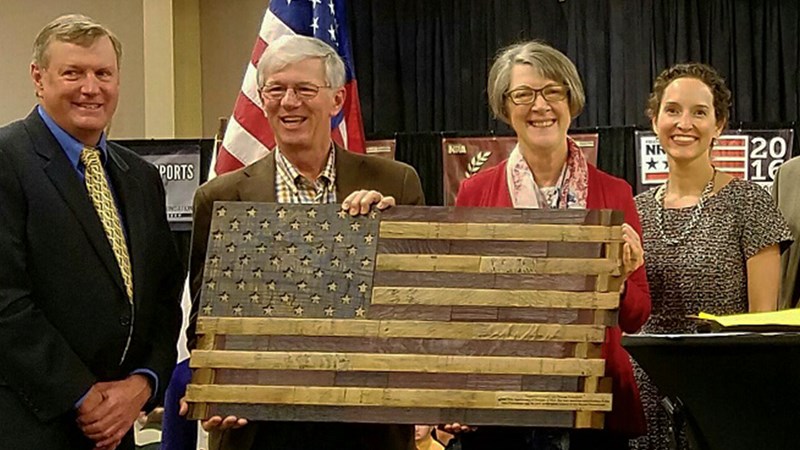 NRA Director of Field Staff Phillip Gray and Director of Volunteer Fundraising Sarah Engeset, along with Central Regional Director Chad Franklin and Missouri Field Reps Travis Scott and Gregg Pearre, presented the Potterfields with a special, hand-crafted American flag made from bourbon barrels by The Heritage Flag Company for their generous contributions to the Friends program and their unwavering support of the Second Amendment.

“The Potterfields hold a special place in our hearts,” said Engeset. “They’ve been with us from the very beginning and continue to be incredible ambassadors for the Friends of NRA program. We hope they continue their journey with us for the next 25 years.”

Larry Potterfield, founder and CEO of MidwayUSA, shared his thoughts next. “Helping develop and hold the first Friends of NRA event back in 1992 was just a natural step towards supporting a cause so many of us believe in,” he said. “Friends of NRA has held close to 20,000 events, reached over 3.7 million attendees and raised more than $740 million for The NRA Foundation—it’s an honor and a privilege to have been part of that for the last 25 years.” 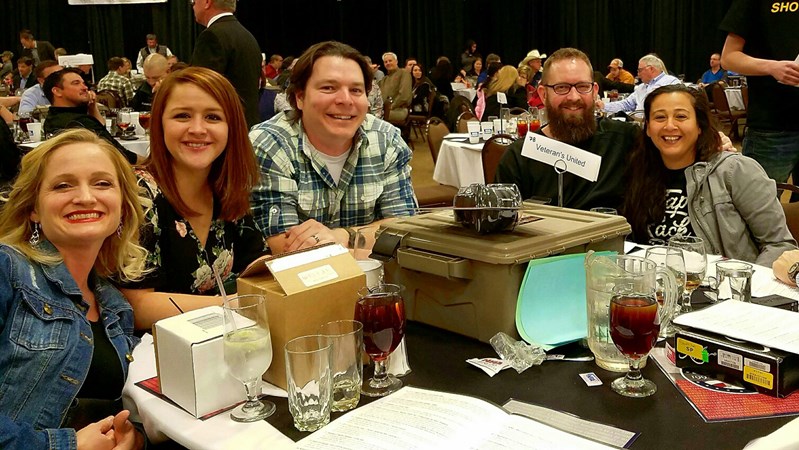 “Brenda and Larry have done, and continue to do, incredible things for the shooting sports community,” says Ellingson. “They have founded three great organizations—MidwayUSA, Friends of NRA, and the MidwayUSA Foundation—to develop the next generation of shooters so that we never lose our Second Amendment rights. Obviously, without them and the other founding members of our committee, there would be no Friends of NRA. Every dollar we raise tells you a little bit about their impact on the shooting sports community.”

And raise dollars they did. Highlights from the live auction included a Friends of NRA Anniversary No. 5-style revolver by local Missourian Grand Master Ron Powers. Bidding launched on GunBroker.com a month prior to the event and concluded that evening with a final bid of $6,800. Also up for grabs was a Power Custom Grand Master Deluxe firearm with a 25th Anniversary serial number and customized by Ron Power and his son Randall. Sarah Potterfield won it with a $4,500 bid. For his unflagging support over the past two and a half decades, Ron Power was presented with an inscribed granite plaque.

Then it was all eyes on Taylor Frevert, jumping around with arms flailing and hugging every friend he could find, as his winning ticket was called for the Tracker Pro 160 bass boat generously donated by Bass Pro Shops. He was one of 200 attendees who bought a $100 ticket for a chance to win, and luck was on his side that night!

And just like that, it was over. The committee was all smiles, knowing they just pulled off another successful event. But then again, this ain’t their first rodeo. “Oh my gosh!” exclaimed Ellingson. “The 25th Anniversary banquet was outstanding! There was such a great energy all night. Everyone seemed to have a wonderful time, and we raised a committee record amount—$150 thousand for The NRA Foundation. I know that the vision of preserving the shooting sports is as strong as ever and now maybe a little bit more secure.”