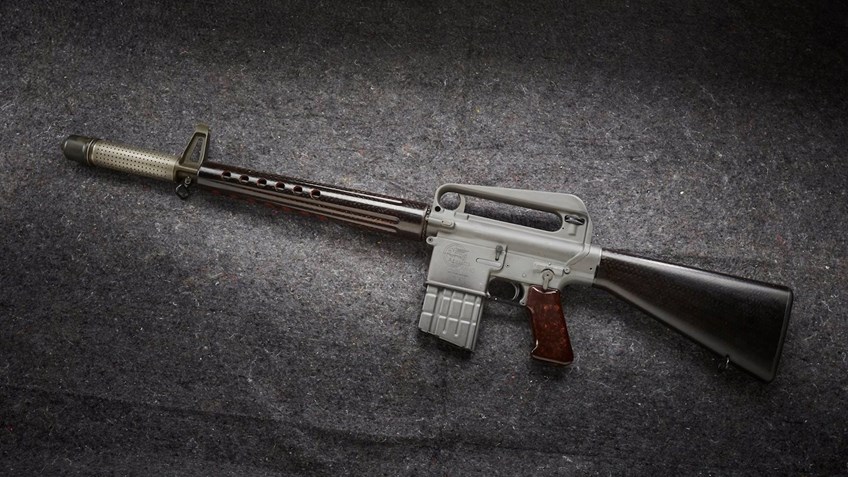 The M1 Garand was the rifle that won World War II for the United States, a reliable and beloved workhorse lauded by Gen. George S. Patton, Jr., as “the greatest battle implement ever devised.”

However, the time had come when the U.S. military, realizing the steepening technological curve that firearms were traversing, decided to replace the M1 with a new service rifle. The military wanted a rifle capable of faster firing and fully automatic fire, yet accurate and lightweight, alongside other improvements, including the use of box magazines as opposed to loading by clips.

The establishment of NATO in the wake of World War II brought together global allies to respond to the growing threats posed by an emboldened Soviet Union. Of the efforts to help unify their efforts, NATO formed a “Rifle Steering Committee” to develop a standardized rifle used by NATO nation forces. 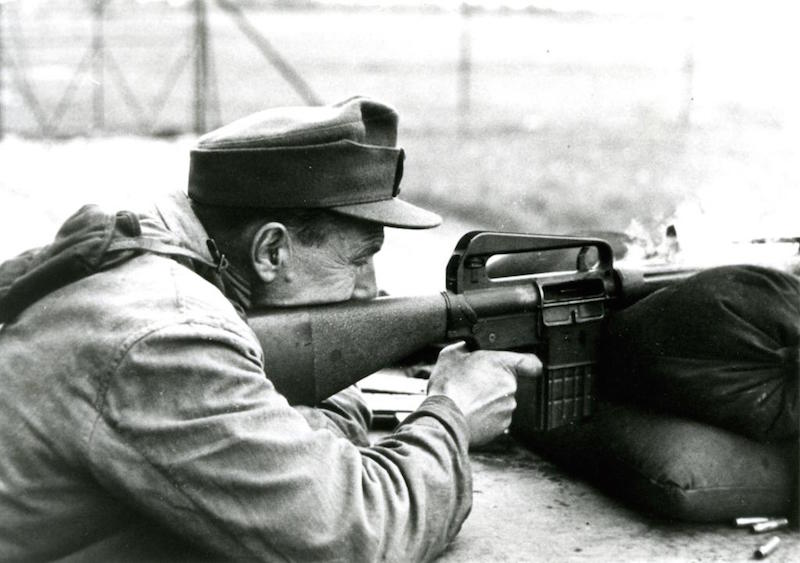 Firearms manufacturers began receiving invitations to produce prototypes to enter the military’s rifle trials, pitting their designs against each other in rigorous battery of tests to determine which design the armed forces would adopt. Of the gunmakers submitting designs – which included Fabrique Nationale with their T48 FAL and Springfield Armory with the T44 prototype – a small newcomer joined the trials, introducing a rifle markedly different than anything seen before.

The company was ArmaLite, an engineering subsidiary of Fairchild Engine and Airplane Corporation from Hollywood, California. The nine-member staff, lead by chief engineer Eugene Stoner, produced innovative firearm designs using materials not seen in guns to that point, including aluminum and fiberglass.

Having produced the AR-5 and AR-7 survival rifles, the company had experience in designing firearms for trials, and began working on a rifle to compete to become the next service rifle for U.S. and NATO forces: the AR-10.

The AR-10, developed by Stoner, moved away from the traditional wood stock of the M1 Garand in favor of a straight-line design, with elevated iron sights, recoil compensator, and the patented gas system. In this system, gas from a fired cartridge would bleed into a gas block – in this case, the front sight assembly, through a small gas port in the barrel.

That gas would then travel in a metal tube back to the receiver into a gas key on the bolt carrier, pushing it rearward and unlocking the bolt from the barrel extension. The bolt group would extract and eject the used casing from the chamber, and as it pushed against mounting pressure on a buffer and spring within the stock, would begin to travel forward again, picking up a new round from the box magazine and chambering it, thus cycling the action and readying the gun to fire again. 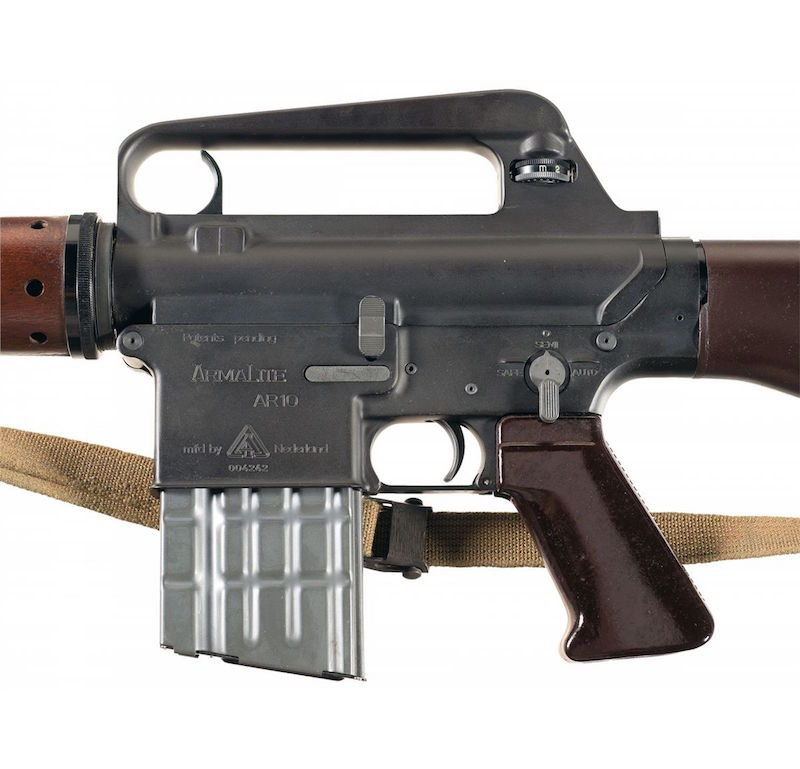 Stoner’s initial AR-10 design, completed in 1955, was chambered for the 7.62x51 mm NATO cartridge, similar to the commercial .308 Winchester, as prescribed by the needs of the NATO program. The aluminum alloy receiver and reinforced fiberglass pistol grip, stock and handguards made the rifle about a full pound lighter than other infantry rifles from that era, and the gas system was innovative compared to the pistol systems employed by competitors.

Unfortunately, one of the biggest gaffes in a design that otherwise stacked up well against competing rifles was the inclusion of a composite barrel made of aluminum and steel. The composite metal, an untried design specified for the rifle trials by ArmaLite president George Sullivan despite strong objection from Stoner, burst during a torture test performed by Springfield Armory in 1957.

While ArmaLite was able to quickly replace the prototype barrel with an all-steel version, Springfield Armory had made their minds up, and refused to recommend adoption of the AR-10., claiming it was take at least five years of testing before the rifle could confidently be considered for adoption.

Despite ArmaLite’s objections, the U.S. Army viewed the AR-10 as a purely prototypical firearm at that stage of development, one that could not possibly be tested and ready to field within their time constraints. The Army passed on Stoner’s rifle, and selected the more conventional T44 as their next service rifle, which became the M14. 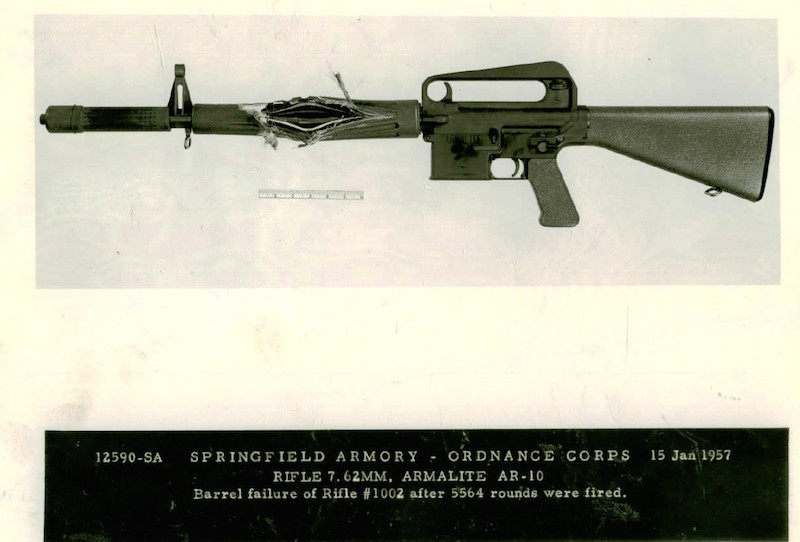 While the U.S. balked at the strange new battle rifle and fielded the M14 (a decision that angered NATO allies perhaps as much due to some political indecision dealing with the FAL during the same trials), ArmaLite wasn’t left entirely high and dry. The company was able to license the AR-10 to several nations and arms manufacturers, including the Dutch group Artillerie Inrichtingen, which saw service in Sudan and Portugal, as well as models produced for Guatemala, Burma, Italy, and Cuba.

The AR-10 would never enter service in the U.S., but its influence on American arms was just beginning. ArmaLite decided to try its hand at developing a service rifle again in 1957 as part of the U.S. Continental Army Command rifle program. The goal was to produce a .22-caliber select-fire rifle that weighed six or fewer pounds and fired a high-velocity projectile accurate to 500 yards.

Stoner teamed with Jim Sullivan and Bob Fremont to resurrect the AR-10 basic design. ArmaLite introduced the AR-15, which fired the .223 Remington cartridge, in 1958. The AR-15 drew incredible interest, and the company began marketing the AR-15 and AR-10A, an upgraded version of their original design. 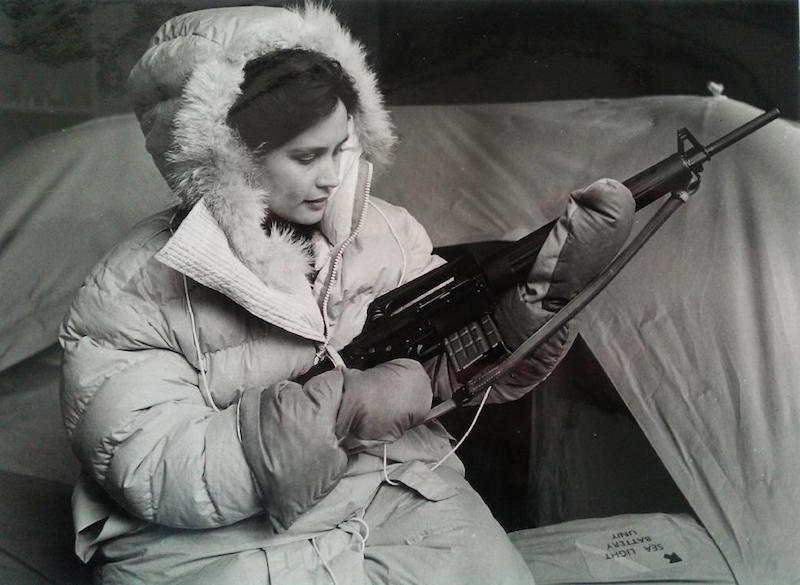 However, despite the enthusiasm surrounding the AR-15, the AR-10A didn’t attract any military buyers domestically or abroad. Fed up with what was seen as a failure to become profitable, ArmaLite famously sold the AR-15 and AR-10 designs to Colt in 1959. Stoner left ArmaLite in 1961, and Fairchild sold the subsidiary to its president, George Sullivan, in 1962.

The AR-15 went on to become the one of the most famous rifles in history, flourishing under the Colt brand and being adopted (in a select-fire variant) as the M16 rifle, the service rifle for the U.S. armed forces. Its descendant, the M4 carbine, remains in service today in the U.S. military.

The AR-10, however, continued to be manufactured in its original design by Artillerie Inrichtingen, with some military surplus being sold to commercial customers in the U.S., Canada, and Australia. 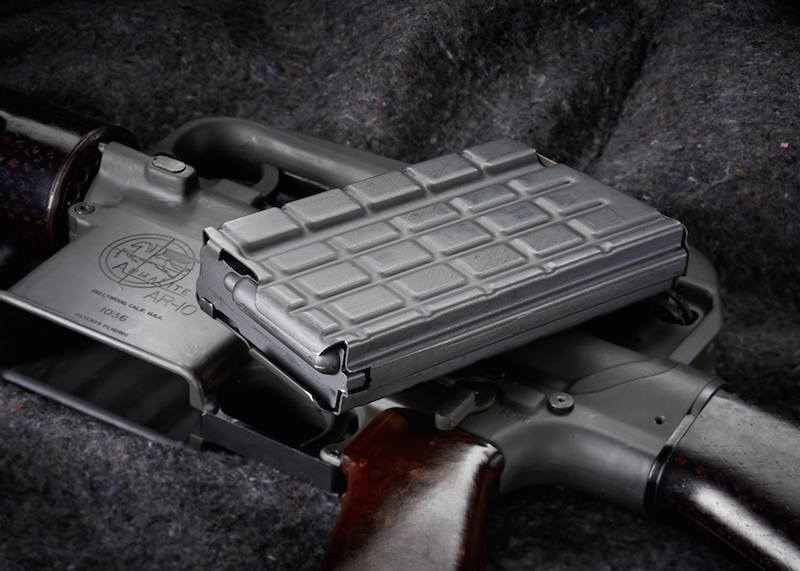 In 1995, a former Army Ordnance officer named Mark Westrom bought the then-defunct ArmaLite brand and re-opened for business, introducing the AR-10B, which was based on Colt’s AR-15A2 and scaled up to use the .308 round.

Today, various gunmakers manufacture a .308 or 7.62x51 NATO-chambered AR-10 –style rifle, including ArmaLite, DPMS, Palmetto State Armory, Ruger, Smith & Wesson, Windham Weaponry, and many more. While there are significant differences in the patterns used in the rifles (ArmaLite AR-10 style vs. DPMS LR-308-style, for example) that parts compatibility between models like its AR-15 brethren, the AR-10 legacy lives on in the hands of military forces, competitive shooters, hunters and recreational gun owners worldwide.

Just like the reverence granted to Eugene Stoner as the mind behind the beloved AR-15, the brilliant engineer is also to thank for the beefed-up battle rifle predecessor that continues to withstand the test of time, approaching 70 years later.

Want to see an early AR-10 rifle up close? The NRA National Firearms Museum in Fairfax, Virginia, is home to one of the earliest AR-10s used in the original trials! See this and thousands of other historic, significant and unique firearms from throughout history in the galleries of the NRA Museums in person or online!