This Is A Gunsmith's Story 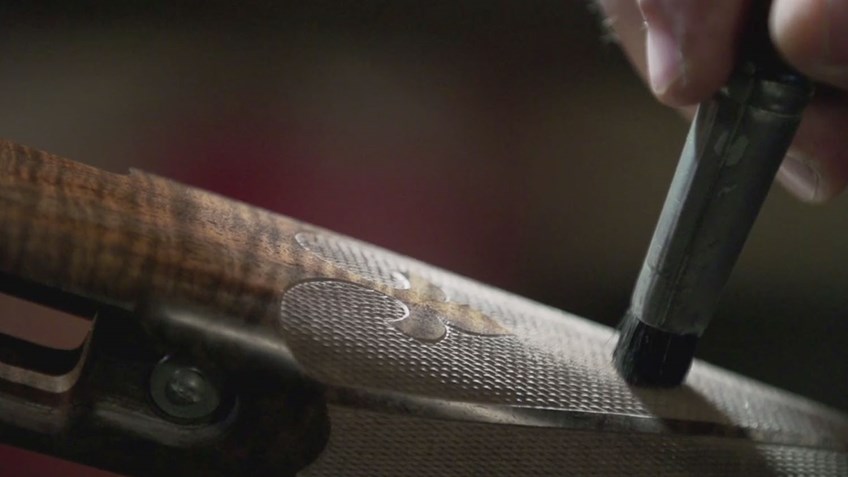 It was half-way through the 2017 SHOT Show. Our feet were screaming at us, so we took a minute to rest on the plush carpet of the NRA Booth, when a man came up to greet us. It’s pretty typical at events, individuals stopping by to ask questions, talk, and sometimes say thanks. This instance was unique. A man approached us and in a timid yet bold way shook our hand to say ‘Thank You’ for supporting our gunsmithing school. He proceeded to tell his story, and we were intrigued. We knew we had to share this story with you, our readers.

This is the story of Wade Wallace. A man with an impressive and expansive curriculum vitae, a man who served and continues to serve our country, a man who took a hobby and turned it into a passion.

I was born and raised in Wadesboro, North Carolina. (I was not named after the town… I was named after my great grandfather). It is a small town….population in the entire county is about 15,000.  When I was growing up it was a textile bustling county with several textile plants employing much of the working population. Most of the textile plants closed over 30 years ago, leaving a lot of people out of work. Lots of people moved away or work outside of the county now.

I grew up between the 1960's and early 1980's. My dad had me and my older brother working at an early age. I remember working at my dad’s service station starting in the fourth grade. We would get off the bus from school in the afternoons and then hop on our bikes to ride to my dad’s service station. We pumped gas, checked oil, and washed windows. I remember it was years later before I saw self-service gas stations. I worked for my dad until I was in the 10th/11th grade. As soon as I got my driver’s license I took a course to drive a school bus. At that time students drove the school buses where I lived - it was a good part time job. Later, I started working in a grocery store bagging groceries and stocking shelves.  My brother got into sports and played football 9th-12th grades. I played in the band and was a good trumpet player. I made All-State band 9th-12th grades and was #1 in the state for my age group when I was in the 9th grade. I played a little softball for the church league and got into running as I got older. I joined the Navy in the 1980's, and running became a big part of my work out routine. I competed in a few half marathons, the 27th Marine Corps Marathon, and several 5ks and 8ks.

Growing up, my dad always had guns in the house and I remember him going hunting a lot when I was little. Most guns were locked up, but he did have a pistol handy in the house for emergencies. I remember him coming home from hunting one morning and his rifle went off in the truck in the driveway. It startled everyone where we lived in the city limits. It shot through the floorboard of his truck. Fortunately, nobody was hurt but it was a good reminder to unload when coming out of the woods from hunting.

I wasn’t introduced to firearms until I was around ten. My dad spent time with my brother and I teaching us about firearms and firearm safety. In our eyes, he knew a lot about guns. He was a Gunners Mate in the Navy several years before we were born.

Together we would shoot .22s and shotguns. We’d target practice on family land or friends of my dad who had land. My schedule never allowed me to shoot competitively, but I do love hunting. I have fond memories of squirrel, dove, and deer hunting. Deer hunting was my favorite. I did not get my first deer until years later, but thoroughly enjoyed the outdoors. I was thrilled every time I saw a deer.

My first gun was a double barrel 20-gauge shotgun. I still have the shotgun today!

When I got my driver’s license I started hanging out with friends more often, spending every moment I could fishing and hunting with friends – when we weren’t dating our girlfriends – we were enjoying the great outdoors. My old friend and I still get together these days to fish.

I tried college after high school, but it wasn’t for me at the time. I joined the Navy in 1983 and served for 24 years. For the first twelve years, I was a Nuclear Power Machinist Mate on submarines. I was deployed on and off for eight years and served on the USS Baton Rouge, USS Holland, and USS Tecumseh. I applied, and was accepted, for an opportunity to go back to college while on active duty. I earned my Bachelor of Science degree, and later a MBA during a two-year period before being commissioned as a Medical Service Corps, Health Care Administrator. I served twelve more years, five with the Marines, before retiring from the Navy in 2007 as a Lieutenant Commander and continued working in healthcare for about six years after the Navy. 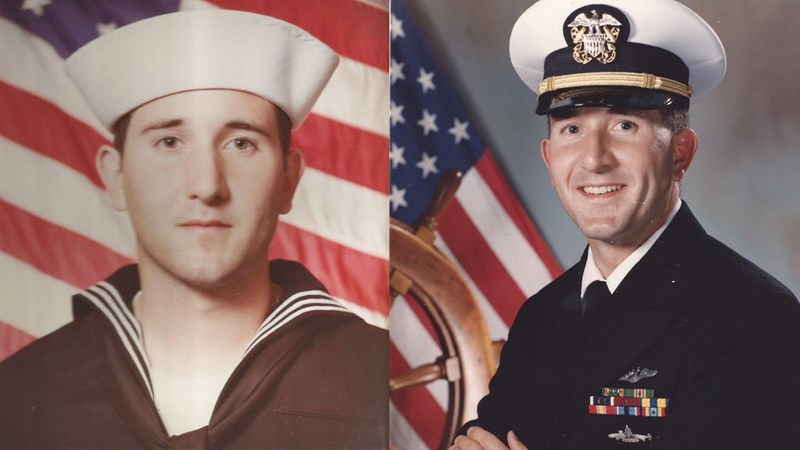 During my time in the Navy, my interest in gunsmithing peaked. I took a correspondence course in the 1980's and had a FFL for a few years, but had to put it on hold because of my deployments and career with the Navy. My interest in gunsmithing and hunting was on hold. However, after retiring in 2015, I started hunting again but yet work still consumed my time. Finally, I decided that after two back surgeries and other health problems, it was time to retire and focus on my health. It was then, I decided maybe working for myself as a gunsmith could be good therapy for me. It was not only a hobby, but a part-time job, and a passion.

My family was supportive, but wanted me to first and foremost, take care of myself. Some friends asked, “gunsmithing… what’s that?” I laughed and had to explain…

Gunsmithing is a lost art. One of the reasons I decided to become a gunsmith is because there’s hardly anyone around who provides the service. I thought it would be good part-time job for me to make a little fun money for myself and my four year-old grandson, Charly. 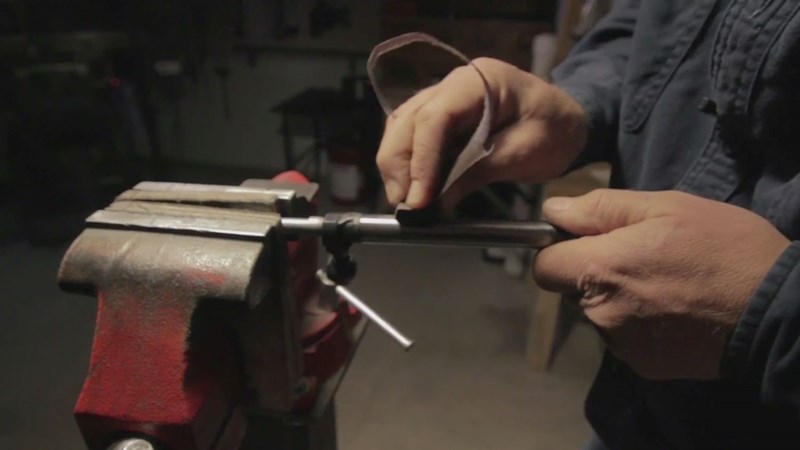 There are a lot of gun owners out there with a lot of guns. Given the political climate of the past eight years, a lot of people were buying guns partly for the unknown of the future of gun ownership. Becoming a gunsmith meant I could help other people while keeping myself busy, and enjoying what I do at the same time.

I enrolled at Montgomery Community College in Troy, North Carolina – less than 40 miles from my home. An easy commute. As a first year student, in the two-year program, I spent a semester working with lathes and milling machines. The next semester, we learn to work with general repair and custom rifle builds. Working with machinery requires good mechanical knowledge and machinery experience is a plus.

With a great group of instructors with various levels of experience and backgrounds – some who have military experience like myself – we create a bond that is hard to explain. Everyone helps each other the best we can. I personally always try my best to help my fellow students and the staff. There’s a good comradery between most of us. 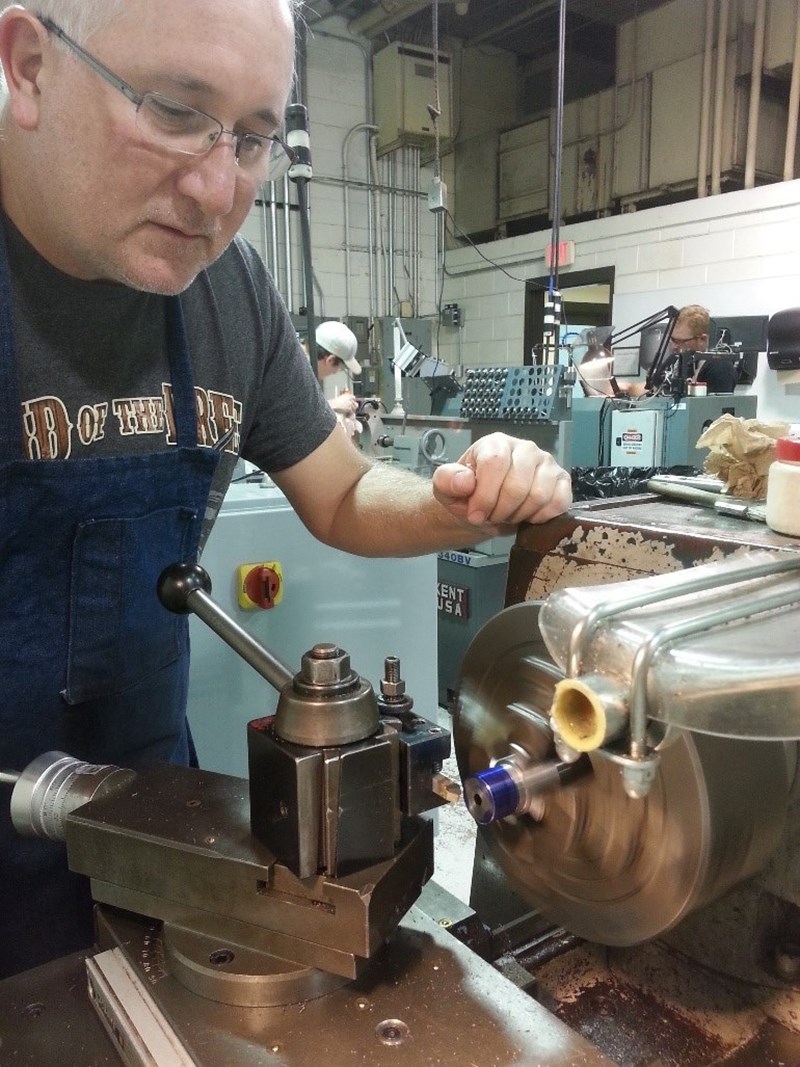 It is interesting to see how things work. I enjoy tinkering with this and that, then seeing my work be successful in repair or maintenance. I enjoy working with my hands and in gunsmithing you get to do just that. I’ve learned how to do a lot of things on my own over the years, so it can be frustrating until something is figured out, but the result is what’s important. It can be soothing as well.

I had an instructor several years ago, in my MBA program that said just because we have a Master’s in Business, doesn’t mean we should stop learning. Things change over time and what works today may not be best tomorrow. So learning new skills are important to me. The more I learn the more I learn that I don’t know. If I could be a part time student for the rest of my life, it would fulfill me.

I learn by doing, but I also need theory. I like learning how things work. Just seeing something on paper is not always helpful. I think breaking something down to see how it operates is key to being successful. An instructor that shows by doing something is a valuable asset to being a gunsmith. 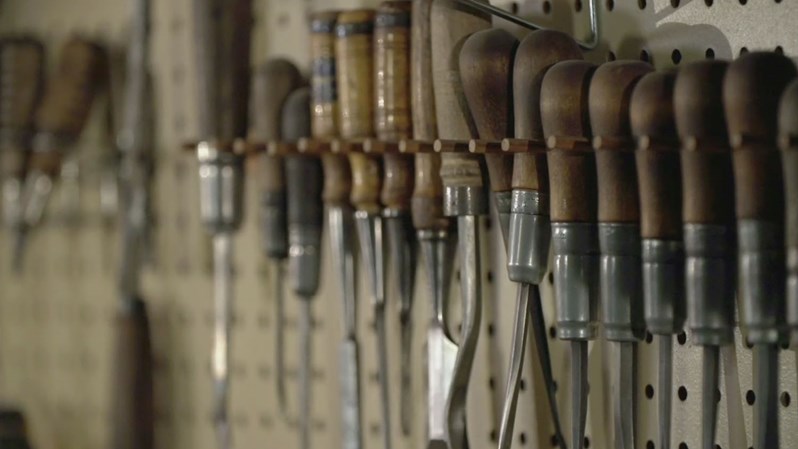 Someday I hope to open my own little gunsmith shop or maybe do some volunteer work, teach, work part-time for the military or law enforcement. I would deploy with the military if needed, I miss the rapport I had being in the Navy. I also have an interest in legislative affairs and doing more with it, but time will tell where that goes. The sky’s the limit.

Whether or not there’s a demand for my gunsmithing skills, I’ll always have my own guns or those of friends to tinker with. I plan to offer my services to the local law enforcement community as well.

In the meantime, I’ll be building a 6.5 Creedmor for my grandson and continue enjoying guns, hunting and fishing! It’s time to take care of me first, after the career I’ve already had.

Gunsmithing is a craft that has long been a part of American history and culture. Gunsmiths have been responsible for some of the most historic technological advancements in firearm history, their raw skills and artistry making them unique to the trade. The National Rifle Association understands the importance of this lost art and continually supports schools around the country that offer gunsmithing programs. Interested in becoming a gunsmith? Check out all the NRA Gunsmith Schools here.