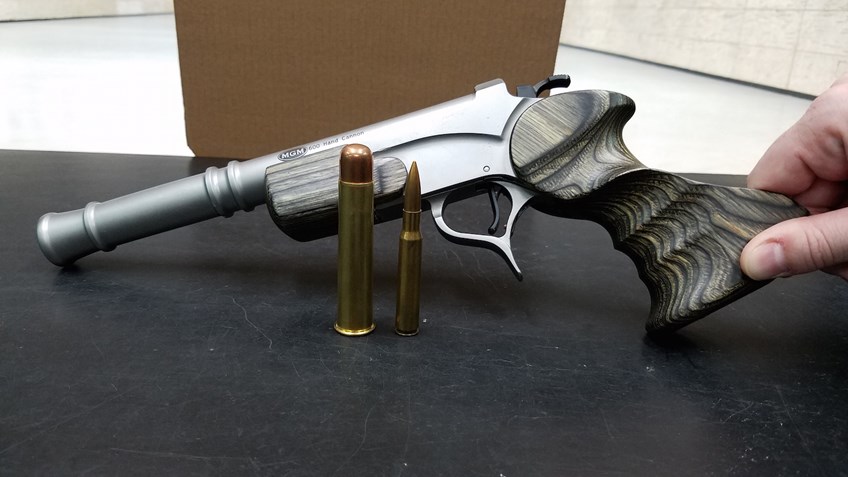 Wanenmacher’s Tulsa Arms Show bills itself as the “World’s Largest Gun Show.” With more than 4,200 tables spread out across 11 acres, I’d bet that claim is true. The show is open to the public for 18 hours over the course of two days, twice a year. To look at every table in 18 hours, you’d have less than 16 seconds at each table. Because of this, it’s impossible to see every cool item at the show.

Thankfully, working for the NRA Museums, some of the coolest stuff often comes to us. Such was the case at the November 2014 show. A friend of the Museum, Jackie S., came up to our table with two pistol cases and a twinkle in his eye. I wasn’t prepared for what was inside.

The cases held a pair of custom-made Thompson Center Encore pistols with 10” cannon-style barrels. Looking at the caliber designations on each, I was both amused and unnerved when I saw “.577 Hand Cannon” and “.600 Hand Cannon.” Right then and there, I knew that I had to experience them for myself. 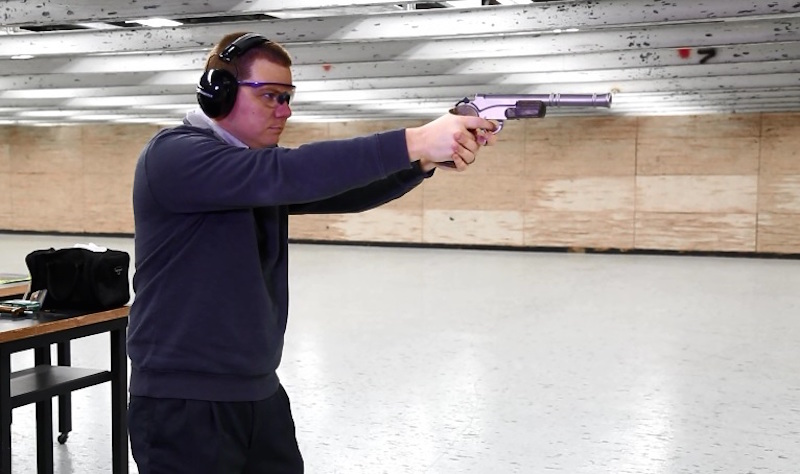 The guns returned with us from Oklahoma and went on exhibit in the NRA National Firearms Museum in Fairfax, Virginia, beginning in April 2015. Every day for almost two years, I eyeballed the .600 in the case, longing for the opportunity to take it to the range.

Fast-forward to March 2017 when NRATV’s Cam & Company wanted to do an “At the Range” video shoot at the NRA Range with unusual museum guns. Instantly, I knew this was my opportunity to touch off a round (or two) from that gun.

"Working for the NRA Museums, some of the coolest stuff often comes to us."
Wanting to know more about the history behind these modern-day hand cannons, I reached out to Match Grade Machine, which is the Utah-based company that made the barrels.

Match Grade Machine makes barrels in 24 different chambers, from .17 caliber varieties on the low end up to .50 caliber on the high end. Any of those calibers can be ordered in a configuration of your choice and is custom-made to order with a delivery time of approximately 4-6 weeks. If you happen to choose a configuration that is already in stock, it ships immediately.
Jackie’s request for barrels in .577 and .600 calibers were definitely special orders. Representatives from MGM put me in touch with an employee named Dylan, who actually worked with Jackie to make this project a reality.

When I asked him how these barrels came to be, Dylan told me that Jackie “always had an eye for the big bore stuff.” Jackie sent Dylan photos of old cannons for reference and he set to work designing the barrels. They made two pairs: one set that was 10” in length (which we have at the Museum) and one set that was 16.5” in length for Jackie’s personal use. Each pair took a full day on a lathe to make.

They machine the entire product – barrel, underlug, extractor, and locking bolt – in-house out of solid aircraft-grade steel, using a Fadal VMC 15 machining center. Workers then use manual lathes to ensure absolute precision in their barrels.

"After shooting the gun twice, I can confirm that it does indeed live up to the name, 'Hand Cannon.'"
Looking at photos of the gun, you’ll notice that it has no sights. There’s two reasons for this: for starters, there’s no way to accurately aim a gun that powerful. Second, Dylan didn’t want to mill away any exterior part of the barrel for sight channels because that would make it weaker in those spots.

After shooting the gun twice, I can confirm that it does indeed live up to the name, “Hand Cannon.” Even with slightly less powerful loads out of concerns for safety (both for me and the range backstop), it was still quite the beast to shoot.

The experience is one I won’t soon forget; and thanks to video, I won’t ever have to.