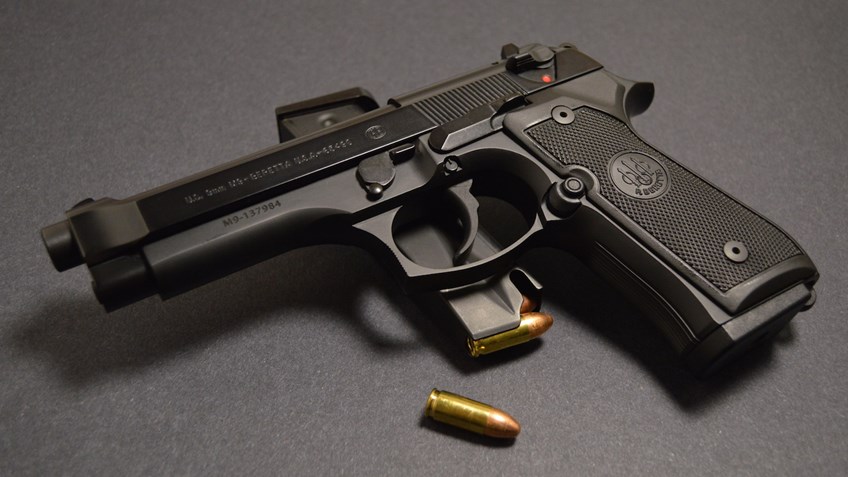 In late January, the U.S. Army announced a new service pistol, the Sig Sauer P320, replacing Beretta’s M9, ushering in a new era in the military’s firearm legacy. The changing of the guard presents the perfect opportunity to look back at the M9’s service history in our Armed Forces, which spanned more than three decades.

The M9 is a military-specification, or mil-spec, version of the Beretta 92 FS, a full-size 9mm pistol. The Beretta 92 FS is an upgraded model of the Beretta 92, which traces its beginnings to Italy, where designers Pier Carlo Beretta, Vittorio Valle and Giuseppe Mazzetti began initial design work on the pistol as part of Beretta’s “92 Project.” The 92’s overall design was a progressive development based on the Beretta Model 1951 Brigadier. 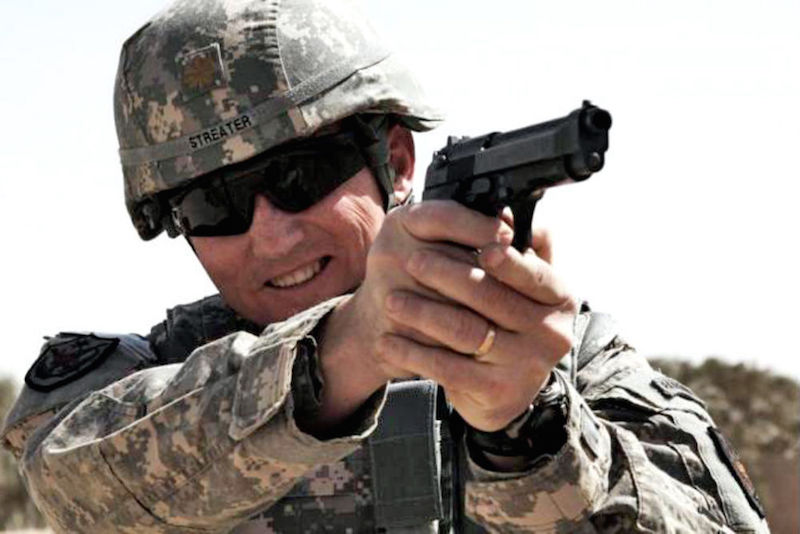 The 92 was officially presented as the Model 92 in 1975, initially adopted by Italy’s CONSUBIN, the nation’s equivalent to the U.S. Navy SEALs, and the Brazilian Army.

In 1978, the U.S. Department of Defense began the Joint Services Small Arms Program, tasked with trialing and selecting the new service handgun for the U.S. Armed Forces, aimed at replacing the aging workhorse M1911.

Managed by the U.S. Air Force, the first trials occurred at Eglin Air Force Base in Florida, where Beretta 92 went up against pistols from Heckler & Koch, Fabrique National (FN), Colt, Smith & Wesson, and others. The Beretta 92 FS outperformed all other pistols in the trials, but due to discrepancies in the testing protocols by the Air Force the results were invalidated, with JSSAP program managers deciding to run the tests again under Army management. 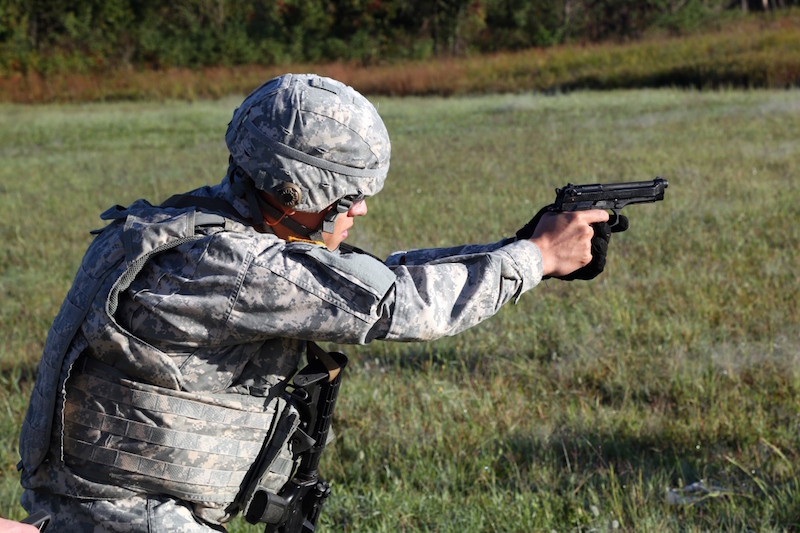 Regardless of the Air Force and Army’s qualms, the U.S. Navy purchased Beretta’s 92 Series pistol, which featured an ambidextrous safety lever, reversible magazine button, checkered grips, and other features designed to meet the JSSAP specifications.

After the Army’s cancellation of the procurement and controversy following the second trials in 1983, the third trials, named the XM9 Program, in 1984 resulted in two competitors vying for the coveted U.S. military contract – Beretta’s 92 SB-F, an improved Model 92 with modifications derived from the demands and results of the U.S. military’s testing, and the Sig Sauer P226. The 92 SB-F featured a combat-style trigger guard, chromed bore, upgraded grips and Beretta’s enamel Bruniton coating.

On April 10, 1985, the U.S. Army announced the results, selecting the 92 SB-F as the new service pistol and designating it as the M9 pistol (technically, “Pistol, Semiautomatic, 9 mm, M9.) The DoD’s first order was for 315,930 pistols at a cost of about $75 million, and the M9 became the standard sidearm for all branches of the U.S. military. 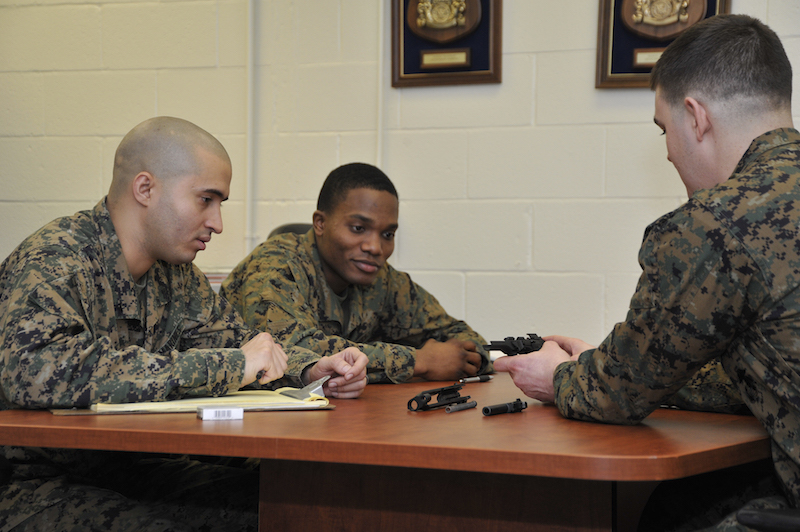 This was particularly noteworthy, as it was thought improbable for a foreign company to usurp American manufacturing for the military contract. The reliability and ruggedness of Beretta’s design overcame political, legal and technical obstacles, however, and cemented its place in firearm history.

“The Beretta family, company, and Italian industry can take justifiable pride in doing what to many seemed the impossible: a foreign-based company winning the contract for the U.S. Armed Forces sidearm a historic first of major significance,” said famed firearms author R.L. Wilson in his book, The World of Beretta: An International Legend.

The service-ready M9 was a semi-automatic pistol chambered in 9x19 Parabellum, built on a short-recoil action. The M9’s muzzle velocity is 1,250 feet per second, with an effective firing range of 50 meters. The M9 feeds from a 15-round detachable box magazine, and feature onboard iron sights.

In 1987, Beretta issued a commercial version of the 92 SB-F, simply named the 92F. That same year, production of both the M9 and 92F began at Beretta’s U.S. manufacturing facility in Accoceek, Maryland. The M9 saw its first deployment in the hands of U.S. forces during 1989’s Operation Just Cause, wherein the U.S. invaded Panama to depose dictator Manuel Noriega.

The M9 went on to serve with the U.S. military in its various conflicts and operations around the globe, from Operation Desert Storm in 1990, missions in Africa and eastern Europe in the late 1990s, the Iraq and Afghanistan wars of the 2000s, and into today. 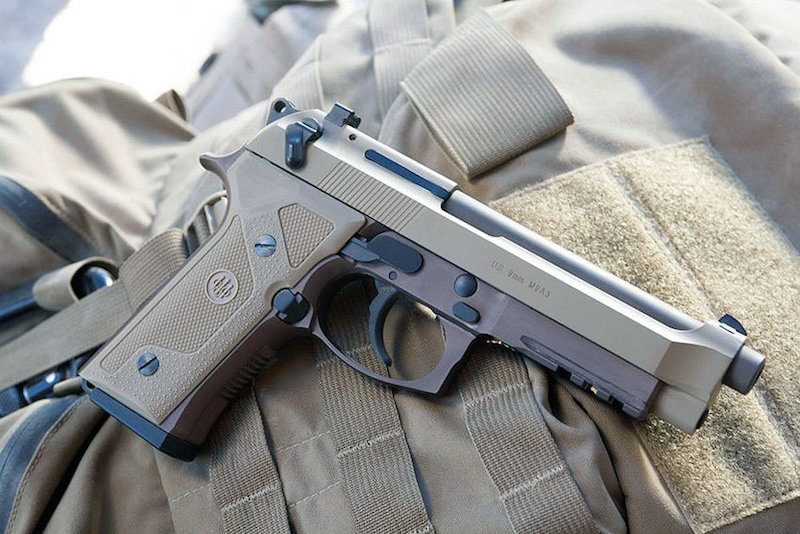 The year 2006 saw the updated M9A1, which featured a one-slot Picatinny rail for attaching lasers, lights and other peripherals. A beveled magazine well allowed for easier reloading, and a physical vapor deposition (PVD) coating was developed by Beretta to make the pistol more impervious to the austere desert conditions of battlefronts in the Middle East. These improvements were made to meet the combat demands of the U.S. Marine Corps.

The M9 and 92 FS had now served for 25 years in the hands of millions of U.S. military members, law enforcement personnel and military partners around the world. However, just like the eventual replacement of the vaunted M1911, the M9’s days were numbered, with the DoD looking ahead for the next technological advancement in small arms to keep our military’s combat edge sharpened. 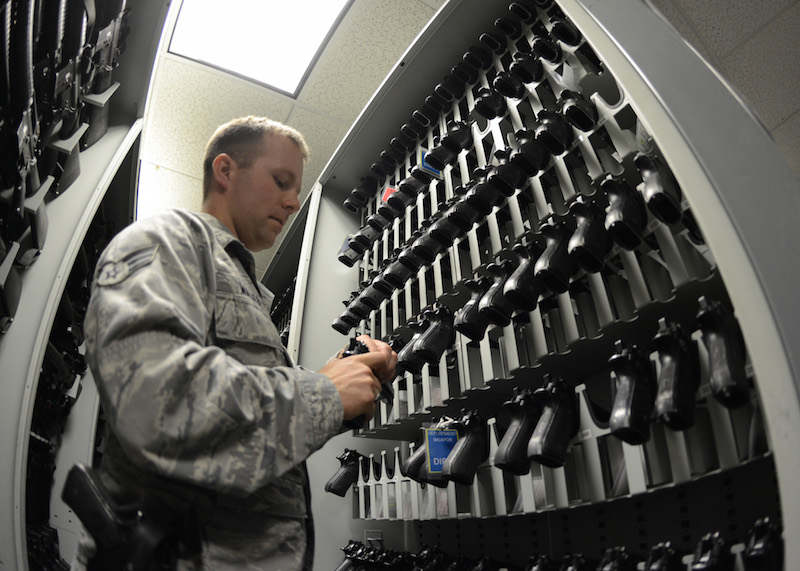 In 2014, the U.S. Army announced new pistol trials, the U.S. Armed Forces Modular Handgun System competition, to determine the replacement for the M9, with 12 manufacturers – including Beretta with their APX pistol – entering the fray. Meanwhile, a 2015 update to the M9, the M9A3, improved the Picatinny rail from one to three slots, boosted magazine capacity by two rounds to 17, reengineered grips, slide and removable sights, and introduced new materials to make production more cost-efficient.

Despite the improvements to the M9 and the introduction of the APX in the Army competition, the legendary Italian arms maker failed to make the final round of the latest pistol competition. Sig Sauer, who narrowly lost the previous competition to Beretta, won the contract over Glock, and the U.S. Army announced the selection of the Sig Sauer P320 as the new service pistol at SHOT Show 2017 in Las Vegas.

While the military is moving forward with Sig Sauer, hundreds of thousands – potentially millions – of M9 and 92 FS pistol will continue to serve U.S. service members for years until adequate numbers of P320s can be fielded. Even after their government service tenure, the Berettas are likely to wind up in the surplus firearms market, continuing to see use amongst commercial customers. 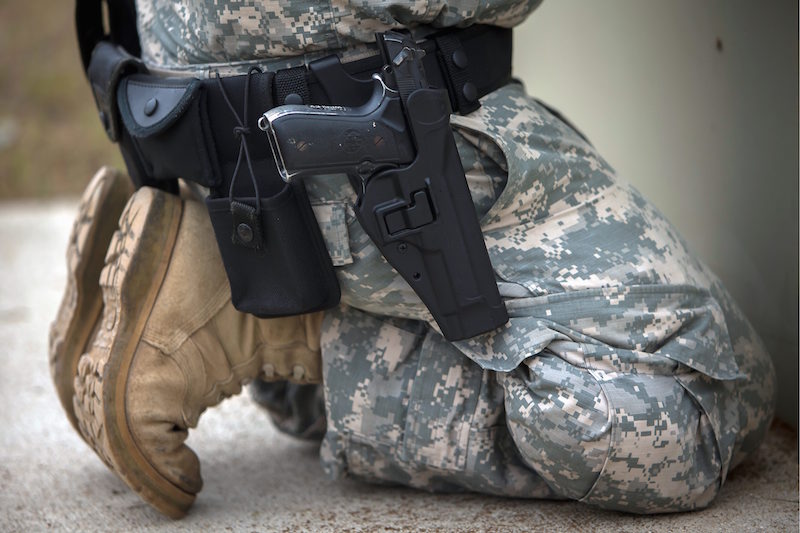 Change isn’t easy. While many in the military community offered criticism of the M9’s accuracy, reliability, weight and other factors, the sidearm has been a mainstay of the U.S. military for more than 30 years, with entire generations of American warriors training with it and taking it into battle. Personally, when I joined the Air Force, I had never fired a gun in my life, and the first pistol I ever used was a Beretta M9 during Basic Military Training.

The upgrade may be what the U.S. military thinks is best for their future, but there’s no denying the place the M9 has secured in the annals of firearms history.