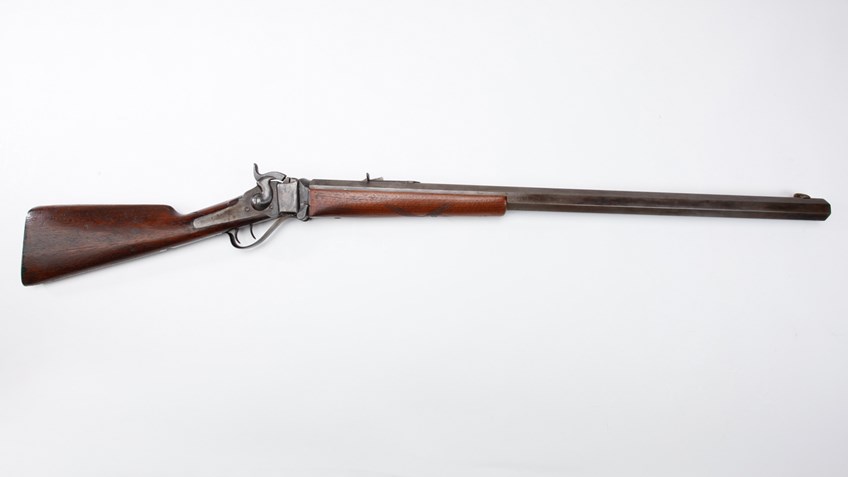 Many firearms in the NRA National Firearms Museum have come to the collection with limited provenance. However, over the intervening years, our staff has been able to piece together the trail of history that allows us to reveal the story of where these firearms have been.

One of the best examples is a Sharps rifle, originally chambered for the .45 2 7/8 cartridge or the .45-100 round. This Model 1874 Sharps arrived in the collection in 1975 and really had no history attached to it other than being an old gun from a donor in Montana. There were features on the rifle that provided some clues. The heavy barrel, the double-set triggers, and the powerful chambering, all pointed towards a big game rifle of the 1870s. 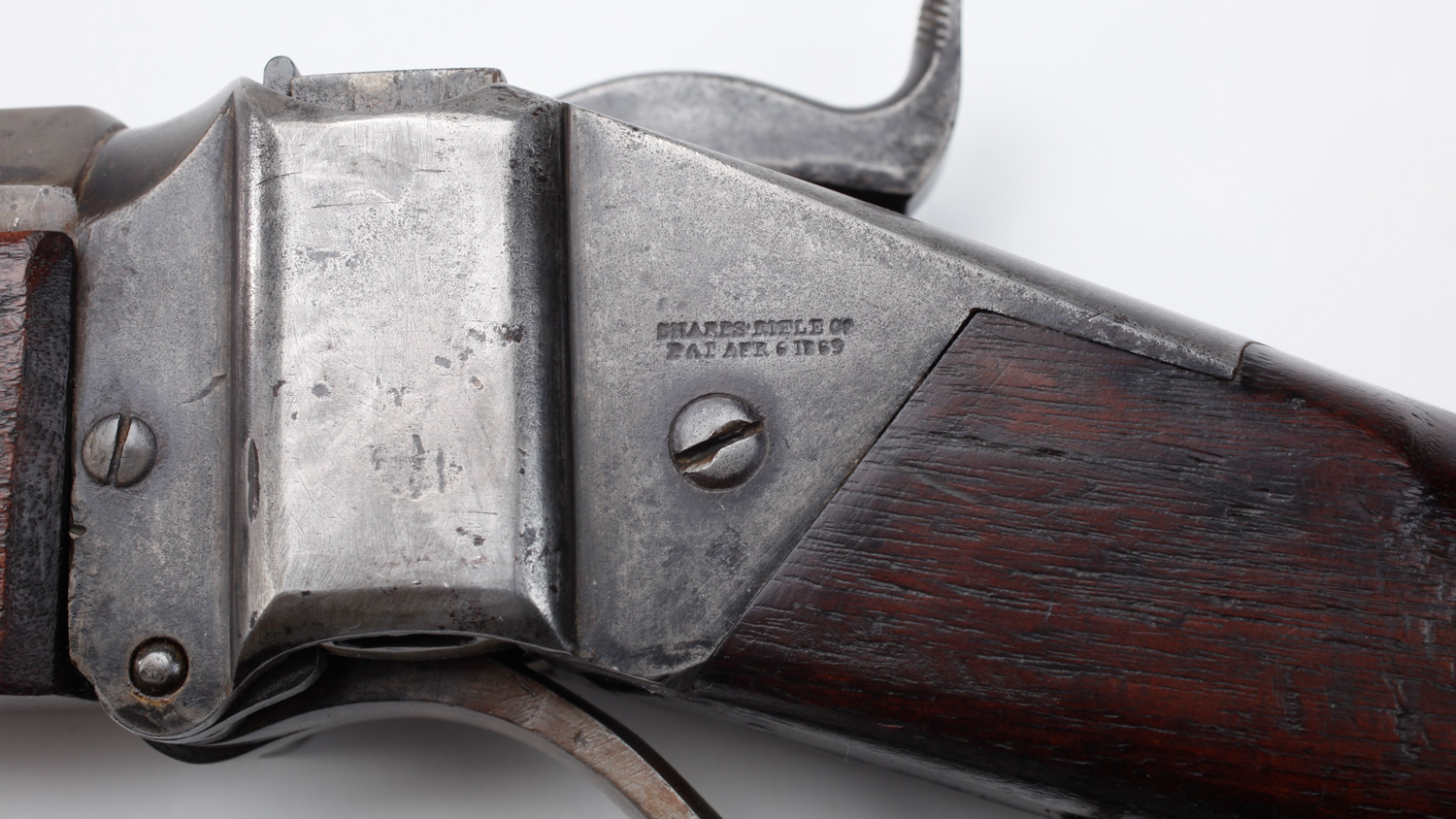 In the far West, hunters followed buffalo herds in two main regions: north and south. In the north, bison traveled through the states of Colorado, Wyoming, and Montana. This was considered the northern herd that could be hunted only during certain months of the year as bad weather limited access. In the southern states of Kansas, New Mexico, and Texas, another herd could be hunted nearly year-round. As a result of this, the southern herd was the first one decimated.

Looking over the Sharps rifle, wear patterns indicated that this gun had been shot a tremendous amount. What looked to be a replacement forestock was crudely hand-checkered. This is likely in an attempt to provide traction during firing as the recoil of a .45-100 cartridge was impressive. The “100” in the caliber designation meant that a hundred grains of blackpowder could be packed into the long brass cartridge case behind a soft lead projectile. The double-set triggers were another indication that the rifle was a hunting arm as these triggers were not permitted in target competition at ranges like Creedmoor on Long Island. The weight of the rifle – nearly sixteen pounds – also exceeded the limit for Creedmoor competition and this overage was easily accounted for in the size of the barrel which is a massive octagonal item. 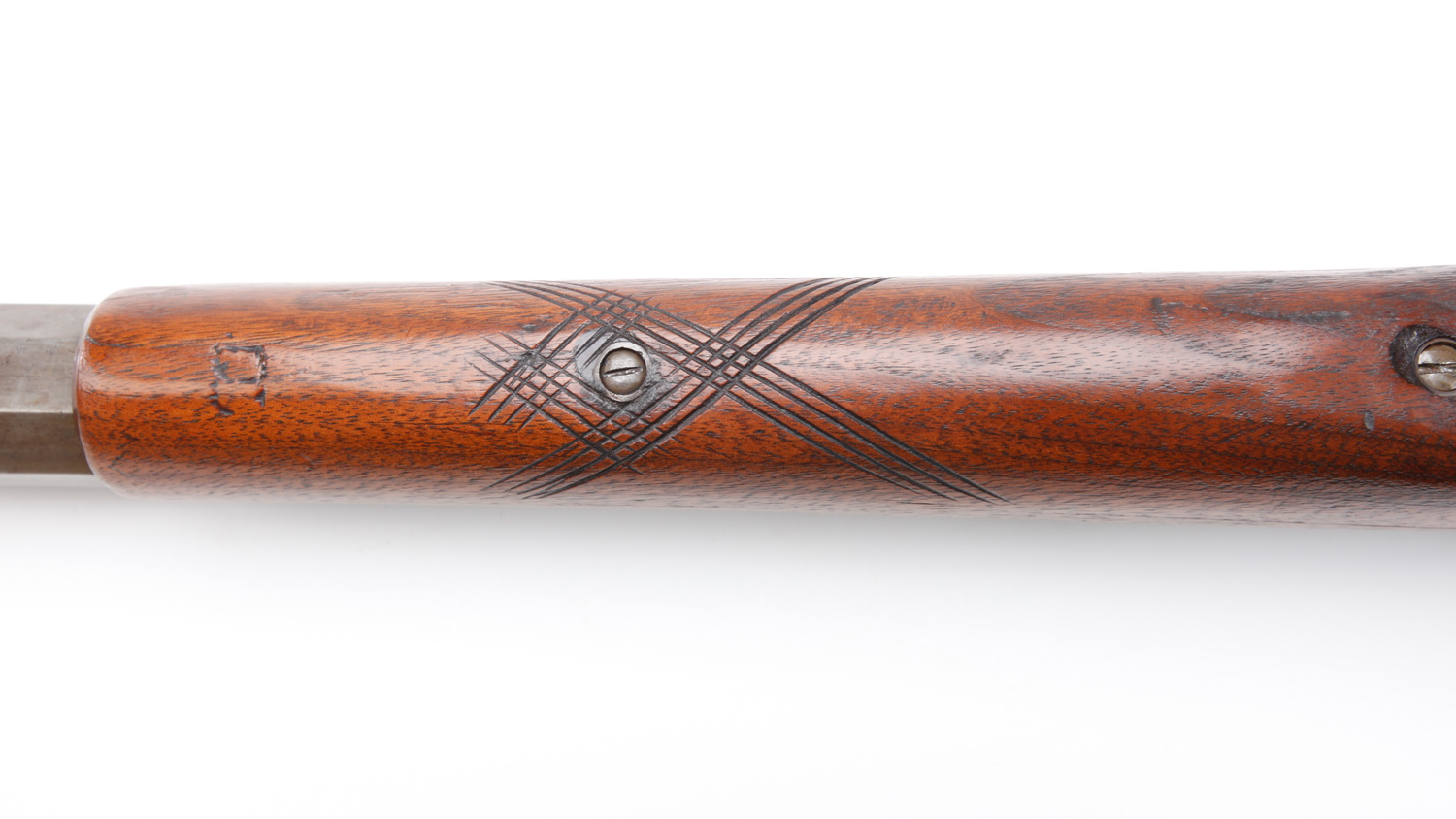 Dating the rifle could be approximated by the “Old Reliable” stamp on the barrel. This particular marking began in 1876 at the Sharps factory, therefore, this rifle would have dated after that time period. The rifle itself could provide only so much information - but there was a way to find out more.

Museum staff contacted Dr. R.L. Moore in Philadelphia, Miss., to see what the Sharps factory ledgers might disclose. During his collecting years, Dr. Moore had acquired the ledgers and offered a “factory letter” service for individuals looking for the past history on their Sharps. On September 5, 1990, Dr. Moore sent a letter back the National Firearms Museum. Our Sharps rifle had been located in the factory ledgers. 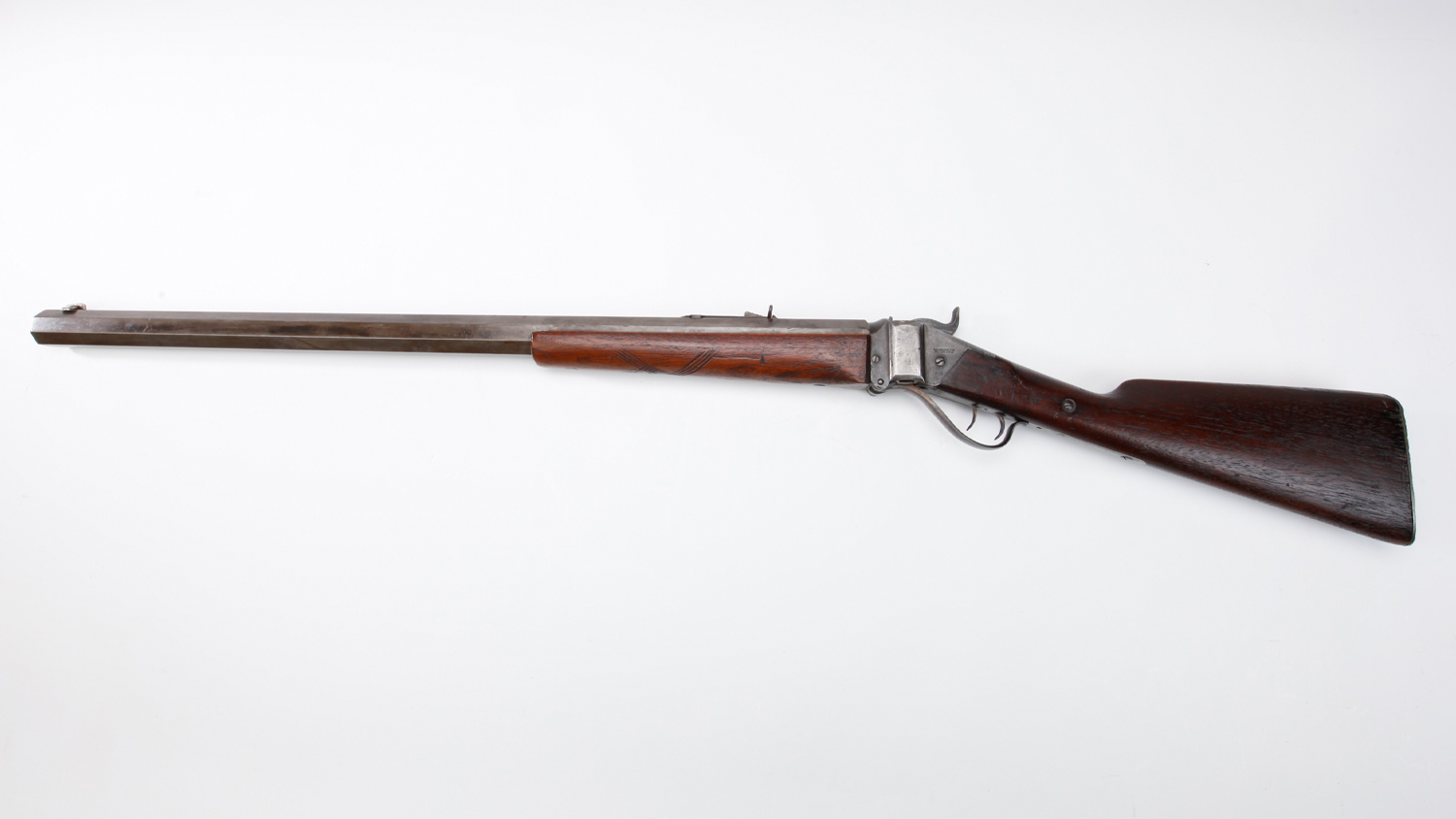 On October 29, 1877, the rifle had been shipped to Conrad & Rath, a famous western dealer located in Ft. Griffin, Texas. The Sharps company records described this rifle as a Model 1874 Sporting Octagon Rifle with a full 30 inch barrel of .45 caliber for the 2 7/8 inch case. It was also fitted with double-set triggers, open sights, and an oil-finished stock. The price, in 1877, for all this came to $46.00. Where the rifle was shipped was equally interesting. Ft. Griffin was established in 1867 on land between the West Fork of the Trinity River and the Clear Fork of the Brazos. While initially a military fort, it soon attracted those who set up a variety of businesses – legal and otherwise. It was here that Wyatt Earp first met Doc Holliday, in Shaunissey’s saloon. Any vice desired could be found in this “Babylon of the Brazos.” More than 186 Sharps rifles were shipped to the Ft. Griffin dealers, but the fort itself was to close in 1880 and the related civilian dealers also had shut down by then. 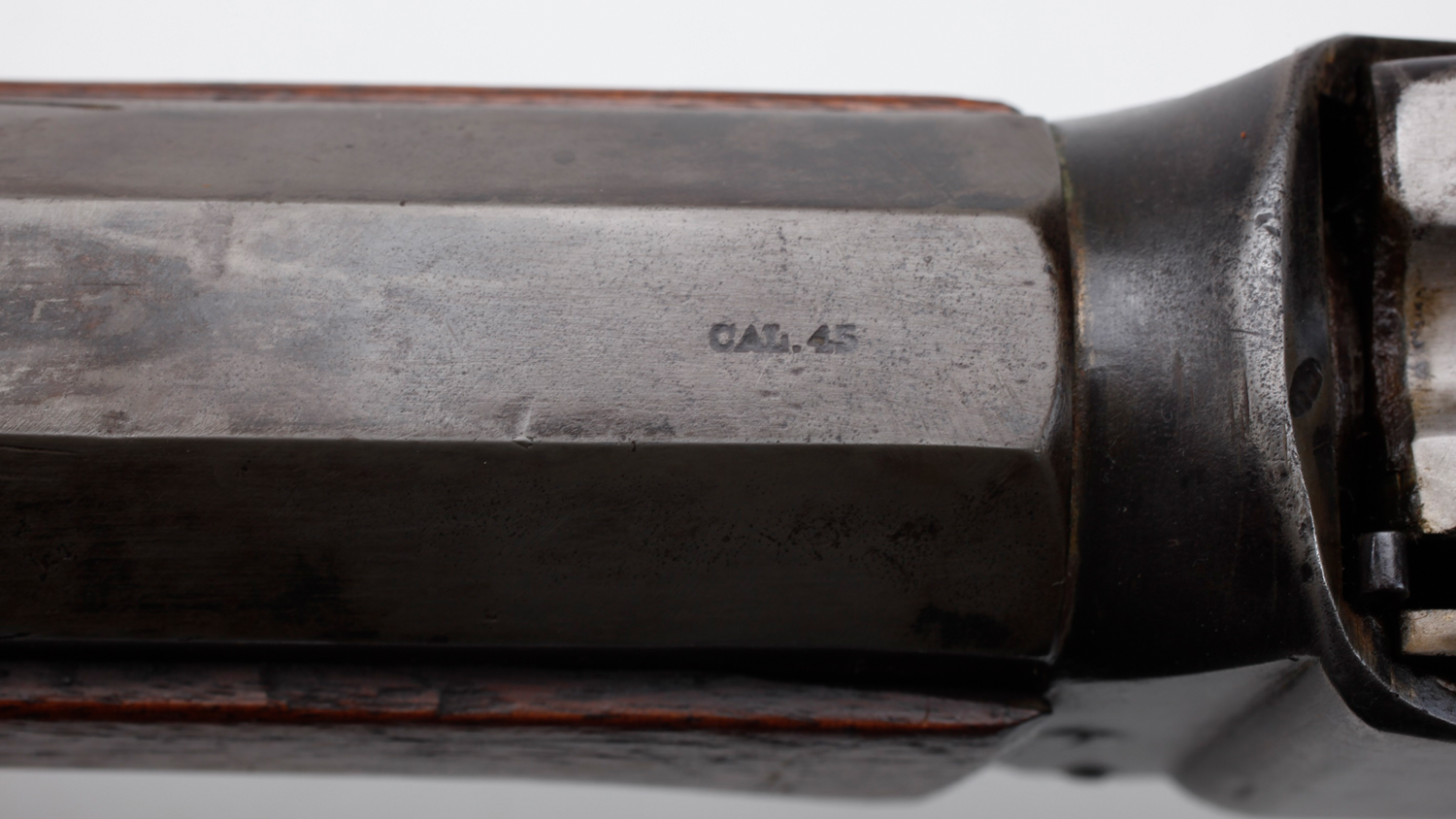 By 1877, the southern harvest in buffalo hides was dwindling, but hunters continued to resupply at Ft. Griffin and head outwards in wagons. With a buffalo rifle such as this one, an excellent shot could bring down a buffalo bull at distances out to 500 yards and could continue to shoot at surrounding buffalo until the herd moved off. There are records of 70, 80, and 100 buffalo being shot at one time. In the dry Texas heat, a good team of skinners would strive to keep up with the shooters.

In 1877, following the Red River Campaign of 1874 that culminated at nearby Palo Duro Canyon, most of the Native American competition for the buffalo had been eliminated. Just three years before, in 1874, another M1874 Sharps rifle in .50 caliber had been employed at long range at Adobe Walls in Texas to drive off Indian attacks. 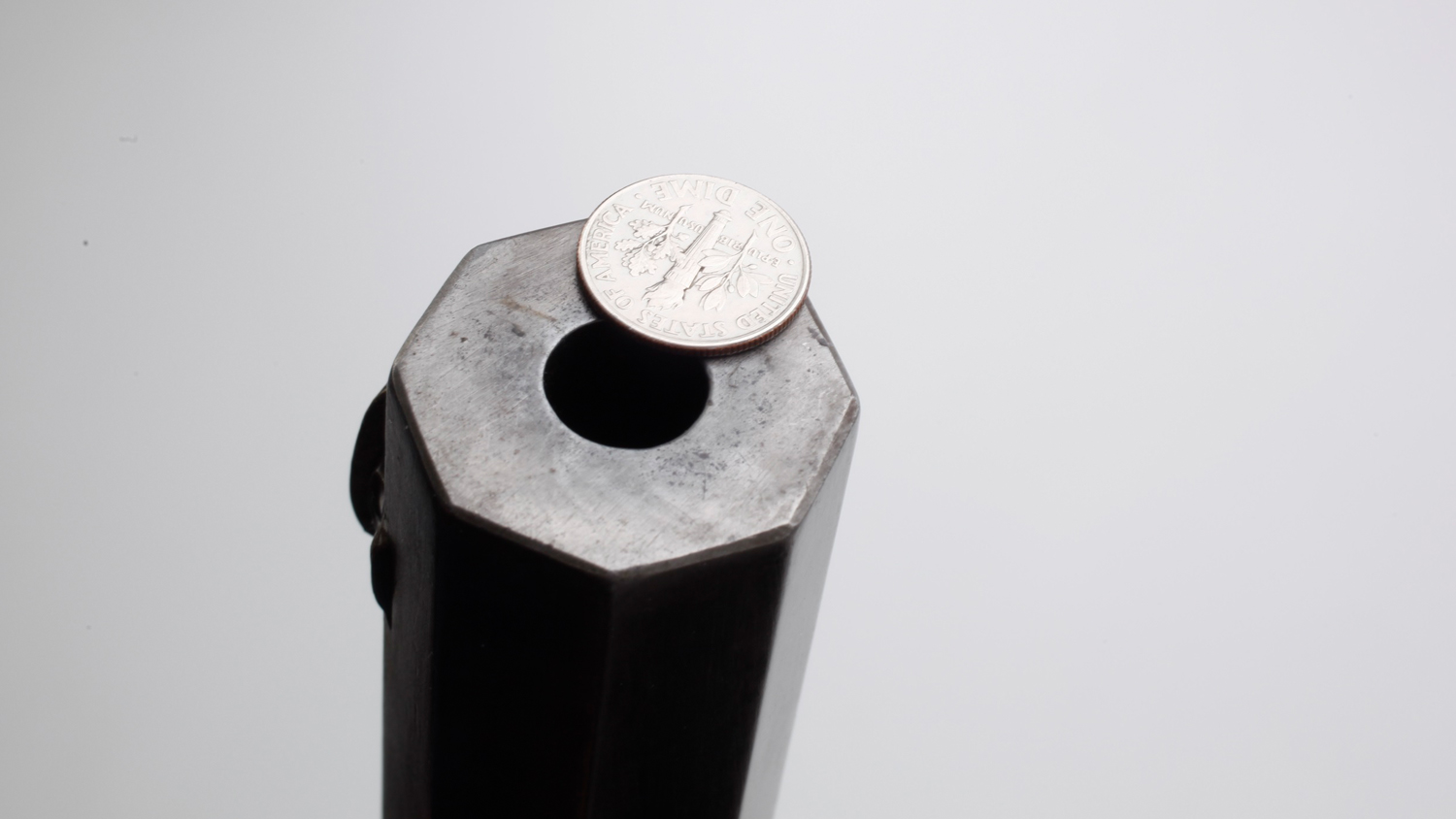 We can’t ever know how many buffalo this one rifle might have taken in Texas, but with its later donation coming from Montana, it is very possible that the same hunter who bought it in Texas then traveled north to continue their harvesting of buffalo. Eventually, both herds were wiped out and only scattered remnants in Canada survived. But the lesson of the buffalo was not lost on American hunters and naturalists in later years. The laws that were set up to protect and replenish game species came from the unregulated slaughter out on the plains. Brought back from the brink of extinction, the American buffalo continues to thrive in the West and other locations.

Today, this powerful single-shot Sharps is displayed in an exhibit that captures the Western frontier where it can continue to tell the story of buffalo hunters and soldiers while also drawing attention to its unique features like many historic arms of the period.

Check out this exceptional rifle by visiting the NRA National Firearms Museum in Fairfax, Va., or click here to view the galleries online!