Recoil Mechanics: How To Manage Recoil and Be Accurate

Andy Lander is the NRA Training Counselor Program Coordinator in NRA’s Education and Training Division. A graduate of Virginia Military Institute, Andy has been a competitive shooter since 1996, competing in NCAA smallbore rifle. Now, as a training counselor, he’s aided as a technical advisor for firearms training videos and television programs, contributed to firearms training books and lesson plans, trained actors, professional athletes and dignitaries, and has certified thousands of firearms instructors and instructor trainers in the NRA Training Programs.

Many action pistol shooters have the desire to press the trigger as fast as possible while keeping all shots on a target the size of a pie plate when competing. As Ricky Bobby put it in Talladega Nights, “I wanna go fast!” This concept is known as “flash sight picture,” or defensive accuracy. A lot of competitive shooters think if they mash the trigger hard and fast, they’ll be better shooters. Well, that’s not really how it works.

Before diving into techniques and drills, we first need to know what the eight cycles of operation for a semi-automatic pistol are:

These cycles can also be found in the NRA Range Safety Officer Student Study Guide.

Knowing these cycles leads us to the ultimate question: how to conquer recoil? There is a lot of movement and energy throughout the firing process, during which the user must remain in full control. This control not only ensures those eight cycles are uninterrupted, it prepares the firearm for follow-up shots.

Personally, I grip a gun very firmly. This is something I encourage my students to do as well, as this helps the shooter control the pistol when firing rapidly. The master grip, as mentioned in a previous article, is gripping the gun high on the back strap of the pistol while the support hand presses into the frame, and the shooting hand thumb rests on top of the support side thumb. This alone will help you better manage recoil while building up speed and shooting more accurately.

My stance is a forward lean, similar to athletic stances, which helps take up and absorb some of the recoil. The firing side foot is slightly behind the support side foot. The belly button, nose, and toes are all indexed forward towards the target. 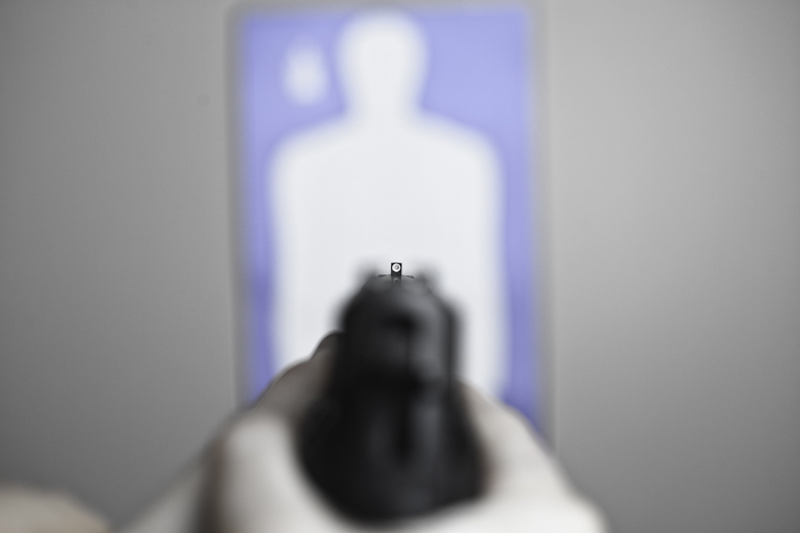 Once you establish correct grip and stance, front sight focus is the next step. The human eye can track objects very quickly – up to the equivalent of 60 frames per second. This means the speed at which the human eye can see and process information is fast relative to shooting, making it possible to track your front sight through recoil. This is extremely important for firing a follow-up shot if needed, and the ability to “call your shot.”

Another way to approach this, which is instructed in the NRA Carry Guard Level I Training, is that for every shot you take you should see two sight pictures: a “before” picture and an “after.” This will make you focus hard on the front sight even while the gun is recoiling – helping you “call your shot.” Once you are able to identify what your gun is doing throughout the shooting process, you’ll be capable of correcting errors in your shooting.

The last consideration is the trigger press or pull. A bad trigger press is the cause of nearly all errors in shooting mechanics. Most shooters develop a bad press because they anticipate the loud report, flash of fire, and slight movement of the pistol happening right in front of their face. Shooters can work on this at home by dry-fire practicing, but only at a safe backstop. Once you are back on the range, apply proper grip pressure, and repeat the mantra “front sight, slack, press.” This has repeatedly and reliably helped me get on the sights quickly and control the trigger by moving it straight to the rear. (We’ll discuss the nuances of trigger control in a future article.)

After going through the mechanics and learning how to control the gun, learn how to focus and pay attention to what the gun is doing in order to build up speed. The best way to work on improving speed is to train with a shot timer. The timer is realistically the only way to measure how fast one can actually shoot before they “outrun their own headlights.” Shooting practice should be like lifting weights -- you need to know what you can do and where your failure points are so that you can get faster. Keep a logbook of your drills, times and any malfunctions of your gun as a reference.

These training tips are a great place to start, but mastering these concepts takes time, effort and guidance. The best way to learn these and other important shooting skills is by enrolling in an NRA Basics of Pistol Shooting Course, taught by NRA Certified Instructors. For those looking to take their skills to the next level, the self-defense and concealed carry training taught in the NRA Carry Guard Level 1 course is the most comprehensive training available.

In the meantime, check out this NRA Firearm Science video in which competitive shooting champions Jessie Duff and Tommy Thacker explain the effects of recoil!