History awaits this November at the Henry 1000 Man Shoot 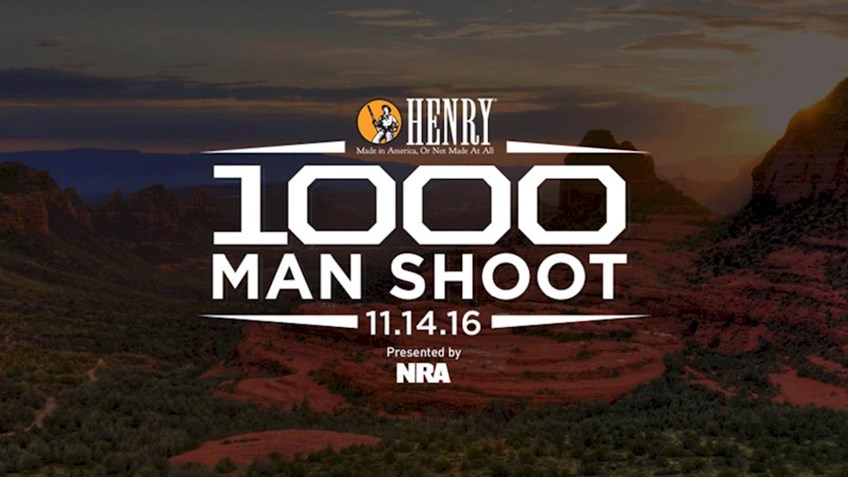 In an instant, the flat expanse of the Arizona desert will ring with the song of liberty, as 1,000 people will line up and simultaneously fire 1,000 rifles at the Henry 1000 Man Shoot Presented by NRA, scheduled for Nov. 14, 2016, at Phoenix’s Ben Avery Shooting Facility.

Most significantly, the feat of firepower will set a world record for the most shooters firing a volley at the same time.

Henry Repeating Arms President Anthony Imperato envisioned the spectacle while meeting with NRA staff members, and together with the organization, worked to make the vision a reality.

“This event is all about showing a sense of patriotism, community and camaraderie,” Imperato said. “Plus, we can all come together and have some fun.”

Imperato ordered the production of 1,000 unique Henry Golden Boy Silver rifles, beautifully crafted American-made (or not made at all!) lever action rimfire rifles chambered in the legendary .22LR caliber. The rifles feature ornate engraving furnished by Baron Technology Engraving, and will chamber Winchester Ammunition during the history-making shoot.

While some rifles were purchased by the shooters that registered to wield them during the event, the others will be donated to The NRA Foundation and put up for auction, with proceeds benefitting the Foundation’s charitable works.

Imperato scheduled the historic event to follow the Nov. 8 Presidential election to usher in a new era in the United States, one way or another.

“It’s no coincidence this event happens just a week after the Presidential election. Whether we get a President that supports the Second Amendment, or one that does not, we should never be asleep at the wheel and must continue to fight for our freedoms,” Imperato said.

Regardless of what the country’s new leadership brings, Henry is literally sticking to its guns – which are all proudly made in the United States – bringing in 1,000 proud Americans to send a loud and message to the powers that be.

For more information on the Henry 1,000 Man Shoot Presented by NRA, visit https://1000manshoot.nra.org.