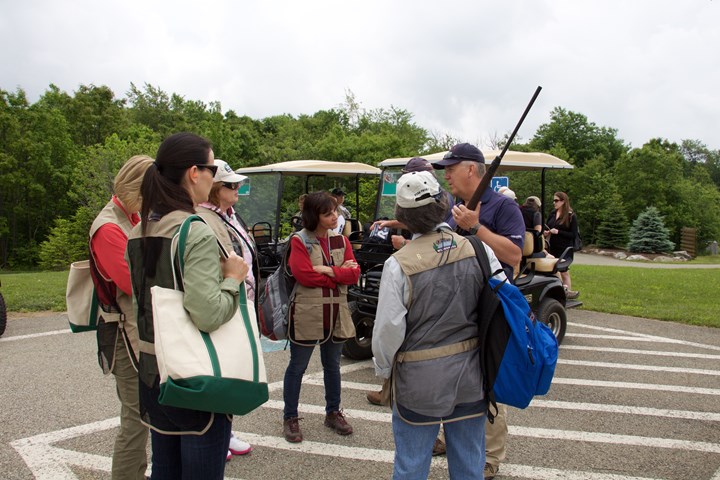 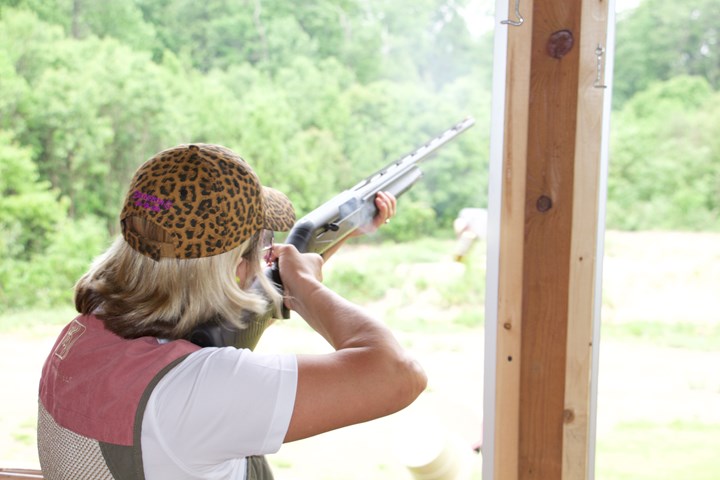 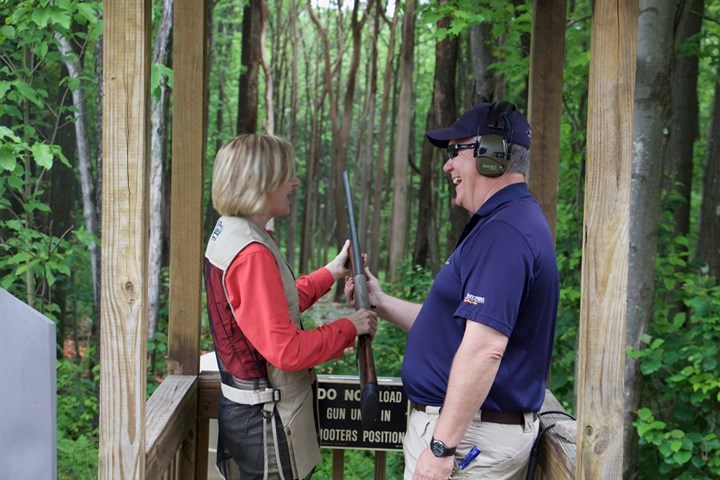 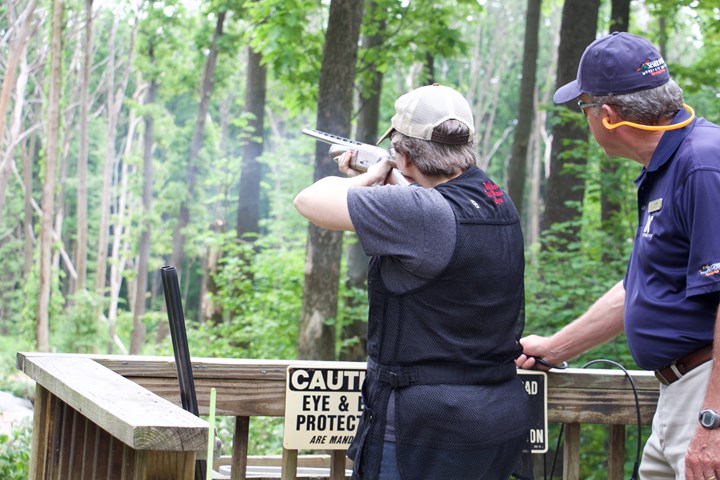 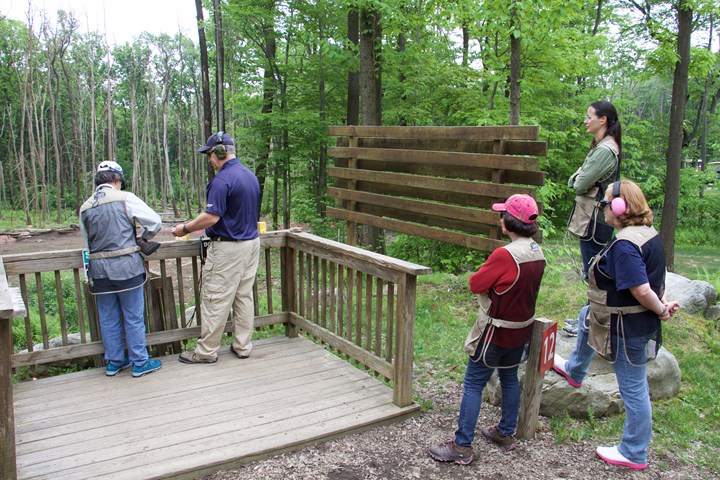 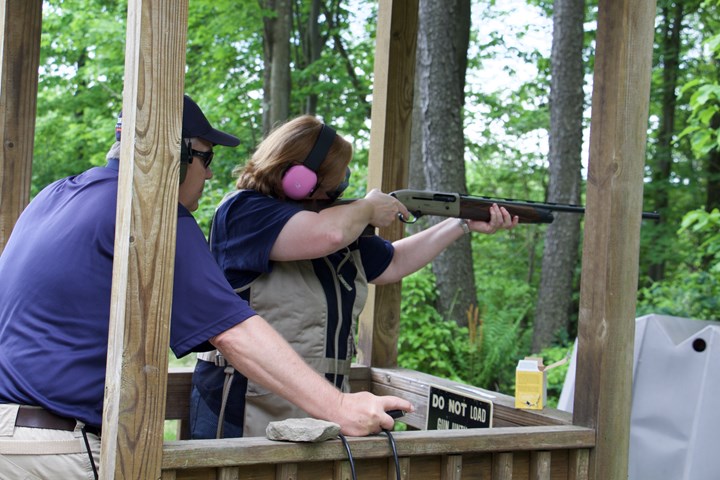 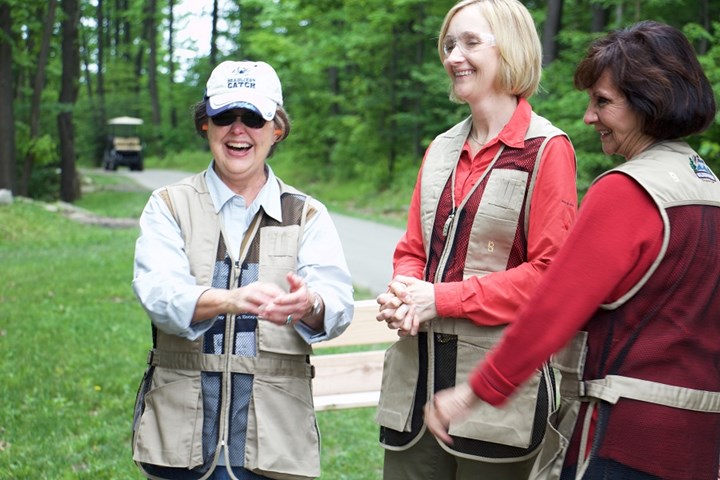 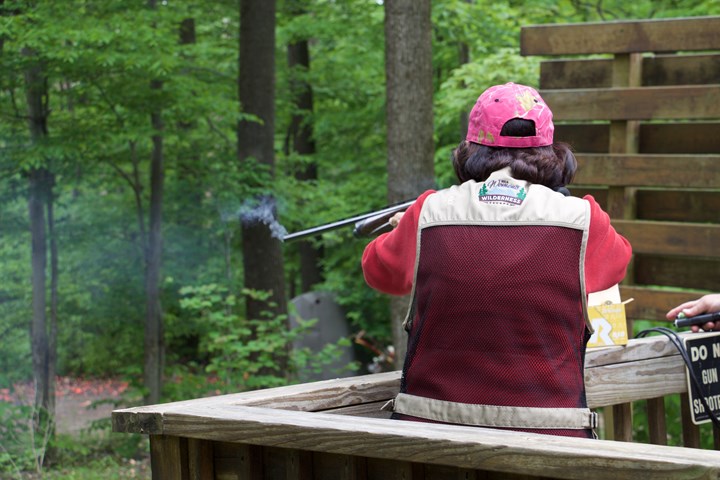 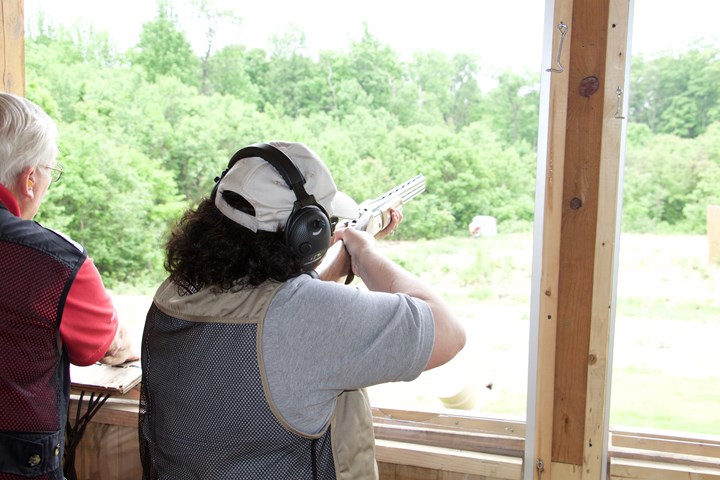 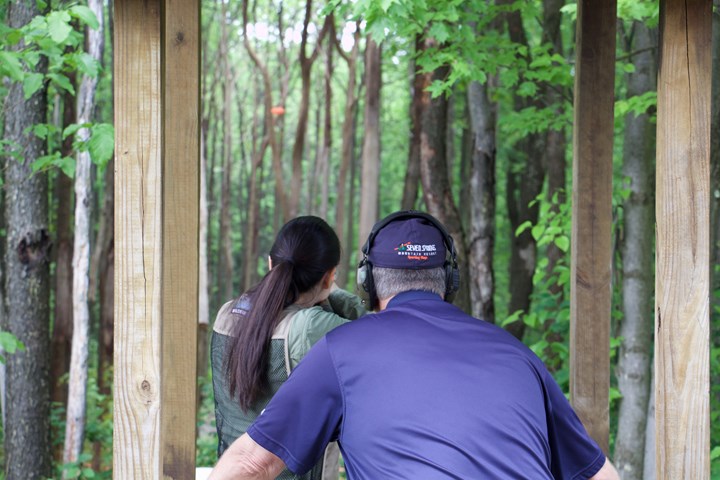 1 of 1
More
SUBSCRIBE
Saying that the NRA Women’s Wilderness Escape at Seven Springs was fun would be an understatement. It was an amazing weekend of shotguns, relaxation, and building friendships. Women from Wisconsin to Massachusetts to Georgia ventured to Seven Springs Mountain Resort in Pennsylvania for the escape of a lifetime.

The main focus of the weekend was sporting clays. Some ladies had shot a shotgun once before, some shoot regularly. Some were hunters while others were recreational target shooters. Experience levels varied, but that didn’t get in the way of a great time.

While I was at the escape, I joined a group of three awesome women out on the sporting clays course. We began the day with a little practice at 5-stand, where they received one-on-one time with NRA National Shotgun Coach Trainer Don Sipes. I was eager to hear their stories and learn more about why they came to the escape. So while they rotated turns, we got to talking... 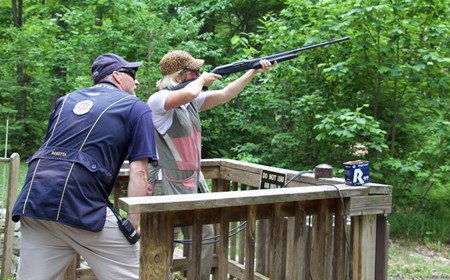 I first spoke with Julie Boxx. When Julie saw Women’s Wilderness Escape pop up on her Facebook Newsfeed, she signed up with her friend Pat immediately. They both knew it would not only be a great weekend getaway, but a chance to improve their shooting skills.

Julie first learned how to shoot when she was a little girl. She would spend hours setting up cans, shooting her father’s pellet gun, and knocking them down. Julie loved shooting so much that she even passed down her knowledge to her younger sister.

Julie didn’t begin target shooting until she married her husband, a fellow gun lover. They then got a German Shorthaired Pointer named Emma and began training her to hunt pheasants. While Julie regularly hunted with her husband and Emma, she had only shot at clay birds a few times prior to the escape.

Julie came to the escape to learn better form when shotgun shooting. She said the instruction she received both in the classroom and on the course was very helpful and informative. She was even able to correct a couple of bad habits like keeping her eyes on the clay instead of the barrel and to always keep her weight on her front foot. Julie was in a group with two other women (who you’ll meet in a bit!) that she’d never met. “I shot with two people I didn’t know and we all had strengths and weaknesses. My favorite part was over coming difficult shots and being with people who appreciated when you were able to work pass your issues and break the targets!”

Julie left the escape feeling even more confident in her shooting ability and learned a lot from the instructors and her group. She plans on taking what she learned home to practice and join friends and family weekly on the sporting clays course. “I personally believe that once you gain confidence in your ability to handle a gun, you [can] shoot with anyone male or female. 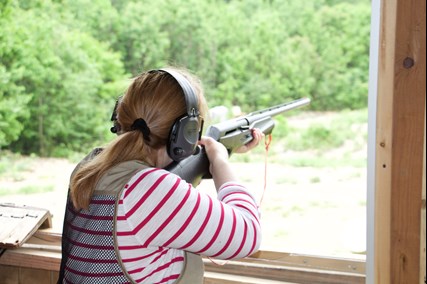 Next, I met Cori Ryan, a NRA Women on Target Instructor and NRA Home Firearm Safety Instructor. As an instructor, Cori explained how she’s noticed many women tend to take firearms training courses and just practice at the range every now and then. Meanwhile, men are more likely to continue with their firearms training and join clubs to shoot recreationally. She believes this may be because of limited clubs and events just for women shooters. When she learned about Women’s Wilderness Escape, she jumped at the chance to come. She was also excited to be a student, as a nice change of pace, instead of the instructor.

Cori had previous experience with rifles and handguns, but only shot trap once. She came to the escape to learn the basics of shotgun shooting and to hopefully hit a clay or two! “Before the escape, I shot a shotgun like a rifle, but the instructors at the escape helped me to keep my body moving so that I could hit my targets. Now I am confident enough to get out there and try the sport in ‘real life!’”

Cori believes it’s important to educate other women about firearms not only for safety and self-defense but for recreation as well. She continued to explain that events like Women’s Wilderness Escape is a fun way to get women, who may not have had the opportunity when they were younger, to learn a new sport and engage in something fun.

When the escape was over, Cori did not want to leave! “I enjoyed stepping out of my everyday life and into what felt like a luxury summer camp. It really was an escape for me. My favorite parts were the individual instruction with top-notch instructors who were encouraging and effective, the gourmet meals, the spa, the horseback riding, and the paint party. I also really enjoyed the company of the women I met on the trip. We had a great group!” 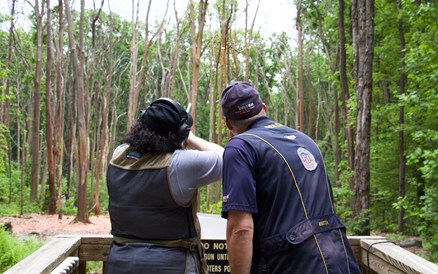 Before we began moving back onto the course, I began chatting with the third member of the group, U.S. Navy Veteran Sheryl Sammons. Sheryl came to Women’s Wilderness Escape as a fairly experienced shooter. She grew up around firearms and started hunting as a teenager. She then began training with handguns when she joined the Military and now frequently goes to the range for date night with her husband. She loves that firearms are not only a common interest they share, but a fun way to learn and spend time together.

Before the escape, Sheryl had participated in sporting clays tournaments and fun shoots. But even experienced shooters, still seek improvement. She came to Women’s Wilderness Escape to work with the skilled instructors, improve her shot, and work on developing her skills correctly. Sheryl’s life gets pretty busy trying to balance between work and family. So as a big thank you for all that she does, her family signed her up for the escape as a special Mother’s Day present! “I’m using this weekend as my own mini-vacation!”, Sheryl exclaimed. “A weekend getaway to meet other like-minded women and practice a sport you love? Best trip ever!”

While Sheryl was drawn to the shooting aspect of the weekend, she was also excited for the all the activities at the resort and bonding with the other ladies. By the end of the escape, Sheryl was not only relaxed but a more confident shooter. She was able to work on her form and her shots became much more consistent. Now she’s ready to take what she learned to her next sporting clays competition!

My time spent with these strong and incredible women was nothing short of amazing. Learning about their various backgrounds, watching them develop their skills and having fun together was incredible. I was fortunate to even shoot a couple of clays with them! These women all came to the escape for different reasons, but all left as more confident shooters and better yet, friends.

Check out the gallery for more pictures from the weekend!