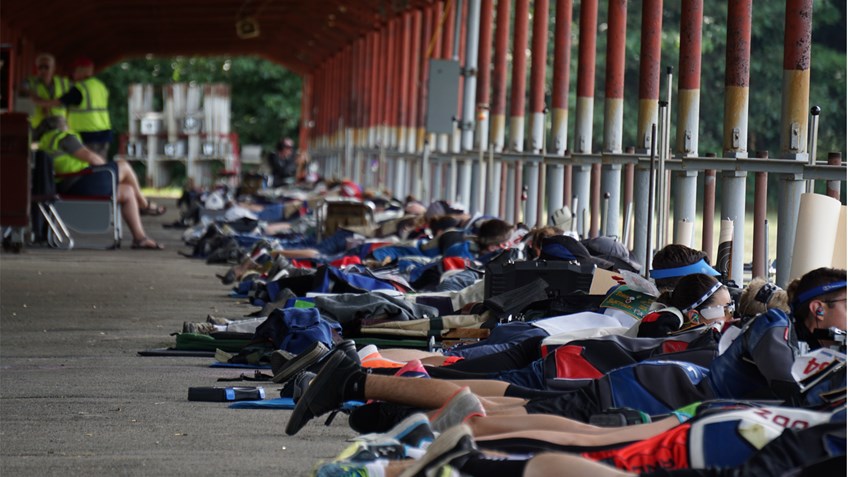 Matt Chezem is California native, introduced to high power rifle shooting by his grandfather. He learned to shoot with the same type of rifle his grandfather used in World War II, an M1 Garand. Chezem has won gold medals in the USA Shooting National Championships and National Junior Olympic Championships, and competes as a member of the University of Akron rifle team, where he is majoring in nutrition. More recently, Matt has been spending time at the Olympic Training Center, trying to earn a spot for the 2016 Rio Olympics. He competed at the NRA National Smallbore Rifle Championships in Bristol, Indiana this year, and shares his story with us...
-----------------

Every year shooters travel from around the country to Bristol, Indiana (formerly to Camp Perry, Ohio) to compete for the most prestigious title in NRA Prone… The NRA National Championships. After a year of honing the craft we put our training to the test and lie shoulder to shoulder for the title.

The course of fire is shot entirely from the prone position, and is shot at 50 Yards, 50 Meters, and 100 Yards for a total of 160 shots each day. The ten ring is about two minutes of angle and the X ring is about one minute of angle. The X ring is the “bullseye” and is used to break ties. This course of fire is shot four consecutive days in a row for a total of 640 shots and a maximum score of 6400 points. Half of the match is shot with iron sights, and the other half is shot with anysights. The shooter cannot use a rest, bipod, or any support besides a sling that tightens the rifle into the arm and shoulder.

While all years are prestigious, this year there was another title on the line at the NRA Nationals, the Robert’s Team. Every 8 years the NRA selects the top ten Iron Sight shooters to travel to England to compete head to head with the British Shooting Team in order to determine which country has the best marksman. This year was a selection for that event which will be held at the Bisley Shooting Centre in England next August. The pressure was on to perform well during the first two days of competition and the competition was fierce.

For the past year or so I have been living at the Olympic Training Center in preparation for the Olympic Trials for the Rio Games. I took an entire year off of school in order to train for a chance at making the team headed south in August. Living at the OTC allowed me to shoot every day and have the best facilities available in order to pursue my goal. After countless hours of training and preparation I shot at the Olympic Trials in April… and failed to make the team. For obvious reasons I didn’t exactly enjoy this to say the least, and needed to take some time off from any kind of shooting. Shooting had been my life for the past year and completely exhausted me both physically and emotionally and the idea of shooting a rifle was repulsive.

After taking April, May, and most of June off from the range I decided that I wanted to make the Robert’s team and should probably put some work into my shooting. Still finding my heart far away from the shooting range I didn’t exactly shoot a lot to say the least. Between the Olympic Trials and the NRA Nationals I shot about 300 rounds prone total. Needless to say that when I packed up my car to make the trek out to Indiana I wasn’t feeling super confident and I just wanted to do my best at the match and have fun. Hopefully if everything went well I would make the Robert’s team and find my love of the sport again. 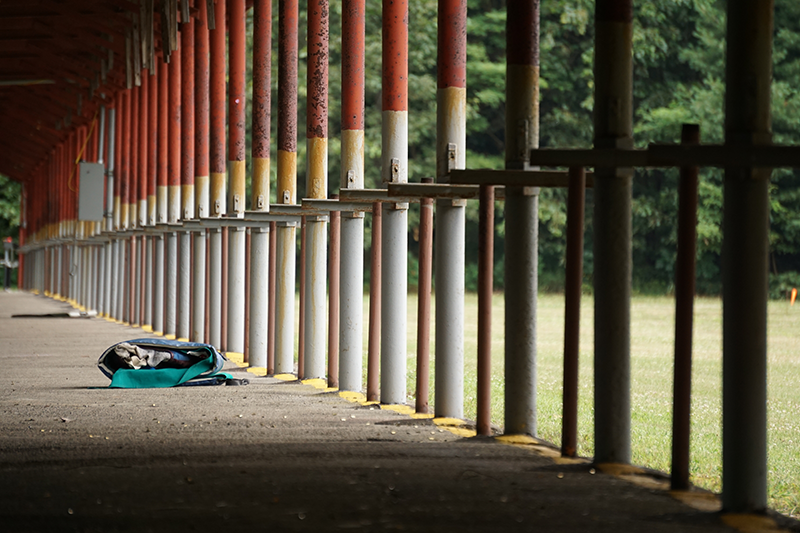 The match started on a clear Sunday morning. After bouncing my way into the parking lot on my car’s lovely squeaky suspension I made my way to the firing line and set up my firing point. There were two relays every day, and I was on relay two so I had plenty of time to relax and catch up with some of the other shooters on my relay as the first shooters finished up their targets. This pattern would continue for the rest of the nationals; one relay would shoot two targets while the other lounged about the range waiting patiently, or napping, for their turn on the firing line.

After having very little recent training under my belt, going up to the line for my first two targets of the day was different than what I was used to. I have enough experience on my side that I wasn’t freaking out, but also I wasn’t exactly exuding confidence. I hadn’t put in a ton of work and accepted that fact, so I would take what I could get. Fortunately I was able to fall back onto the thousands of rounds I’ve put down range over the years and I walked away with a 400-38X and the match win at 50 yards. This meant that only two of my shots were outside of circle that’s slightly smaller than a dime. This helped my confidence a lot going into the rest of the day, but there was still a lot of shooting to go.

The first day finished with darkening skies and still air and two perfect 1600’s on the scoreboard and I found myself sitting in second place by just a handful of X’s. While ecstatic about my performance I still had to focus on the task at hand and finish the second day strong in order to make the Robert’s Team. 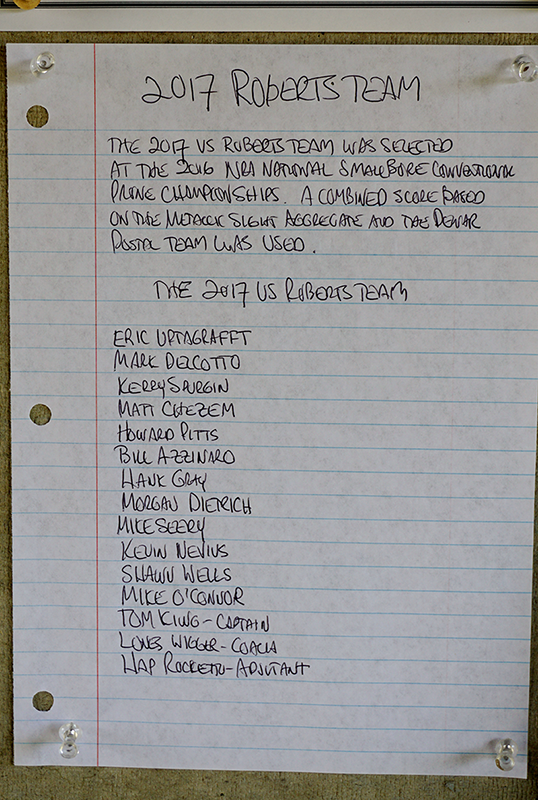 The conditions on Day two proved to be a bit harder and I found myself finishing with a 1597 for the day which put me solidly into the top ten and onto the Robert’s team. I was thrilled to make the team and get the opportunity to represent the United States next summer in England for what is one of the longest standing rivalries in international shooting.

For the next two days I put my sights into their box and put some glass onto my rifle for the anysights days of the match. I really like shooting with a scope in matches like this as it provides instant feedback to how I am shooting at any given moment; if a shooter’s position is tight they might even be able to see the bullets go through the target in a flash of gray! Shooting with a scope also allows me to make minor corrections to where I am aiming while the wind conditions change which I do constantly.

My love of scope seemed to carry me well through the rest of the competition as I finished the next two days with a nearly perfect 3199, a huge X count, and a very emotional final shot. I had just shot 319 tens or X’s in a row and I loaded my final shot knowing that I was almost done with the match, I even had the thought “Hey, you have plenty of time. Make this a good one.” I waited and watched the wind flip back and forth for a few minutes hoping that it would switch back to my condition so I could drill a center shot and finish strong. As I watched the mirage switch back to what I had been shooting in I got ready to break my final shot. I watched the wind pick up just a little bit stronger than I had been shooting in but felt entirely confident that I could aim to the side to correct for the condition and put it right in the middle. So I carefully picked the spot in the 10 ring that I thought would allow the bullet to drift right into the middle and squeezed off the shot. I watched my bullet sail about an inch farther to the left than I expected and into the nine ring by about a millimeter. I walked away from the line angry, frustrated, and upset with myself for not being more patient, at the same time, relieved that it was all over. I really didn’t want to hang around the range and wait for the results to be posted, so I asked a friend to send me a photo when the results were posted and drove off to go take some photos of the local town and cool off. A few hours later I got a text with the photo of the results: I made the podium in Third Place by a single X! 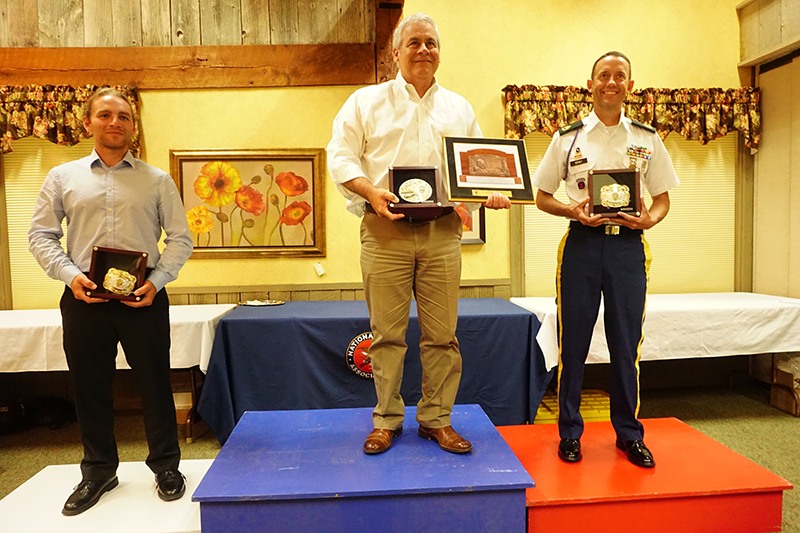