When I look back over the years, I can think of some difficult hunts of all species, from deer to turkey to pheasants to squirrels. However, the one that stands out the most was my very first elk hunt just outside of Steamboat Springs, Colorado….

It was a few years back and I couldn't have been more excited to get to Colorado for my very first elk hunt. For a fella born and raised in Montdale, Pennsylvania, this was a dream come true! Before the hunt even began, it was a success. Coming from the woods, the beautiful scenery of the Colorado mountain side made for an amazing experience. We settled into camp, gathered our bows, and we were off!

The first couple days were tough. With limited bugling and zero elk encounters, I began thinking through different plans to an elk in my bow pins. With herds of wild sheep rolling through the property, we couldn't help but feel like they were pushing the elk to higher ground. My mind was playing games with me…. I was trying to stay positive but couldn't help feeling that the odds stacked against us.

But on the third day, the game changed. A bull began bugling hard a few hours before dark. However, he was at the top of the highest peak of the lands we were hunting. With night fall only a few hours away, Stephen Phillips, Dean Reagan, and I decided to give it everything we had. We reached the top and got in position. With every call Dean made, the love sick bull inched his way to us. We could hear him come closer, and closer, until finally he reached 30 yards and I let my arrow fly. Words can’t explain how great it felt to put my hands on my first Bull elk, an awesome Colorado 6x6.It was an amazing blessing and experience I will never forget! 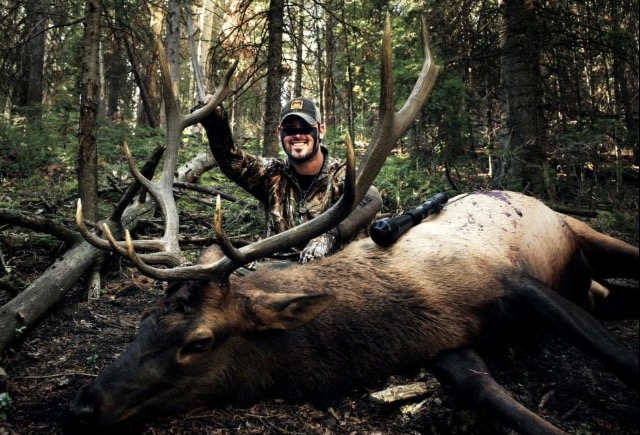 But now on to the real work. I never imagined how tough the next day was going to be packing this bull out! It was late and very cool that night so we hiked back to the camp, knowing the meat wouldn’t spoil. The following day we returned to the peak and began to quarter up the bull. Now packing up this big boy was more work than I had anticipated. It was physically draining and I was happy I had trained all summer to be in shape for this hunt. But as we were working, I began to reflect on the games my mind played on me during the hunt. You see, sometime hunts are tough physically and this hunt was also tough mentally. I had almost given up. I was exhausted and frustrated after three elk-less days. Sometimes it’s hard to remember that hunting takes patience. Try and try again and you will be rewarded.

This is a hunt I’m extremely proud of. It was rewarding to accomplish the harvesting of my first elk. It made me stronger not only physically but mentally. It reminded me that hunting can sometimes play mind games, but the reward that is found in God’s amazing creation along with a successful hunt is second to none. So be thankful for all hunts, especially the tough ones.
IN THIS ARTICLE
Hunting Nate Hosie
More
SUBSCRIBE