How to Read Bianchi Cup Scores 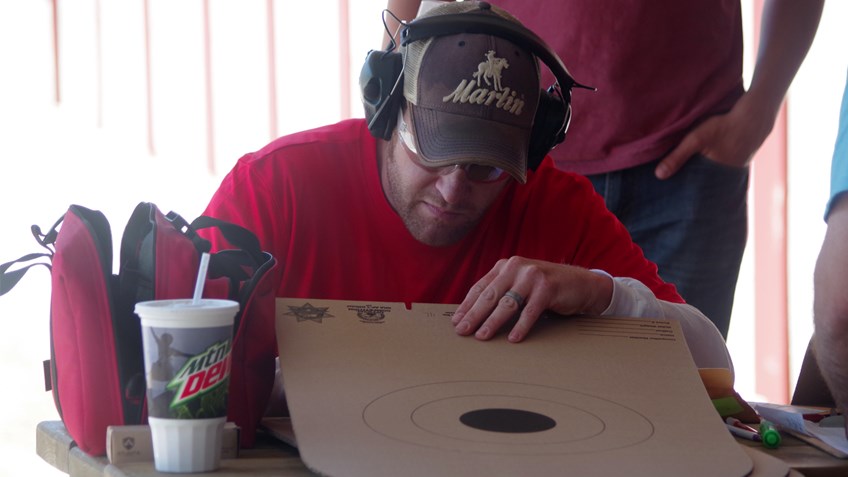 If you’re new to the world of competitive shooting you may find it a little intimidating…like I do.

Luckily for me, I get to work in a place where there is a plethora of people who know tons about this world and are always ready and willing to answer my questions and tell me more about it!

Lucky for you, I believe sharing is caring, so I take the knowledge I have gained and gladly share it with you.

The 2016 Bianchi Cup Championship took place in Columbia, Missouri over a 5-day period. Hundreds of competitive shooters came together to prove that they have what it takes to be THE Bianchi Cup Champion. Unfortunately, only ONE person actually gets to claim that title, and that one person happens to be 17-time champion, Doug Koenig.

It’s pretty clear that our tips on How to Beat Doug Koenig did not work.

As a blogger, it is my duty to provide readers with the latest and greatest news in a timely fashion, so during the 2016 Bianchi Cup, I was tasked with providing an update on the current standings for competitors. Ok, easy enough, or so I thought…

I received a PDF with all the latest overall scores.  Looked something like this:

At first glance, it looks like Enoch Smith is in first place, and Doug Koenig is in second…oh my gosh, could Doug possibly lose the reigning title as champion???

At the time these scores were released, maybe, but unlikely. Why? Enoch’s score was based on all four events. Doug (and the others) were based on only three events.

It is the aggregate score of all events that determines placing.

Speaking of Doug, let’s use him as an example to further explore how scoring works…

In Bianchi Cup, there are four events (or stages): Practical Event I, Barricade Event II, Mover Event III, Plates Event IV. Each one of these events is scored by total points – total number of X’s.

The total number of points is calculated by adding up all your shots on the target. Here’s what an official Bianchi Cup AP-1 target looks like. These targets are used in only 3 of the 4 events. The Plates event uses steel falling plates. 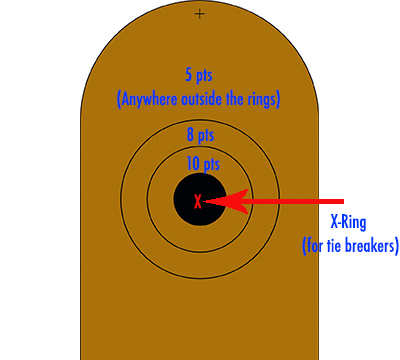 Each competitor is allowed 48 shots per event.

Every bullseye, or X-ring, hit goes towards your X points, and is considered a perfect shot.

All shots in the first outer ring from the bullseye is 10 points. (see diagram above)

All shots in the second outer ring from the bullseye is 8 points.  (see diagram above)

All shots outside the rings is 5 points. (see diagram above)

Looking back at Doug’s scores…

Plates Event IV: 480 – 48 means he earned 480 points and hit the x-ring (bullseye) 48 out of 48 shots. That means Doug shot a PERFECT score. That’s right, PERFECT. SCORE. *
* Note: The plates event is unlike the other events, the targets in this event falling steel plates. However, the scoring for this is still the same *

Is there any question as to why he’s a 17-time champion?

After each event is completed and scored, the scores are aggregated to a final score:

At the end of the day, it is the aggregate score that determines where you stand.

There you have it. You are now a Bianchi Cup score reading pro, at least we hope so.

Have questions? Leave them in the comments below!