Meet Alan Kay at the NRAStore Booth at Annual Meeting 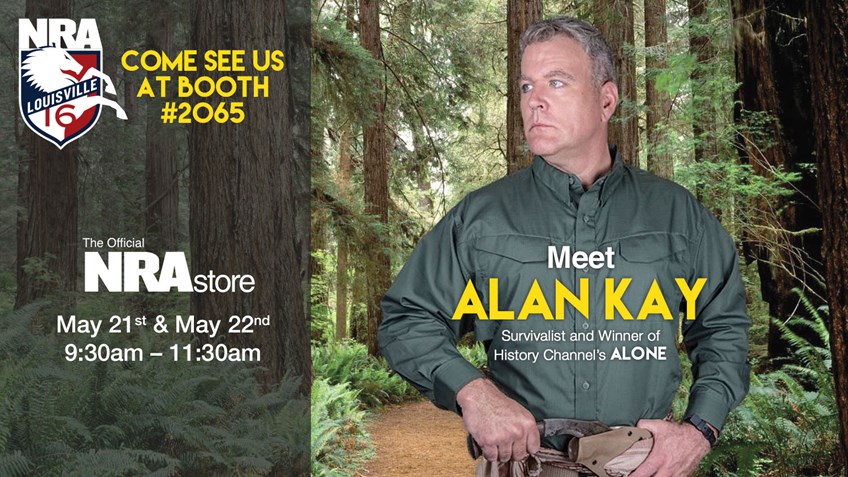 More
SUBSCRIBE
Will you be joining us for the 145th NRA Annual Meetings & Exhibits in Louisville? Chock full of firearm-industry exhibitors, concerts, speakers and other activities, it’s the can’t-miss event of the year!

The Official NRAstore, booth #2065, will be front and center on the main show floor of the Kentucky Exposition Center. It’s your official onsite source for Annual Meetings souvenirs, truckloads of NRA branded gear and more! What’s “more”, you ask? We’ve teamed with renowned tactical apparel manufacturer TRU-SPEC® to bring in Alan Kay, survivalist and winner of History Channel’s “Alone”. Kay will be available for a meet and greet in the NRAstore booth Saturday, May 21 and Sunday, May 22 from 9:30am – 11:30am.

Kay, who starred in and won the inaugural season of the survival show, serves as a corrections officer and survival expert. Kay spent most of his childhood in the forests of Georgia, building forts and honing his skills. After some time, his knowledge became so vast that he could successfully survive in virtually any environment. In an effort to increase his understanding of edible and medicinal plants, Kay sought out and studied under several different educators. He also spent time developing proficiency in the combative arts, including barehanded, stick and knife fighting. In his role as a corrections officer, Kay has been trained in tactical medical care.

Don’t miss your chance to meet, chat and get your picture taken with a true survivalist and Second Amendment supporter! See you in Louisville!
IN THIS ARTICLE
NRAStore NRAAM NRA Annual Meetings & Exhibits
More
SUBSCRIBE