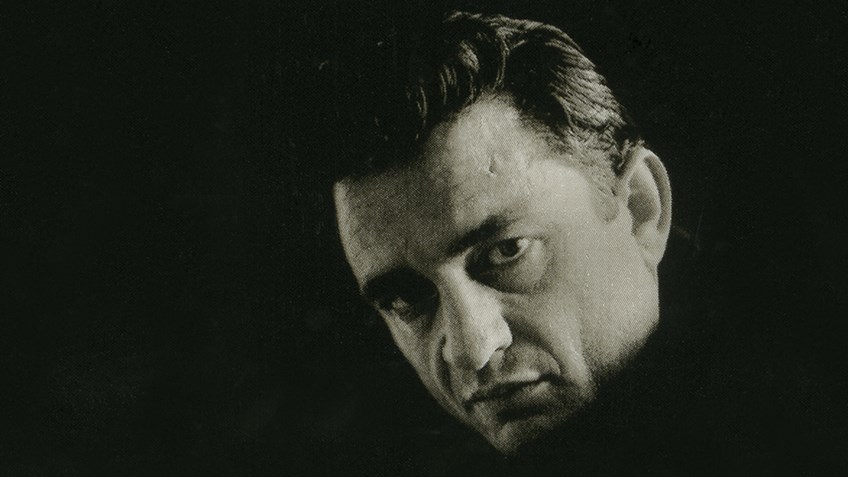 More
SUBSCRIBE
Music icon Johnny Cash is widely considered one of the most influential musicians of the 20th century. When he was away from the limelight, Cash enjoyed spending time with friends and family. Gene Ferguson met Johnny Cash while working as a national promotions manager with Columbia Records, and from there a friendship was formed. Ferguson and Cash shared a love of firearms among many other things. We learn more about the special bond these two men shared from Gene and his son Todd Ferguson and the Colt 1860 revolver Cash gifted Gene years ago.

How did you and Johnny Cash meet?


Gene: I started with CBS-Now Sony in 1956, Cash came to Columbia records (a division of CBS) in 1957. His first record released was “Don’t Take Your Guns to Town.” We met later that year and our friendship began.

What was it like growing up with a father who knew folks like Johnny Cash? Did you know who they were at the time?
Todd: At a very young age they were just friends of the family. It was when I got older that I finally realized he was a very famous person, but I still just saw John as a very close friend to our family. Dad and John were very close, like brothers. 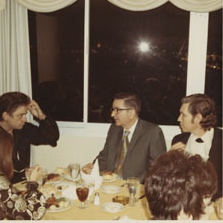 Photo: Johnny Cash (far left)
and Gene Ferguson (far right)
What was your friendship with Johnny like?
Gene: For thirty five years we were very close. John lived at my house in Brentwood, TN when he came to Nashville to record. I also spent time with John in town.

What do you remember about your father’s friendship with Johnny?
Todd: My dad knew a lot of ranchers in south Texas from over the years of hunting. One day, John told dad that he wanted to take John Jr. hunting so John, John Jr., my dad and myself along with my brother went to Texas where we hunted on several different occasions. One time we took one of John’s tour buses and another on John’s plane. Dad and John were practical jokers and one day they decided to get some pictures of John “tied” to a post surrounded by wild hogs. Not sure what the reason was behind that, but I’m sure they had something up their sleeve.

What do you appreciate the most about your friendship with Johnny?
Gene: I was proud of the fact that John considered me part of his family and told me so on several occasions. 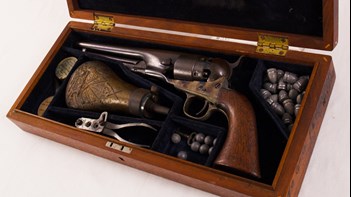 Photo: Gene's 1860 Colt Army Revolver from
Johnny Cash Is there a special memory you have about Johnny?
Todd: There was a trip I remember John cooking us his homemade chili dinner. I had gone to the store with him to get the items needed for dinner and I remember seeing people trying to be discreet, peeking around the end of the aisles to get a glimpse of John. One lady finally did come up and asked for his autograph and I remember her saying, “I hate to ask” and John responding, “Ma’am if it wasn’t for people like you, I wouldn’t be who I am today." Another trip John asked me to go with him to town so he could buy June an anniversary present. I really can’t remember what he bought for her though.

Anything else you wish to share about your dad and Johnny?
Todd: I do remember John showing up to our house one Christmas morning with presents. John had given my Dad one of the first RCA Camcorders and we all thought that was the greatest thing since we were so used to looking at slides and 8mm film. 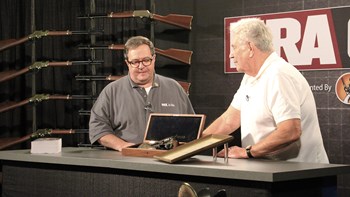 Photo: Phil Schreier (left) appraising the Colt
1860 Army Revolver with Gene Ferguson (right)
on the set of NRA Gun Gurus.
Why did Johnny gift the 1860 Colt to you?
Gene: The 1860 Colt John gave me in Las Vega was a present, no particular reason. John had a large interest in early American Guns and he knew my feelings were the same. We went to many gun stores together.

What was it like to see your father sharing this unique firearm on camera for NRA Gun Gurus?
Todd: It was a great day! Not only seeing my dad sharing his stories about John and the 1860 to Phil Schreier, but my son was there as well to enjoy and share the moment with his PaPa. For that I would you like to thank all of you with NRA Gun Gurus for making many more great memories for my family.

Be sure to catch Gene with Phil Schreier on NRA Gun Gurus TONIGHT at 7pm ET on Outdoor Channel!