NRA Museums Receives A Rifle Fit For A Viking 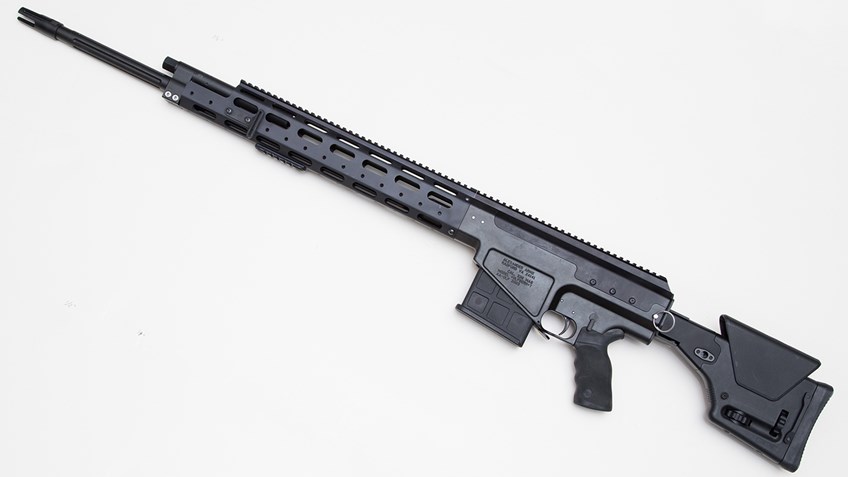 More
SUBSCRIBE
The NRA National Firearms Museum’s newest donation may have a 1,000 year-old name, but it couldn’t be more modern. The Alexander Arms Ulfberht, named after a masterfully crafted medieval Viking sword, is an innovative semi-automatic chambered for the powerful .338 Lapua Magnum cartridge.

Simple in design and weighing only 19.8 pounds, the Ulfberht is as light as it is strong. And 19.8 pounds is pretty light when you’re talking about a gun whose 27-inch barrel can accurately put the .338 Lapua Mag. on target up to 2,000 yards downrange.

The Ulfberht is just the latest design by Alexander Arms, which is known throughout the shooting industry for unique firearms like the .50 Beowulf, 6.5 Grendel, and AR-15 .17 HMR. Featuring recoil low enough to allow you to watch your shots impact and a build quality that ensures reliable performance even at extreme temperatures, the Ulfberht’s balance of design, function, and usability has created the ultimate platform for long range shooters.

While only arriving at the museum two weeks ago, the Ulfberht had actually been at the NRA for quite some time. American Rifleman scored the rifle for a review and were told by Bill Alexander of Alexander Arms to deliver it straight to the NRA Museums collection when they were done. The rifle may not have as much history as other pieces that come through the museum doors, but its craftsmanship is worthy of admiration and we’re excited to see how the gun will make a name for itself in the years to come.
IN THIS ARTICLE
Donation
More
SUBSCRIBE

RELATED
Kimber Partners with NRA-ILA in Donation Match Campaign
Firearms For Freedom
Fundraising
#GivingTuesday Donations To The NRA Foundation Raise More Than $31,000!
Fundraising
‘Tis The Season To Give Thanks And Teach Freedom
Top Stories