A Pennsylvania Rifle With 200 Years of Family History 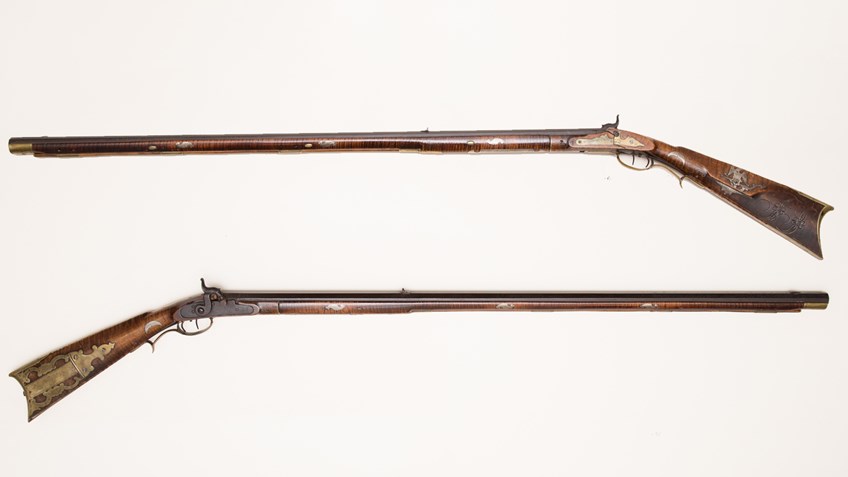 More
SUBSCRIBE
The long rifle, also known as the Kentucky Rifle or Pennsylvania Rifle, was one of the first rifles to see widespread use, and production, in colonial America. Before its adoption, settlers commonly used European-made smooth bore muskets whose short barrels had a very limited effective range.

It wasn’t until German immigrants arrived in the early 18th Century that their knowledge of rifled barrels led to the creation of the wildly popular long rifle. The gun's long barrel meant frontiersmen could enjoy greater accuracy over its smooth bore counterpart and a reduced caliber lightened a hunter's load thanks to lighter ammunition. More accurate and less cumbersome to travel with? It's no wonder the long rifle quickly spread far and wide through the colonies.

No two long rifles were alike either, even when made by the same gunsmith. Ornately decorated with inlays, a long rifle’s appearance reflected its maker’s personality and regional influences. One of the most obvious differences between long rifles was its namesake – the length. While longer than the German hunting rifles they were based on, a long rifle had no set barrel length. In fact, most gunsmiths determined the rifle’s length by the height of their customer’s chin.

The Albright family were well known gunsmiths in central Pennsylvania in the 1700s and created a number of ornate long rifles. One of their clients shortly after the United States won its independence from England was Michael Ruble, the son of a Pennsylvania Militiaman who fought in the American Revolution. Ruble held on to his rifle, which passed to his son, who passed it to his son, as it moved from generation to generation as a treasured family heirloom.

Which brings us to today, when Michael Ruble’s Great Great Great Great Granddaughter donated her family’s long rifle to the NRA National Firearms Museum to be appreciated by every visitor who walks through its doors.

And you'll be able to see it, just as soon as our curators catalog it, clean it, and find some space among the 3,000 other firearms on display.
IN THIS ARTICLE
NRA Museums Donation
More
SUBSCRIBE