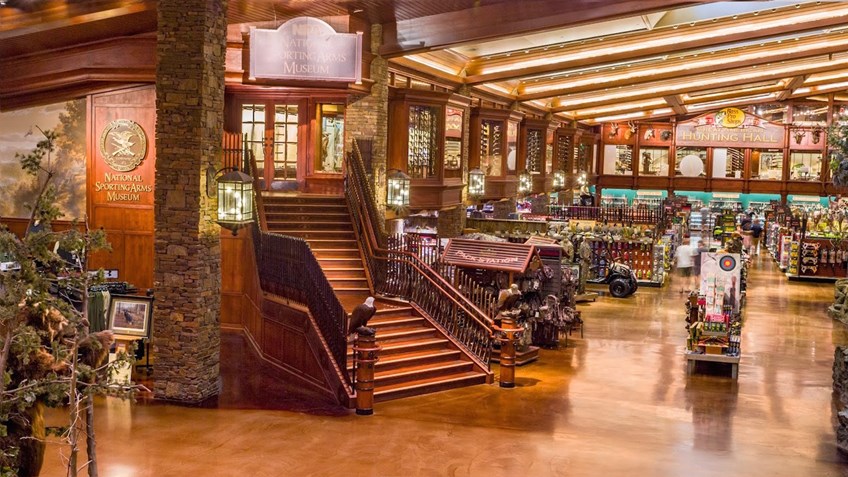 The NRA National Sporting Arms Museum at Bass Pro Shops in Springfield, Missouri, celebrated an incredible milestone Dec. 28, 2016, welcoming the 1 millionth visitor to the museum since opening its doors in 2013.

Tray Carter, joined by his wife Tracie and their sons Preston and Sam, from West Memphis, Arkansas became visitor number 1 million during a visit to the museum at 2:30 p.m., on the late-December Wednesday. To commemorate the historic feat, the museum presented the Carters with limited-edition coins minted for the occasion, a leather-bound edition of “Treasures of the NRA National Firearms Museum” signed by author and NRA Museums Director Jim Supica and the co-authors, a Bass Pro Shops gift certificate, and other keepsakes.

After the gift presentation, NRA National Sporting Arms Museum Manager Stoney Roberts provided a 2.5-hour guided tour of the museum, followed by a behind-the-scenes tour of the “Granddaddy of all Bass Pro Shops” with Pete Duchrow, the store’s Manager of Operations. 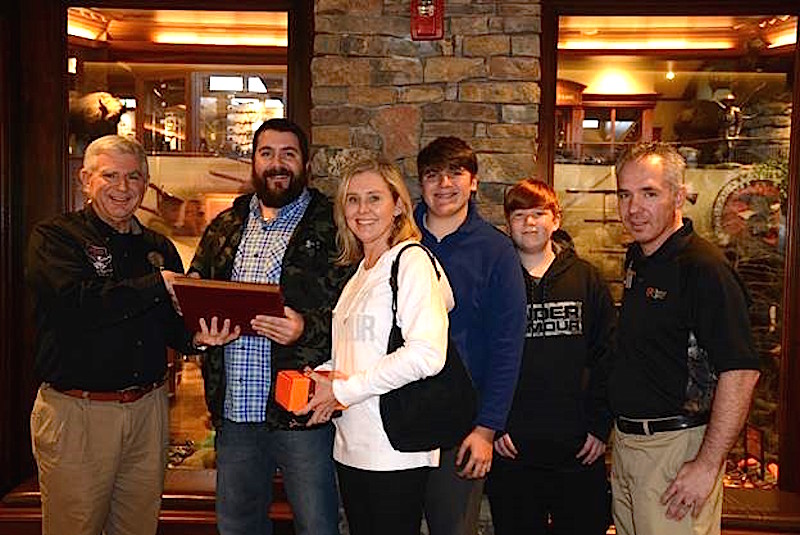 The Carter family said the event and the attention they received “made them feel honored and special,” calling the experience “something they’d never forget.”

Roberts said the museum welcomes approximately 274,000 visitors annually, or about 25,000 each month with surges in traffic during the holiday season.

“Visitors come from all corners of America and from all over the world,” Roberts said. “We have a local travel agency that arranges museum tours for visitors from mainland China, and we regularly see guest book entries from France, the United Kingdom, Australia, Austria and most other countries where people are free to travel. “ 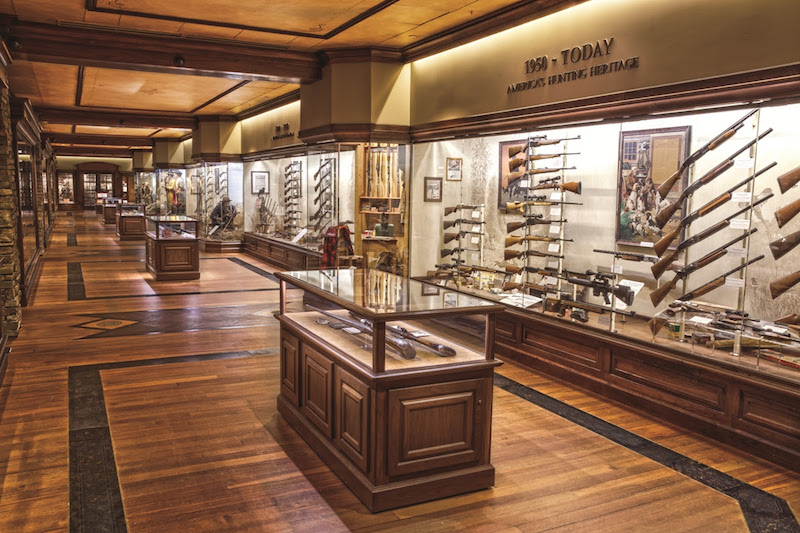 Supica added that the NRA National Sporting Arms Museum at Bass Pro Shops is the most visited firearms museum in the U.S.

“We believe that it is a place where more people go and have a live positive educational experience with firearms on an annual basis than any other venue or event,” Supica said. “Thanks to the generosity of Johnny Morris and Bass Pro Shops, it is the most impressively designed and finished firearms museum I've ever seen.”

The NRA National Sporting Arms Museum at Bass Pro Shops boasts a collection of nearly 1,000 firearms on display, plus 185 muzzleloading rifles that line the magnificent stairway entrance. The museum also houses numerous examples of original art dating back to the late 19th century and early 20th century, as well as artifacts and other relics that contribute to the firearm displays to better tell the story of firearms in America.

Exhibits include a “Timeline of American Sporting Arms” from the earliest European explorers through the present day, guns and art from the Remington factory collection, the Theodore Roosevelt Conservation Gallery featuring guns owned by Roosevelt and his friends and family, and an exhibit of Hollywood Guns, Supica explained. The collection includes guns owned and used by Olympic champions, Medal of Honor recipients, Presidents and royalty, and Old West lawmen and outlaws. These are displayed side-by-side with the most popular and interesting sporting arms used by generations of American hunters. 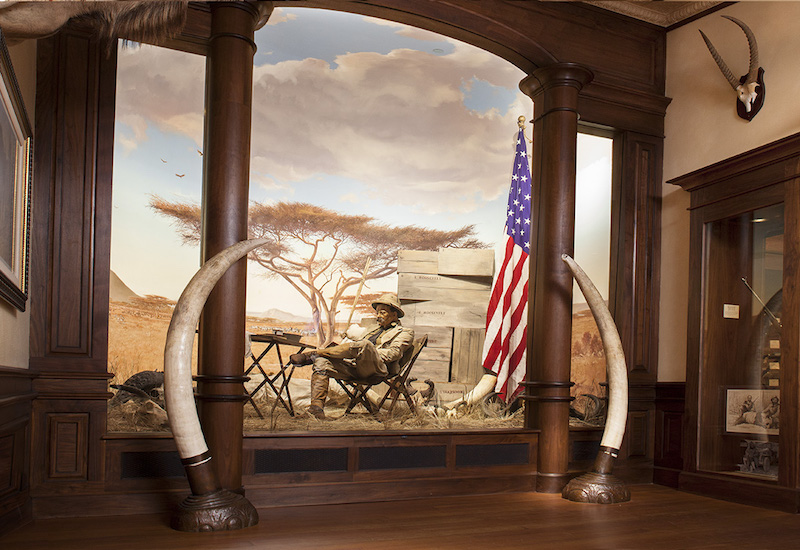 Of the myriad exhibits in the museum, Roberts said the guns of the “Lawmen and Outlaws” exhibit and the “Lewis and Clark” exhibits are among the most popular, attracting school groups for tours and lectures. Roberts said the museum’s themes of conservation, hunting and freedom are built in a manner that signifies their importance in the story of America.

Helping guests navigate and fully appreciate the wealth of historical significance of the museum’s treasured collection, the NRA National Sporting Arms Museum at Bass Pro Shops employs docents as opposed to using electronic guides. Upon hiring, the docents are enrolled in a continuing educational process, studying the history related to the displays in order to weave a compelling historic narrative to complement the displays themselves.

“The positive exposure to our American heritage that [visitors] receive when visiting the NRA National Sporting Arms Museum at Bass Pro Shops adds to their knowledge of what led to the American ideals we enjoy today,” Roberts said. 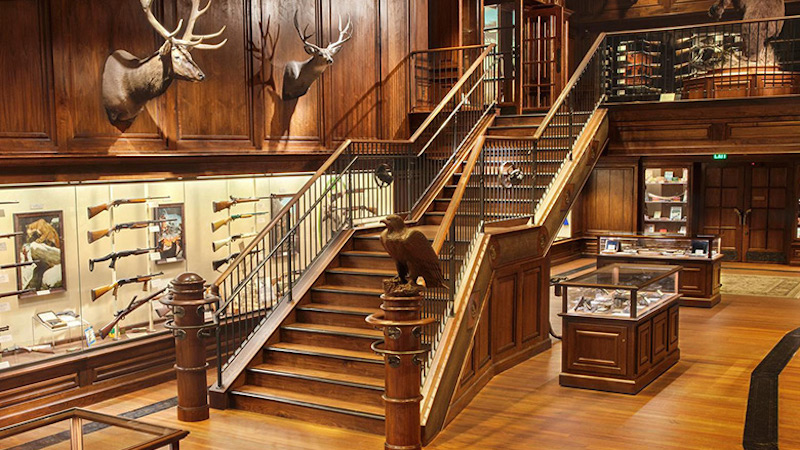 The NRA National Sporting Arms Museum at Bass Pro Shops is open daily year-round from 10 a.m. to 7 p.m., with Christmas Day the only closure of the year. The museum is handicap accessible. Tours are available for scheduling by calling the museum at (471) 891-5346.

For more information about the museum, visit http://www.nramuseum.org/museums/national-sporting-arms-museum.aspx.