ARs for Deer Hunting: The Modern Answer to an Age Old Tradition 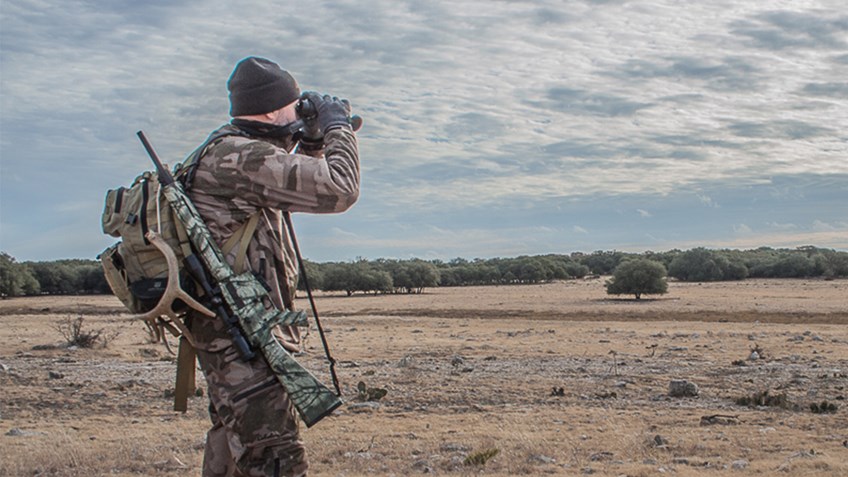 This article was originally published on OutdoorHub and as been repurposed with permission.

There’s no question – the AR-15 doesn’t look like your daddy’s deer rifle. Of course, the Winchester Model 94 lever-action rifle your granddad used doesn’t look anything like his father’s Hawken, either.

However, we see progress all around us. The smartphone is nothing like the rotary phones I grew up with, and if my grandpa stepped in my pickup truck, he’d think it was a spaceship.

The American hunter is experiencing this same thrust into the 21st century. While it might not have the lure, feel and warmth of walnut and blued steel, performance matters over nostalgia. I’m not suggesting you trade in your old .30-30 on an AR, or regulate your bolt rifle to the closet for all eternity. What I hope you will do is consider the many factors that make the AR-15, and its bigger brother the AR-10, ideal for deer hunting.

We’re living in a brave new world and the AR is the hunting rifle of the new millennium – and here’s why: 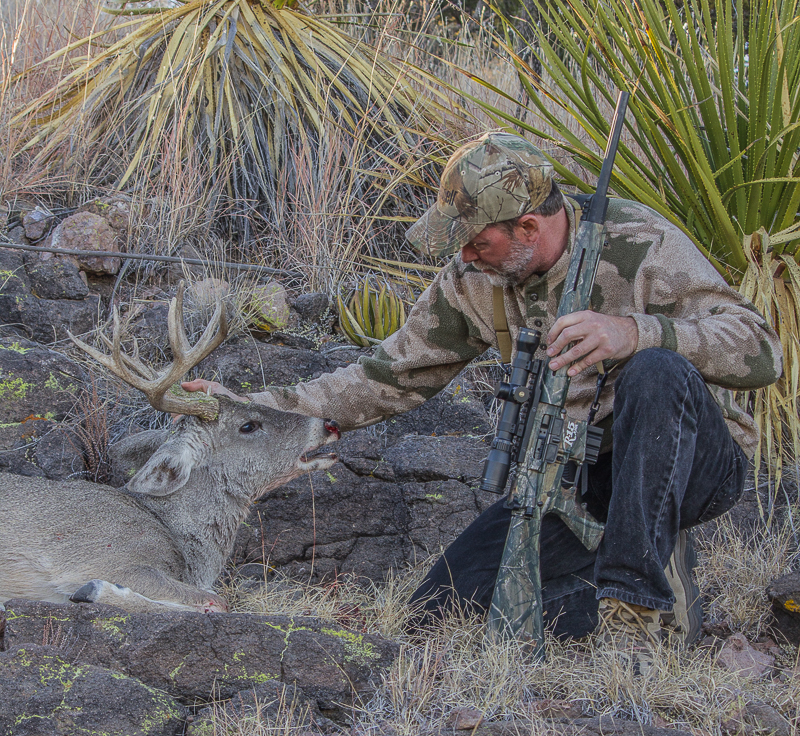 The author loves pursuing whitetails with an AR.

Anyone serious about shooting a rifle realizes that the interface between the rifle and the shooter is paramount. A rifle needs to fit you if you want to shoot it well. Many years ago, when my son was way shorter than me, I was struggling to find a deer rifle compact enough for him. I noticed my AR leaning in the corner and then an idea hit me: with its adjustable stock, the AR would be ideal for him (photo below).

The adjustable stock common on many ARs isn’t the only thing that makes an AR ideal for a small-statured shooter. Many modern ARs weigh in at right about 6 pounds. Those hunters with limited arm strength will find them lighter than many bolt-action alternatives. Additionally, with the interchangeability option of an endless variety of handguards and accessories, an AR can be tailored to perfectly fit any shooter and any shooting situation. 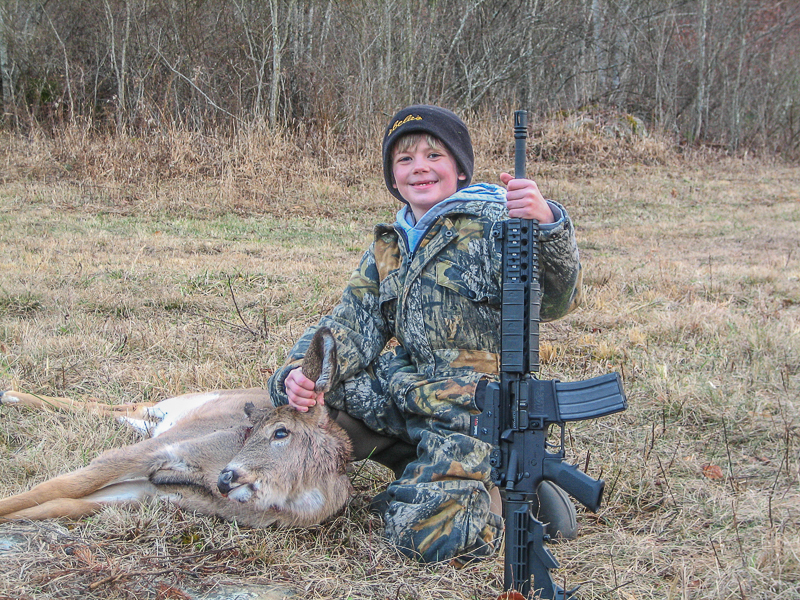 When I was a young deer hunter, there was an intense distrust in semi-automatic big-game rifles. Not all that long ago, the AR’s reputation for reliability was not all that stellar. Well, things have changed. Modern ARs might be more reliable than many manually operated rifles. Competition in the marketplace and modern manufacturing capabilities have made the AR almost as dependable as the sunrise.

Semi-automatic fire can be of some help to the deer hunter, too. As much as we all like to think we never miss, that’s not the case. Follow-up shots after a miss or even a poor hit can be the deciding factor in whether a hunt is a success or failure.

Over the last 10 years, I’ve tested enough ARs from enough different manufacturers to arm a small country’s army. I went back, looked at all the shooting data from these tests, and I was rather astonished to discover the average accuracy delivered by all of these rifles was 1.5 inches for five, five-shot groups at 100 yards.

This is plenty of precision for deer hunting, and way better than most shooters can perform from field positions. In my experience, if an AR has an accuracy problem, it’s often the fault of the trigger. Fortunately, the installation of an excellent replacement trigger, such as the one from Timney, is easy.

There does exist more powerful options for those who demand it. Nine of the 41 states permitting centerfire rifles for deer hunting prohibit the use of the .223 Remington. If you hunt in one of those states, the 6.8 SPC or .300 Blackout are an option, as is the new .25-45 Sharps, which duplicates the performance of the old .250 Savage. If you want to stretch your range or just think you need more power, you can step up to an AR-10 and choose a cartridge like the .243 Winchester, 6.5 Creedmoor, .308 Winchester, and in some cases even magnum cartridges.

Another factor that makes the AR ideal for deer hunters is the same factor that has been influencing hunters since the early 1900s. When veterans return home from war, they do so with a deep trust for the weapons that kept them alive in battle. That’s why the bolt action eclipsed the popularity of the lever action after WWI, and it’s why rifles like the Browning BAR and Remington 742 became so popular after WWII.

Today’s veterans have learned to trust the AR platform because it kept them alive in places like Vietnam and the Middle East. Not only that, but they are intimately familiar with its operation and maintenance, which allows them to be more effective and safer at home, on the range, and in the field. 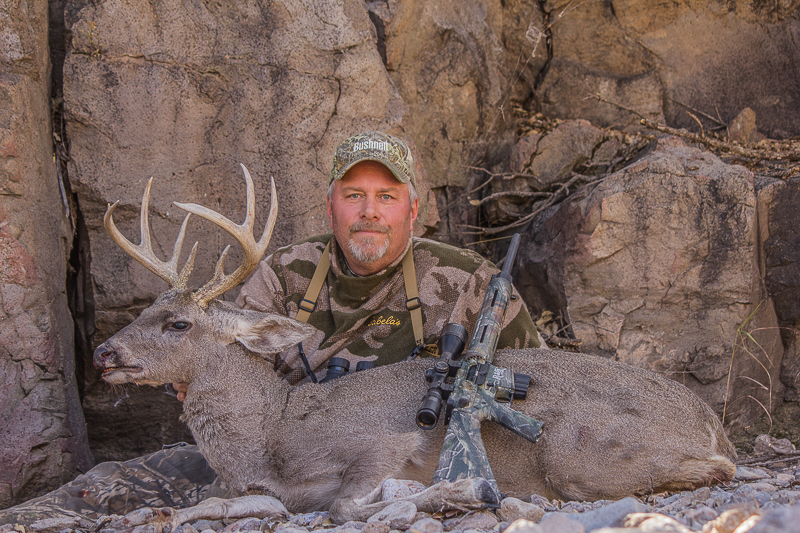 Hunters of all ages and backgrounds have discovered the many benefits of deer hunting with an AR.

Finally, you can’t discuss the AR without recognizing its versatility. Though many consider the AR and the accessories for it only tactical tools, you can assemble an AR to complete any hunting adventure. The modularity of the system allows you to configure an AR for deer hunting, and with quick-attach accessories and components, you can easily convert it to a predator rifle or set it up for home defense. This includes the ability to switch between different cartridges in a matter of seconds.

It seems like the entire firearms industry has jumped onboard with AR accessories, and you can find more accessories for an AR than for any other firearm. Maybe just as important, is the fact that you can build your own AR at home. There is no other rifle where something that fulfilling can be accomplished so simply.

Many people don’t realize AR stands for Armalite Rifle, the company that introduced the AR-10 and AR-15 in the mid-1950s. Much of the mainstream media and the anti-gun crowd mistakenly assume AR stands for “assault rifle,” a convenient acronym for promoting an anti-gun agenda.

It’s time to eliminate the misconception that AR stands for assault rifle, and tell the world what AR really stands for: America’s Rifle. After all, it is the most popular rifle in this country, and as more and more hunters become exposed to all it has to offer, it just might one day be the most popular deer rifle in America, too.