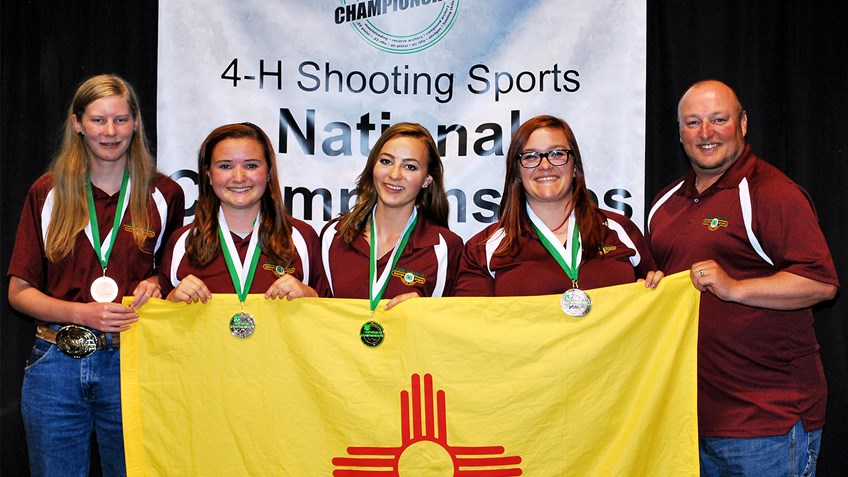 More
SUBSCRIBE
Kimberly Hull, Rashel Kort, Jeana Dola, and Michaela Langlit are the four ladies who made up this year's New Mexico Air Rifle Team. Their motto? “Shoot like a girl... if you can.” Which is fitting since these ladies were named champions at the National 4H Shooting Competitions in Grand Island, Neb. over the summer!

The team from San Juan County was the first to win a national air rifle title for New Mexico. They competed for three days against 21 other teams from all across the country. The course of fire included 10-meter, 3x20 three position (off-hand, kneeling and prone), a separate 10-meter 40 round off-hand event, and a 40-target off-hand silhouette course at distances ranging from 20 to 45 yards.

In the end, the ladies earned a total of 15 individual and team medals. As a team, they earned sixth in 3-P, third in standing, and first in silhouette. Kimberly won overall High Point Individual, and Michaela placed second, Rashel came in 14th, and Jeana was 34th.

The Suan Juan County Friends of NRA have been big supporters of the team providing four grants to San Juan County 4-H which totaled $7,350. The grants included products for .22 rifles, air rifles, and shotguns as well as a grant for firearm safety and basics of rifle shooting, including 3 position air rifle, small bore and small bore silhouette.

These ladies' dedication and commitment from the county level, to the state level, and on to the national level has been nothing short of admirable. Their goal was not to win, but to simply beat their best individual scores. Well, those scores certainly spoke for themselves!