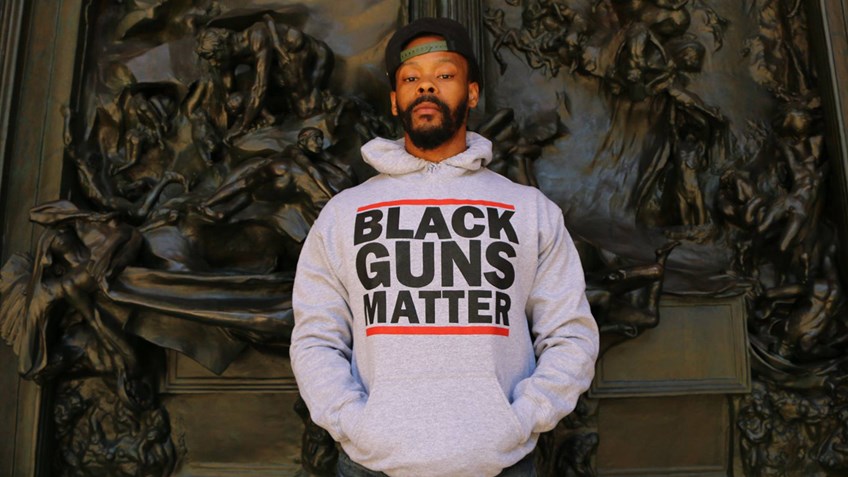 More
SUBSCRIBE
Black Guns Matter, it sounds interesting especially with everything happening in today’s gun culture but don’t be fooled, it is a great cause led by a far greater person.

Maj Toure, founder of Black Guns Matter, is a leader of his time. He travels across the United States with one mission, a mission to make a positive impact, and educate urban communities on Second Amendment rights and responsibilities.

The concept of Black Guns Matter came to life when Toure was traveling the country and noticed how oblivious people were and misconceptions they’ve brewed in urban communities – “All around the country, urban areas are misled, misinformed, or straight up ignorant on the information about firearms safety and knowledge of Second Amendment rights.”

This ultimately inspired him to create something, to provide a solution, to be a Solutionary.

You’d think a man of Toure’s caliber – out to change the world – his life would be filled with glamour, but he’s just like the rest of us. He wakes up, hits the gym and spends the rest of his day constantly learning new things and figuring out ways to help people. (Ok, I’ll admit, he’s not quite like the rest of us, he’s definitely more motivated.)

“Your mind, your body, and your spirit has to be on point. That’s the essence of what my entire day is.”

You’ll often see him refer to the term “Solutionary” – a term derived from the root word, solution. Similar to the derivation of “revolutionaries”, whose root word is “revolve”, but difference in such that a Solutionary does not continually revolve around one thing – they see where a particular issue is being attacked, identify that problem, and create a solution for it.

He is the ultimate Solutionary, and is committed to living the Solutionary lifestyle: helping, healthing and wealthing.

“You’re helping people, you’re being healthy, and you’re getting your money right.”


The Challenges, The Rewards

Challenges have a tendency of shattering our everyday routine, but that shouldn’t stop us from pressing forward.

Toure has seen plenty of his own challenges, as well as successes. Growing up in Philly, he has experienced first-hand tough neighborhoods, and carrying a gun around with no idea how to use it.

“I was 15, walking around with a gun I had no idea how to use and no real respect for,” Toure said in an interview with Bearing Arms, “In hindsight, I wish there [was] someone to say hey, this is a firearm, it’s not a game.”

He has lived the life of misunderstanding, the life that he continually seeks to change.

When he brings Black Guns Matter into urban communities, they receive a welcoming reception. His narrative is not to be bigger or better, but simply to educate and inform. And when the community understands this, they embrace it, they appreciate the truth and the facts.

“When I go into any urban area to promote Black Guns Matter, we get amazing reception because the people see that they have been duped, tricked, misinformed, hookwinked – and nobody wants to be hoodwinked.”

However, sometimes it’s not always the same warm reception. “Getting people to open themselves up, that’s the biggest challenge,” says Toure. Trying to overcome the stereotype, and getting people to understand that a firearm is not something to fear, but something, with a little education and training can truly be a critical resource.

“You wouldn’t run away from a construction worker or union member because they had a hammer, screw driver and box cutter on their tool belt, well [a firearm] is just another tool, and it needs to be handled with respect.”

And just like every other challenge, comes those moments of success. Toure’s measurement of success comes when someone whose ignorance takes a turn, and they start to understand a firearm is a tool that deserves the same respect as they do.

“When we get somebody to be open-minded and objective to understand that they have these rights – the right to defend myself, the right to participate in the shooting sports, the right to hunt, and these rights are mine and shall not be infringed – that is the biggest success I have seen.”

Wait, what? Why would someone who put so much time and energy into a movement that has taken the country by storm want it to disappear?

Well, as Toure puts it, “There shouldn’t really be a need for this information to be spread in the hood. The goal is to inform as much of the urban population as possible so this conversation does not have to happen again.”

Making their way across major cities in the United States, Toure hopes to be able to reach every young person with his message – a firearm is a tool for their protection and for the shooting sports. He hopes to provide enough information and inform enough of the urban demographic that together, we, can make this obsolete, and this is no longer a topic of conversation.