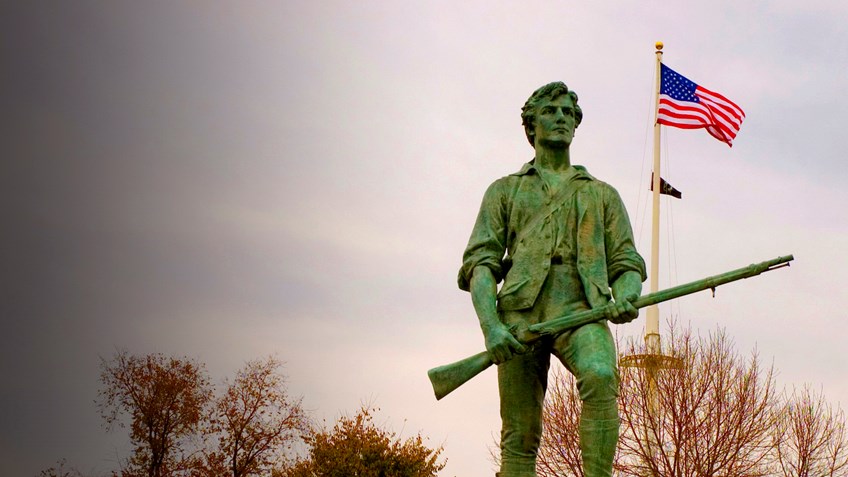 In the continued war on American gun rights by political opponents and anti-gun zealots, the rhetoric has taken on a faux-academic approach, as some politicians and pundits have fashioned themselves as Constitutional scholars. These self-made history experts claim to know precisely the intent of the founding fathers when drafting the document, particularly its embattled Second Amendment.

The central argument laid out by anti-gunners calls into question the intentions of America’s revered founding fathers, whose gallantry, vision and wisdom produced the inalienable law of our land. The language of the Second Amendment reads:

“A well regulated Militia, being necessary to the security of a free State, the right of the people to keep and bear Arms, shall not be infringed.”

Critics of the Second Amendment and revisionist historians claim James Madison and his contemporaries used the term “arms” in reference – solely – to muskets, the long muzzleloaders that conjure nostalgia of Minutemen in ranks, tediously loading and offering single-shot volleys in concert. While the majority of firearms used by soldiers and citizens alike were ripe with said muskets, they hardly represented the monopoly on guns in America – and our forefathers knew it.

Historical evidence suggests that “assault weapons” – firearms that can hold larger capacities of ammunition and operate at faster rates of fire (at least that’s one of the myriad definitions as to what constitutes an assault weapon, in and of itself a term purely of arbitrary political manufacture) – have existed in the United States and its preceding colonies well before the drafters of the Constitution even bore the thought to bring quill to parchment. 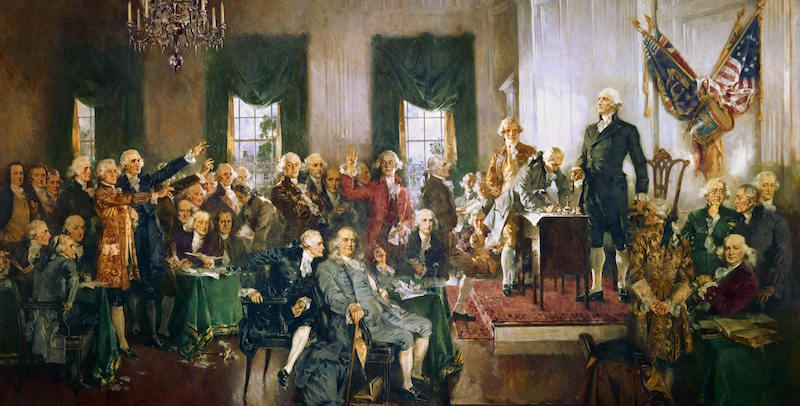 Moreso, even as some firearm designs were developed with a military purpose in mind, the gunsmiths and inventors created these innovative arms for the private citizen, improving on existing concepts to help owners shoot more easily.

Some early firearms boasted mechanics designed to provide multiple shots without reloading, primarily through the addition of multiple barrels or locks, according to Jim Supica, Director of NRA Museums. While primitive, the first of these repeating arms were seen in development as early as the 14th century, some 400 years before the creation of the Bill of Rights.

“In the 17th, 18th and 19th centuries, double-barreled, muzzle-loading firearms provided a second shot available before reloading,” Supica explained. This feature was prominent in shotguns and pistols, only less so in rifles due to the “cumbersome” extra weight it added to the firearm.

However, Supica explained that while most rifle barrels were usually fixed, some swivel barrels allowed multiple barrels to be sequentially fired with a single lock mechanism, a massive developmental and mechanical improvement over the simple muskets that armed Revolutionary War militiamen.

Supica points to a variety of examples of firearms that predate 1791’s Second Amendment as evidence to counter claims that our founding fathers immortalized our right to keep and bear arms mutually exclusive to muskets: 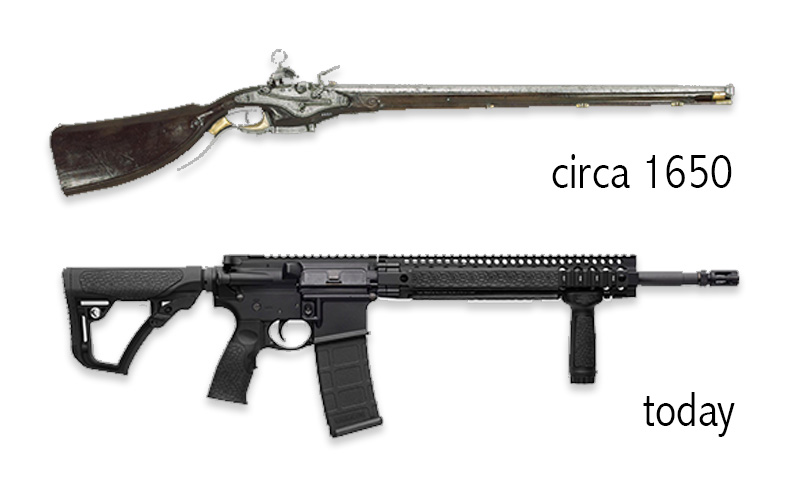 In extending the timeline just beyond the ratification of the Second Amendment and into the early 19th century, Supica highlights examples of firearms that continued the developmental trend of having the ability to fire multiple shots with minimal effort, minimal disruption of the firing position and without the need for reloading – all characteristics of today’s semi-automatic sporting arms so demonized by anti-gunners: 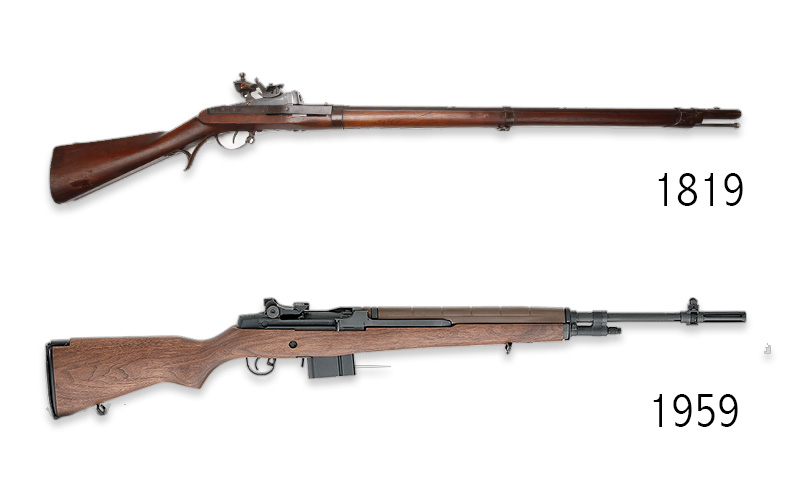 The late 18th and early 19th century saw numerous efforts to develop a breechloading firearm, with the primary purpose of allowing a higher rate of fire from single-shot firearms using the flintlock and percussion ignition systems. A breechloader can be loaded significantly faster than a muzzleloader.

The Ferguson breechloading flintlock was introduced around 1775 and saw limited use by the British in the Revolutionary War. By the time of the American Civil War, several effective breechloading systems had been developed for percussion firearms, the Sharps likely the best known with around 140,000 percussion specimens produced.

These repeaters used a rotating cluster of barrels. Since most were double-action, they could be fired as fast as the trigger could be pulled. This became the predominant handgun design of the late 1830s through early 1850s.


It stands to reason that like with any creation, innovators apply ingenuity, intelligence and discovery toward designing more effective and efficient tools to provide solutions to problems or improve existing technology. The aforementioned evolution of firearms development is a surefire indicator that gun manufacturers – and the early leaders of a fledgling United States – understood the demands and opportunities that existed to create more efficient, faster-to-use firearms.

Just as undeniable is the fact that firearms have always been an integral cog in the American machine and, in the employ of the hearty will and determination of the forefathers who envisioned our freedom, the ultimate equalizer in the quest to win, foster and defend our independence.

The First Amendment guarantees, among other expressive liberties, freedom of the press. When the Bill of Rights was written, the printing press served as the primary vehicle for the media, a budding nation free of telegraph, telephone, radio, television, and the Internet.

A question to those who doubt our forefathers’ insight into firearms when drafting our laws: does your flawed logic of technology versus intent also carry over to the printing press, and by extension, its extraordinarily efficient successors? Should we impose outright bans on computers and tablets? These devices permit journalists to cobble together stories much faster than if they’d used a typewriter, or worse, a telegraph. 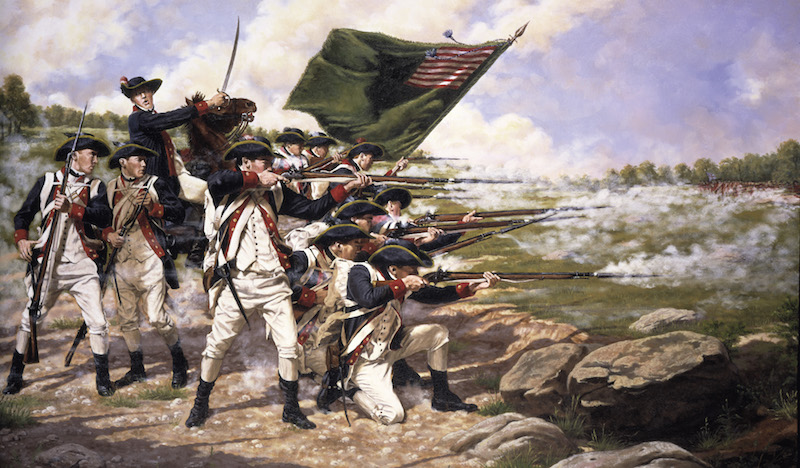 Such ignorance has no place in the annals of the American identity, as it undermines the fabric and integrity of what strengthens our nation: innovation, vision and freedom to make real the fruit of ingenuity.

Simply put, the Second Amendment applies to “arms” of all purposes. There is no hidden will, no buried caveats or minute footnotes, no evidence to suggest or prescribe that Americans should "use this, not that" in terms of their choice of firearms. It's more than muskets, it always has been, and most importantly, it shall not be infringed.