A General Officer's Pistol that saw combat on NRA News 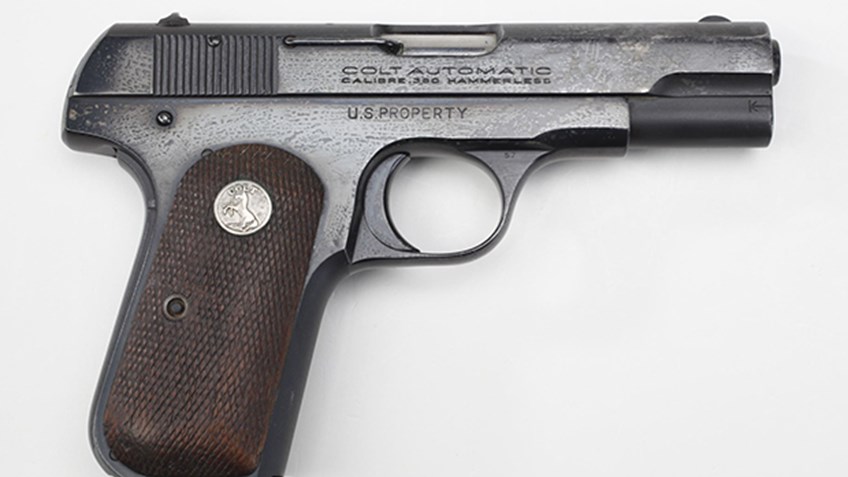 This evening's edition of Curator's Corner on Cam & Co. features a general officer's pistol unlike any other on display in the NRA National Firearms Museum.

In the museum, we display the historic general officer's pistols of Gen. Douglas MacArthur, Gen. Chuck Yeager, past NRA President Joe Foss, and President Dwight D. Eisenhower, but we can't confirm that their pistols were used for anything other than display.

And how likely is it that a general would have to use their issued firearm? It's for this reason that many generals, not wanting to be encumbered by a heavy 1911, opted for smaller, lighter sidearms like the Colt 1908 Pocket Hammerless.

This particular .380 cal. Colt 1908 was owned by Lieutenant General Ridgely Gaither; veteran of the Second World War and Korean War. It's just a standard blued pistol, but the story that comes along with it is what sets it apart. In March 1945, Gaither deployed with the 17th Airborne in Operation Varsity to help the British 21st Army Group cross the Rhine River into Western Germany.

Carrying this exact Colt 1908, Gaither and his troops found themselves pinned down by a German 20mm and the general used a standard issue .45 and this Pocket Hammerless to help silence the cannon.

If you want the full story, you'll have to tune in this evening at 5:40pm eastern time on the Sportsman Channel. There you'll get a close and personal look at general officer's pistol that actually saw combat and has some serious World War Two history attached to it.