APPEARS IN Guns of the Week History Series 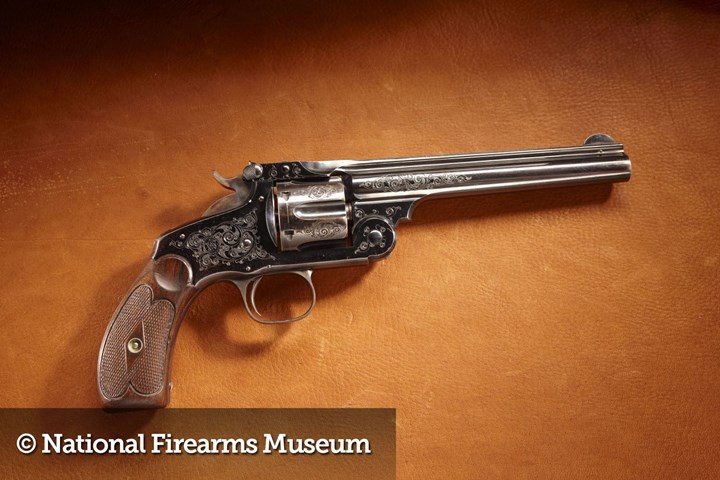 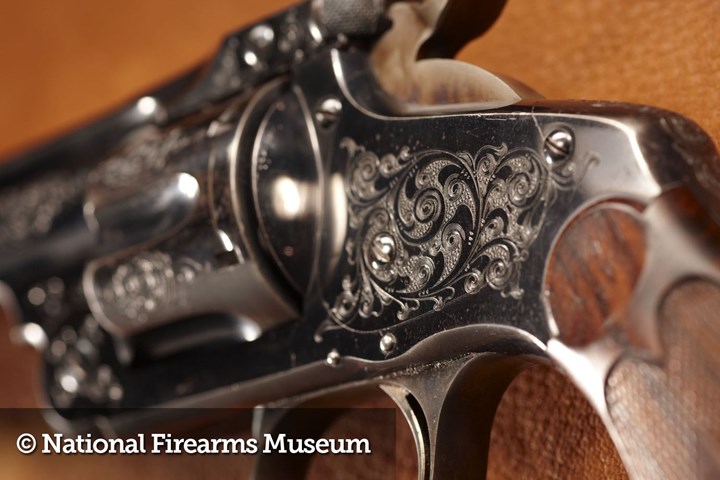 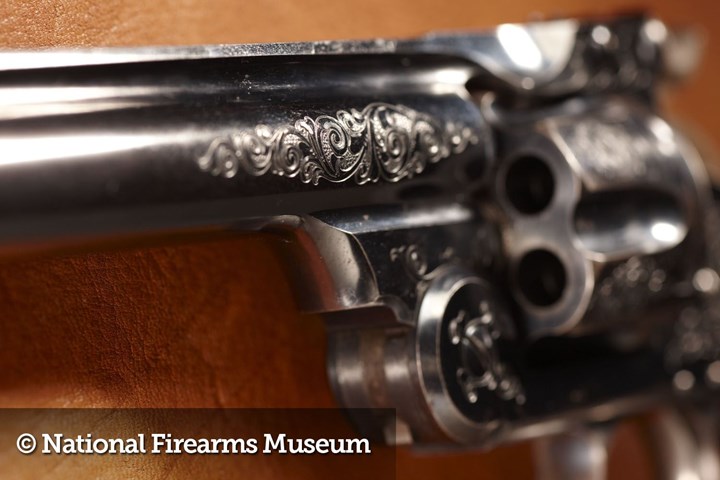 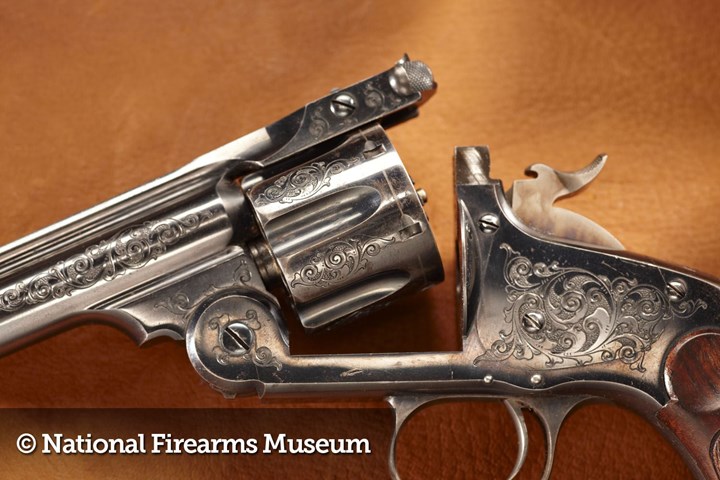 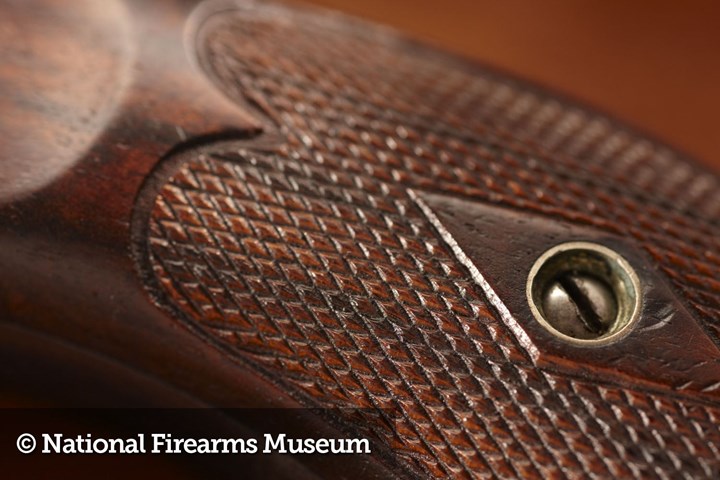 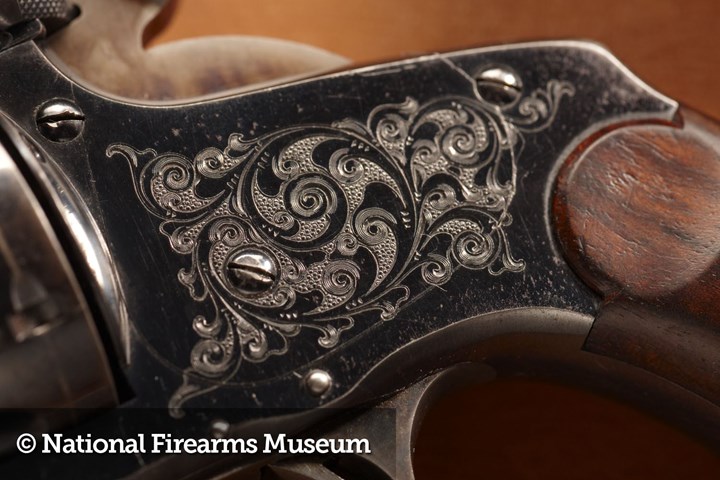 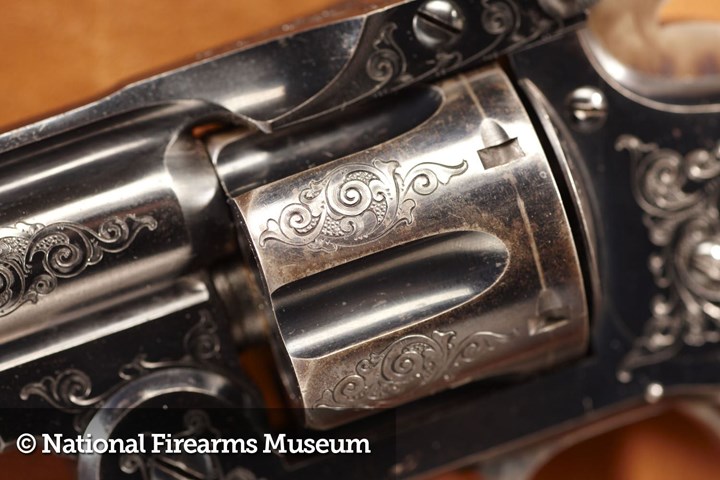 1 of 1
More
SUBSCRIBE
This revolver is attributed by Smith & Wesson factory records to future U.S. President Theodore Roosevelt. He most likely took delivery of this gun just prior to training his Rough Riders at San Antonio, Texas.

This gun features "combat target" sights and is one of only three or four known to have been chambered for the .38 U.S. Service caliber cartridge (.38 Colt). This is unusual, as most S&W New Model No. 3 revolvers were chambered in .44 Russian caliber. Engraving was done at the factory by a member of the Young family. Standard features include a top-break frame, automatic cartridge ejection as the barrel opened fully, and a rebounding-type hammer. Other variations in features and caliber also exist in New Model No. 3 revolvers.

Theodore Roosevelt was born in New York City on October 27, 1858. The son of a wealthy merchant whom Roosevelt described as "the best man I ever knew," he inherited both his father's status and his concern for the plight of those less fortunate. In his youth, the future author, naturalist, and statesman also developed an interest in both natural and U.S. history. He devoted many hours to the collection and study of various specimens, and while still a student at Harvard, he began his first book, The Naval War of 1812, which, after its publication in 1882, stood for years as the definitive work on the subject. Roosevelt graduated with honors in 1880, and in October of that year, he married Alice Lee. Mrs. Roosevelt died four years later shortly after giving birth to the couple's only child, the future Alice Roosevelt Longworth.

In 1886, Roosevelt married Edith Kermit Carow, and the Roosevelt family grew to include sons Theodore Jr., Kermit, Archibald, and Quentin, and daughter Ethel. Theodore Roosevelt's political career began in 1882, when he was elected to the New York State Assembly. While serving in the legislature, he became known as a young man of integrity who opposed the abuses of power that had long been a part of the political scene. He made an unsuccessful bid for Mayor of New York in 1886, but he served as both Civil Service Commissioner and Police Commissioner in the city. While serving in the latter role, Roosevelt furthered his reputation as a foe of vice and corruption. He resigned this position in 1897 to become Assistant Secretary of the Navy in President William McKinley's administration, where he worked to modernize the U.S. Navy.

When war broke out between the U.S. and Spain in 1898, Roosevelt resigned from this position as well to accept a commission as lieutenant colonel in the 1st U.S. Volunteer Cavalry. While serving with the "Rough Riders," as they would later be known, Roosevelt's reputation and stature continued to grow, culminating in his election as governor of New York in the election of 1898. He was nominated as the Republican Party's candidate for the office of Vice President of the United States in 1900, and, after the assassination of William McKinley a year later, Roosevelt became the nation's 26th president. Roosevelt's term as president marked a high point in Progressive Era-reforms.

Under his leadership, anti-trust and pure food and drug legislation was passed, as were regulatory measures governing the railroads. His love of nature and the outdoors, and his belief in conservation of natural resources led to significant expansion of the national forest and national park systems. In the international arena, Roosevelt was awarded the Nobel Peace Prize for his role in mediating a settlement to the Russo-Japanese War of 1905, and a new, modern navy, dubbed the "Great White Fleet," set out on an around-the-world voyage intended to demonstrate U.S. naval power. The Panama Canal was also constructed during Roosevelt's administration. Although eligible for election to a full second term, Roosevelt blocked his own renomination and threw his support to William Howard Taft, who had served as Secretary of War in Roosevelt's administration.

After Taft's election, relations between the two men became strained when the new president's policies drifted sharply from those of his predecessor. Consequently, Roosevelt challenged Taft's 1912 bid for a second term. Although the Republican Party leadership had supported Roosevelt's candidacy in 1908, the former president found a different set of circumstances four years later. Failing to secure the Party's nomination, Roosevelt bolted and formed the Progressive, or "Bull Moose" Party, which enjoyed the support of prominent reformers including Chicago settlement house founder Jane Addams. Roosevelt's bid to recapture the White House failed, but his candidacy split the Republican vote and cost Taft the election, enabling Democrat Woodrow Wilson to emerge victorious. Roosevelt continued to speak out on issues of importance of the time. He vigorously opposed various aspects of Wilson's foreign policy regarding affairs in Mexico and Europe.

When the United States entered the First World War, the old warrior-statesman made a bid to raise an American division to fight in France, but the offer was refused by the War Department. His sons entered military service, and Quentin, the youngest of the Roosevelt clan, was killed when his airplane was shot down behind German lines. In addition to his political and diplomatic accomplishments, Theodore Roosevelt is also known as a man who loved the outdoors and who believed in the conservation of natural resources.

Between 1883 and 1886, he lived and worked on a ranch in the Badlands of North Dakota before returning to the political arena and to public service on a full-time basis. As president, he established 51 bird sanctuaries, four major game preserves, the National Monuments system within the National Park Service, the National Conservation Commission, the Inland Waterways Commission, and he also worked to rebuild the once-great bison herds of the Great Plains.

After leaving the White House in 1909, he traveled to Africa on an extended hunting and scientific expedition under the auspices of the Smithsonian Institution. Roosevelt spent the winter of 1913-14 in Brazil collecting specimens for the American Museum of Natural History. His superior intellect combined with his love of nature, and over the course of his lifetime, he became a noted authority on North American mammals, and his knowledge of birds equalled that of many experts.

His interest in hunting is well-known, but Roosevelt encouraged sportsmanship as well as knowledge of the habits and habitat of game animals. He also wrote extensively on the outdoors, hunting, and related topics, publishing 20 books on these subjects. Roosevelt possessed a keen interest in firearms and the shooting disciplines. He was a Life Member of the National Rifle Association, and he taught proper shooting technique and stressed the importance of firearms safety to his sons and to members of his extended family. They regularly engaged in target competitions at their Oyster Bay, Long Island home, and the younger Roosevelts accompanied their father on safari and expeditions.

The senior Roosevelt was fond of Colt revolvers and Winchester lever-action rifles, and he owned several of each, including a Winchester Model 1876 in .45-75 caliber that featured a shotgun butt, half magazine, half octagonal barrel, engraved pistol grip and fore end, and engravings by noted artist John Ulrich. He also owned rifles produced by Sharps, Freund, Ballard, and Holland and Holland, pistols from Smith & Wesson and Luger, and shotguns manufactured by Lefaucheux, Parker, Fox, and W & C Scott & son, as well as the Fred Adolph double rifle and FN pistol featured in the National Firearms Museum.

After a long life dedicated to public service, conservation, and humanitarian pursuits, Theodore Roosevelt died quietly in his sleep at his Oyster Bay home on January 6, 1919.