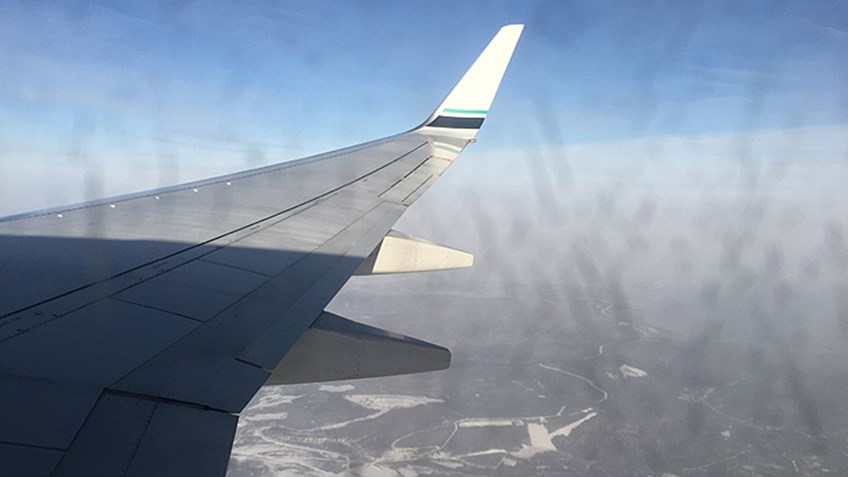 Fairbanks, Alaksa - I’ve been 30,000 feet over Alaska for about two hours now. One more and we’re on the ground in Fairbanks. My first time in 49th State.

A quick glance outside a properly scuffed Alaska Air 737 window reveals towering mountains sprinkled with snow. Tiny specs of gray and green poke their way through the white blankets in a gasping effort to bake in the seldom seen sun.
I have to admit it - I’m pretty pumped.

Not that I’m expecting to find the magic of Jack London’s Call of the Wild or White Fang when we touch terra firma (well, maybe a little), but because I’m heading to Fairbanks for the 2015 National Rifle Championships.

A gathering of eight schools and a handful of individual competitors vying for a shot at two different title belts; Air Rifle and Smallbore.

West Virginia appears to be the favorite. Led by junior Garrett Sprugeon, the Mountaineers are going for their 17th national championship and second in a row. Given their performance at the Great American Rifle Conference tournament, the odds to appear to be in their favor.

Then we have the upstarts. Nebraska’s all-female team just on the cusp of making a move for the big chair. Kentucky attempting to emulate the unbelievable run of their Wildcat basketball brethrens. TCU plunging into the inhospitably forecasted -36 degree climate from the belly of a Texas sun. Each of them, along with Jacksonville State, the U.S. Air Force Academy, and Murray State, have just as good a shot at upsetting West Virginia as the next. 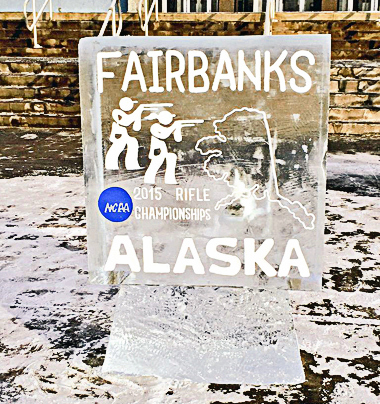 The Captain calls over the intercom with news of our descent. Ground temperatures have settled in at a muggy -22 degrees. That’s encouraging. After all, -36 is just ridiculous.

Soon I’ll stow my laptop and begin the inevitable task of charging into the frigid north. Sure, my Viking blood and a good jacket is all I’ll need to survive the run from airport to taxi and from taxi to hotel, but will I arrive in my hotel room this evening with all my fingers, toes, and nose still attached? It’s a question you have to ask yourself out here.

A quick spin through the University of Alaska’s Fairbanks campus was exactly what one might expect. Students milling around in winter gear, snow on everything from walkways to statues, and a little something special for those in town for the NCAA Rifle Championships. It’s an ice sculpture. Male and female shooters, an outline of Alaska, and the NCAA logo.

We jump out for a photo and feel the cold take hold. It hurts to breath. Fingers clamber for cover as they seize in the near arctic air. Two snaps later and we’re back in the car. That’s it for the night. Time to get back to the hotel.

Pulling into the parking lot, I plug the car into an open outlet. Yes, in this weather, you need to plug in the engine or it will freeze. Not something you want to tackle after a healthy helping orange juice and flapjacks.

Doors to the championships open at 8:00am Fairbanks time. Those who plugged in their cars last night should have no problem answering the bell. That's when it begins. The moment where all competitors will be on equal footing. The last moments before shooters are find their place on the line, take aim, and fire. 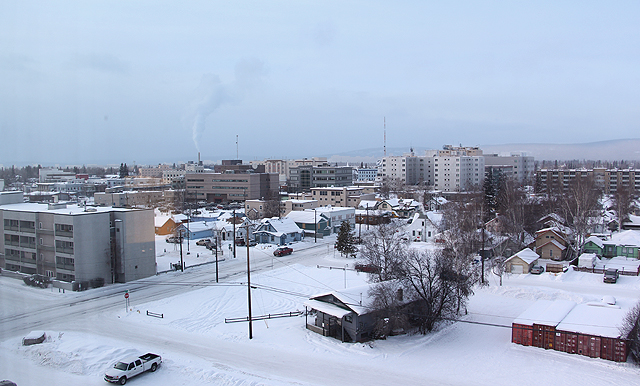