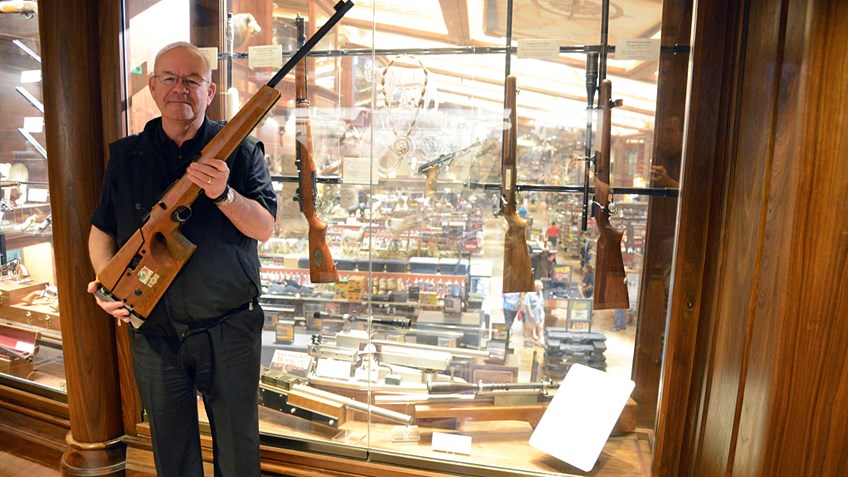 United States shooter Lanny Bassham won the gold medal in smallbore three position at the 1976 Summer Olympics in Montreal. An accomplished U.S. Army shooter, Bassham was aided in his impressive feat by an equally unique rifle. Just what was so unique about it? Let's rewind the story a few years.

Bassham graduated from the University of Texas at Arlington — and its ROTC program — in 1969. After enlisting in the Army, Bassham became a member of the United States Army Marksmanship Unit, a world-class shooting team that's home to the nation's best men and women in international shooting.

When you're a good enough shot to be in the USAMU, there's a big difference between your personal firearm and a regular gun off the rack. In order for Bassham's gun of choice, a Remington 700, to be just right, he decided he needed a better stock. After working on a design, the USAMU's master armorers assembled a new custom stock, but it didn't feel right. Neither did the next stock, nor the one after that. Frustrated, Bassham decided to try his own hand at making the stock he had in mind. Eight failures later, his ninth attempt was exactly what he wanted.

It turns out Bassham knew what he was talking about and being particular paid off. Using his self-made stock, he won a handful of championships in 300-meter Free Rifle in the 1974 World Shooting Championships in Thun, Switzerland, alongside a dominating performance by the rest of Team USA.

Bassham was so excited about his new stock that he wanted an identical one made for his smallbore rifle. He was disappointed in his silver medal finish at the 1972 Summer Olympics in Munich and thought his new stock design would push him to the top in Montreal. After being turned down by renowned manufacturer Anschütz, Bassham approached Walther to make his smallbore stock. The Walther engineers didn't like the design, but they decided to take a crack at it. It's not every day that one of the world's best shooters knocks on your door and Walther saw this as a great opportunity for better exposure in international smallbore. The morning after Bassham met with Walther, he was presented with two handmade stocks that had been constructed overnight, one made to his exact specifications and one the Walther engineers had "improved" to their liking. Confident in his design and its performance in 1974, Bassham selected the former of the two.

The stock was big. Bassham's teammates nicknamed it The Oar. But it worked. Bassham won the gold in 1976 and he did it with the only Walther on the line — everyone else used Anschütz.

So just what modifications did this wonderstock have? Bassham dropped the butt plate, angled the pistol grip so the wrist doesn't break when shooting while standing, offset the rail for his offhand rest, lowered the barrel below the edges of the stock, raised his sight bases, and angled the forend up — got all that? And if you want to see the rifle in person, Lanny loaned it to the NRA National Sporting Arms Museum at Bass Pro Shops in Springfield, Missouri, where it's currently on display. The museum just had its 700,000th visitor, though, so don't think you're alone in knowing the stock's secrets.

Bassham's 35 medals in international rifle competition currently sit him at third all-time among US shooters; he set four world records along the way. Lanny is both the son and father of previous USAMU shooters, making the Basshams the only family in the unit to be represented across three generations.

After his shooting career, Bassham went on to become an esteemed shooting coach, participating in the 1984 and 1988 Olympics. He is also a motivational speaker who has written several books on the Mental Management system, a performance enhancement program he devised and used throughout his time as a professional shooter. You can check him out at http://mentalmanagement.com/.