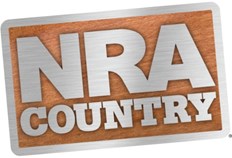 Be sure to get NRA COUNTRY CONNECTED and JOIN the FREE Fan Club at NRACountry.com. Membership includes access to online concerts, fan club parties, contests, VIP meet & greets, exclusive content from your favorite country artists and other special offers and discounts on great outdoor gear and merchandise!

About NRA Country
Respect. Honor. Freedom. It's a lifestyle and a bond between the best and the brightest in country music and hard-working americans. NRA Country is powered by pride, love of country, respect for the military, and our responsibility to protect our great American lifestyle. NRA Country celebrates these values with concerts and events benefiting military and veteran services organizations, first responders, conservation organizations, firearm safety programs, and local charities making a difference in their communities. Get NRA Country Connected at www.nracountry.com and get the latest artists info and exclusive events on Facebook, Twitter, Instagram and Pinterest.

About Lee Brice
Lee Brice's 'I Don't Dance' (Sept. 9, Curb Records) marked his first #1 Billboard Country debut and highest-ever bow on the Billboard 200, opening at #5. Along with the smash success of the album's title track - which reached #1 at country radio - the "evocative, rough-edged singer" (NY Times), whose music is "impossible to pigeonhole" (CMT), recorded his third studio album in Nashville, writing and producing 13 of the deluxe editions 6 songs, and playing almost every instrument.

"Nobody in Nashville writes better love songs right now than Brice," says USA Today. Brice celebrated the album's massive release week with performances on the Today Show and Letterman. He also teamed up with Luke Bryan for two sold-out shows in  New York, including a performance at Madison Square Garden, where Today Show host Hoda Kotb surprised Brice onstage with a career milestone plaque recognizing "I Don't Dance" as the year's fastest RIAA platinum-certified country single. Lee Brice - whose "I Don't Dnace" earned him a CMA "Song of the Year" nomination in November - will soon announce dates for a Spring 2015 headline Tour.

Thompson Square's breakthrough hit "Are You Gonna Kiss Me or Not" has surpassed two millions in sales, was the #1 Digital Soundscan Single for 5 weeks straight, the #1 Country Ringtone for 12 consecutive weeks and the Most Played Song at the Country Radio in 2011 (Mediates). Thompson Square followed that success with the award-winning hit, "I Got You," and critically-acclaimed "Glass." Thompson Square's star continues to rise with the #1 GOLD selling heart-tugger "If I Didn't Have You" and Top 10 hit, "Everything I Shouldn't Be Thinking About," both from the duo's current album, JUST FEELS GOOD. For more information visit: http;//www.thompsonsquare.com
###