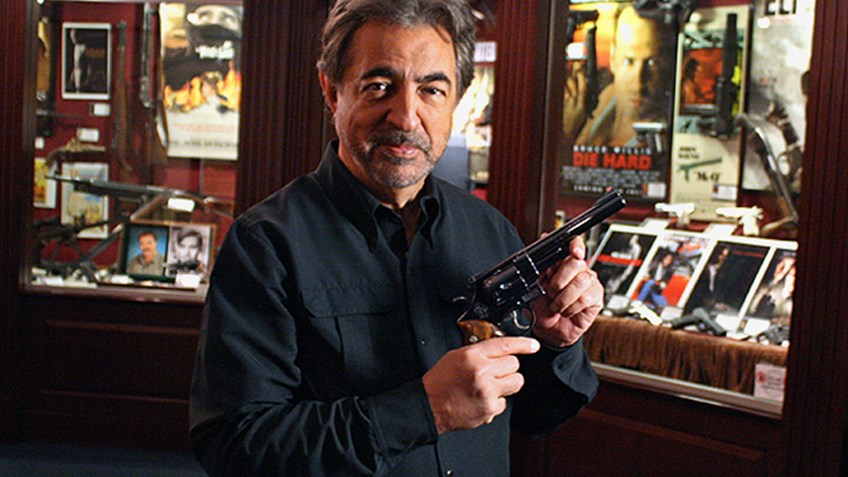 Fairfax, Virginia - Earlier this year, Hollywood actor Joe Mantenga dropped by the NRA National Firearms Museum to film a few episodes of his Outdoor Channel hit Gun Stories. An in-depth look at this history of firearms, the show travels across the nation (and last year the world) to bring viewers the best experts and guns available.

This would be his third stop at the National Firearms Museum in four years. Because we've just about covered everything ranging from Joe's background in firearms to his career as an actor, we decided to take a different angle with this interview. We wanted to know about his guns.

Specifically, what was the first gun he ever purchased, the last gun, and the next gun on his wishlist.

What was your first gun?

My first gun, and I think I still own it, is a Smith & Wesson Model 15. The reason I have it is because my first gun was a prop.

I didn’t shoot guns as a kid, I had an interest, but I didn’t have one until I was in a play called Cops. I was playing a detective and there was actually a shoot-out in the play so I had to be adept at firearms. And we used real guns with full load blanks.

I was in a theater company called the Organic Theater, we were like a rock and roll theater anyway where everything was bigger than life. So I had some really good instruction from someone who really understood firearms. He took us out and the theater company bought the guns for the show. So I had to learn on this gun. I was so taken with it by the end of the run that I bought it from the theater company. I had to have it. I’m glad I bought because it was 1975 I think and it’s in great shape.

What gun did you purchase last?

The last gun I purchased ... let me think because I have some that are in flux right now.

The last thing I purchased was a Ruger, a takedown 10/22, the one that goes in the backpack. I actually bought two of them; I bought the stainless and I bought the blued version because they looked different enough, cool enough, and fun enough. I love the 10/22 anyway … I actually have one of the original wooden stock ones from many years ago.

What gun are you going to purchase next?

I think the next one might be the Tavor. That Israeli bullpup. We did a whole section on bullpups and I liked the AUG, the French one - FAMAS I think, but I really like that Tavor so I think that there might be one out there with my name on it.

Not a bad collection for a Chicago boy living in Hollywood.

IN THIS ARTICLE
NRA Museum Around the NRA
More
SUBSCRIBE