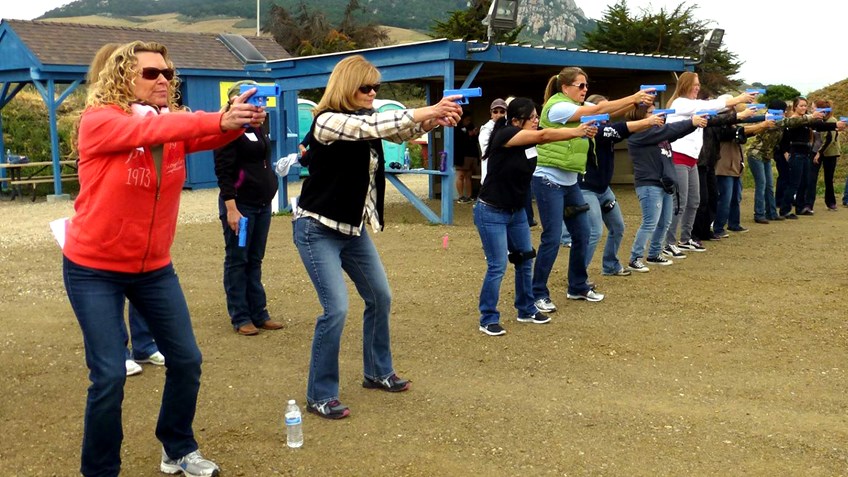 It’s 8:00 a.m. on the fourth Saturday of the month at the Hogue Action Pistol Range on Highway 1 along the California Central Coast. About 15 women will spend the next two hours setting up First Shots, along with the six bays that will be used for the day's clinic. In a little over two hours, 60 new and beginner shooters—all women—will start arriving. Mothers and daughters, groups of friends, co-workers, all ranging in age from 18 to 70-plus. Some of them have shot a few times in their lives, but most have never picked up a gun. At first lot of them look nervous and unsure about their decision to show up, but by the time they leave you won’t be able to wipe the smiles from their faces.

These women are coming to participate in a Friends of NRA-funded program called Guns And Ladies, also known as GALs. Thanks to grants from The NRA Foundation, the program is able to provide all necessary ammunition and firearms and meet one of its original goals—to never charge participants to attend. We did not want anyone to be unable to attend because of an inability to pay, and thanks to The NRA Foundation, we’ve been able to fulfill that goal every month since 2012! 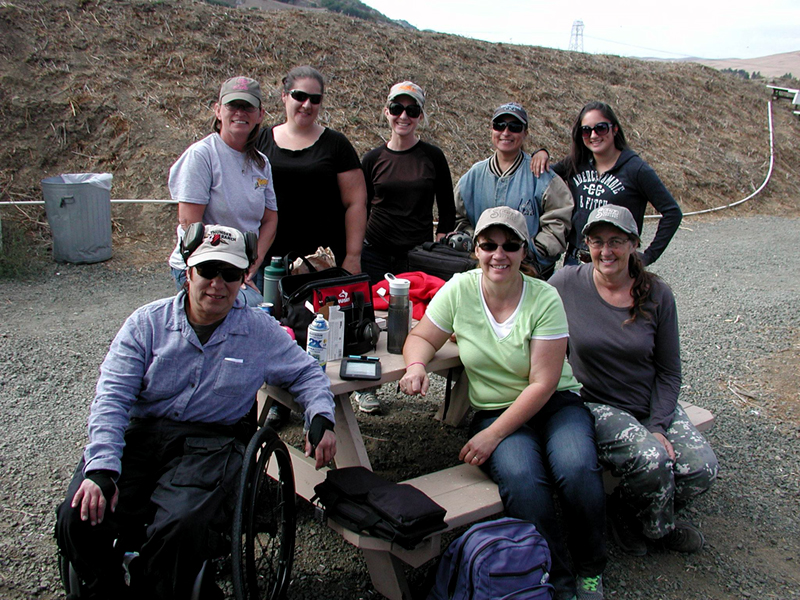 At the start of the morning, the women go through an initial educational orientation that covers the four rules of safe gun handling, cold range rules and a recently added discussion on the differences among types of ammunition, magazines and firearms. The new material includes an in-depth description of what a semi-automatic firearm is and what it can and cannot do. Additionally, we explain to them what exactly an ‘AR’ is and, probably more importantly, what it isn’t. The ladies are shocked and, quite frankly, amazed by what they are learning. The follow-up questions and discussions throughout the day have let us know just how necessary getting this information out really is.

After orientation, the women start learning to ‘shoot like girls,’ and that’s when the real fun begins. They discover what their dominant eye is and, for some of them, the joys of being cross-dominant. Then comes site alignment, grip (using plastic practice handguns) and stance. At this point, a large part of what we are doing is not just showing them what to do, but explaining why, as women, we need to do things certain ways. While starting to build this respect and trust, the tension in their faces visibly decreases as they begin to understand the logic of women teaching women. 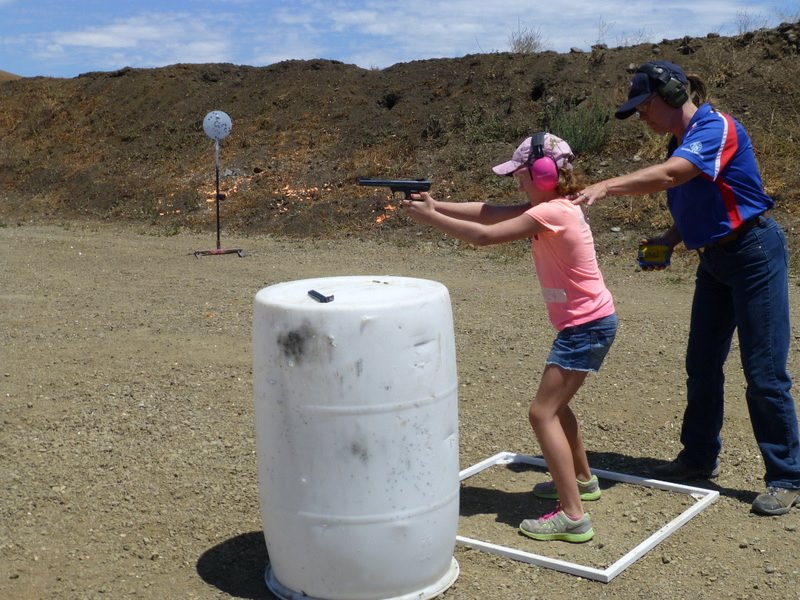 Then it’s on to First Shots, with the women split up into smaller groups with three instructors and two safety officers each. Anxieties tend to increase again at the start of the hands-on training, but that doesn't last long. First, the women are shown how to load the magazines for the .22 pistols they will be shooting. At the shooting table, they are given one-on-one instruction on how to operate the handgun—how to load, chamber and shoot. First Shots are generally done with three magazines—with one, three and five rounds—giving them practice at loading and unloading the magazine. By the end of First Shots, there’s a huge shift in the attitude and tension levels, and, for the most part, the women are excited about going to the different bays and trying out different firearms.

For the rest of the day, participants are free to go to as many or as few bays as they choose. Surprisingly, one of the most popular bays is the ‘trigger control drill.’ This drill might not sound very fun, but the ladies love it. Each shooter practices a trigger pull drill using a .22 pistol and shoots two or three magazines. When they’re on-target and can see the improvement in their groupings, they split a playing card. Talk about a confidence booster! Huge smiles, hugs and applause are common on this bay. 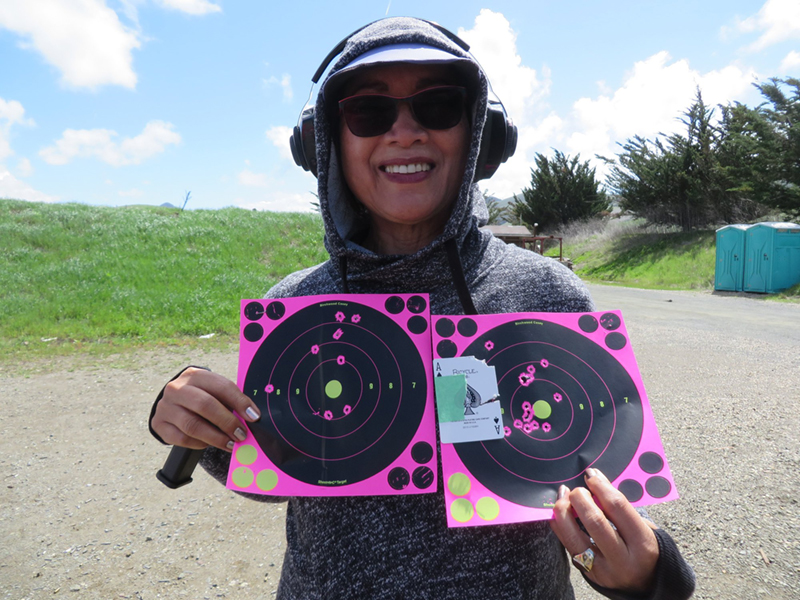 Next up is the shotgun bay with both a metal targets and clays. There’s a lot of hooting and hollering at this one when the clays are hit. The support that the women get from each other is out of this world and a huge part of why each clinic is so successful.

The rest of the bays are generally a lot quieter, but no less exciting for the shooters. There’s a 9mm Move-n-Shoot—a condensed version of a typical United States Practical Shooting Association (USPSA) stage—which has the ladies shoot through windows and move around walls to the next target. There is also a revolver bay where participants are taught the difference between single and double action. Occasionally the Texas Star will be out, and it’s surprising how accurate first-time shooters can be with a moving target. 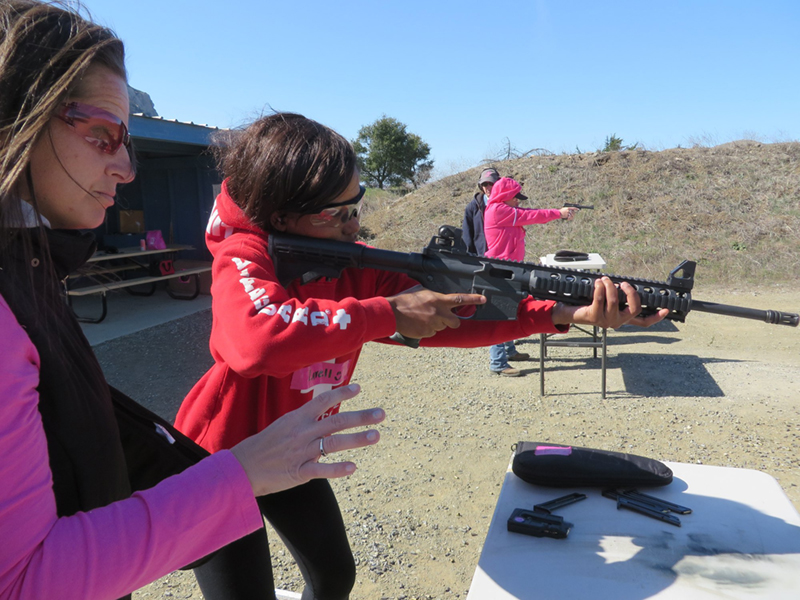 Lastly, there are two rifle bays—Precision and Modern. Precision is a great starting place for really nervous shooters. Sitting at the shooting table with a .22 bolt action rifle is relaxing, not to mention you can blast lollipops at about fifty feet. The Modern rifle bay is always packed. So many women have heard about AR’s from the news, their husbands, etc., so their curiosity definitely gets the better of them—they want to shoot one! The modern rifle instructors are amazing, and in no time they have women on target at distances up to 250 feet.

As the afternoon wraps up, the ladies are laughing, smiling, exchanging stories and comparing targets. Volunteers start tearing down, feeling as excited and successful as the participants. 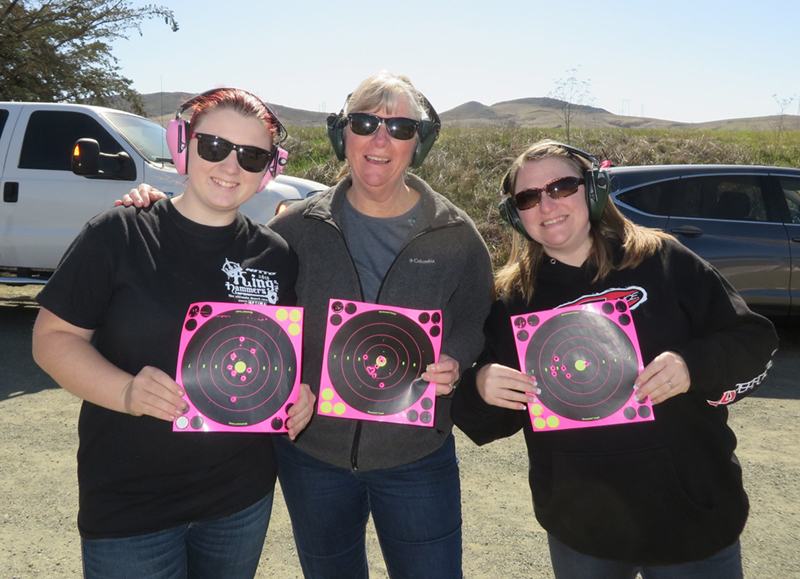 The program is in its seventh year now, and the interest hasn’t dropped at all. If anything, it’s getting even more popular. Online registration opens at 7:00 a.m. on the first day of the month, and typically there are at least 60 sign-ups and 25 waiting list spots filled in less than 30 minutes. Last month, capacity was hit in seven and a half minutes!

A comment on Facebook summed up the demand for this program quite well: “Geez, I didn’t know getting signed up was going to be like trying to get Garth Brooks tickets!”

Apply for an NRA Foundation grant for your firearms education program at nrafoundation.org. Click here to learn more about Friends of NRA and find a fundraising event near you.