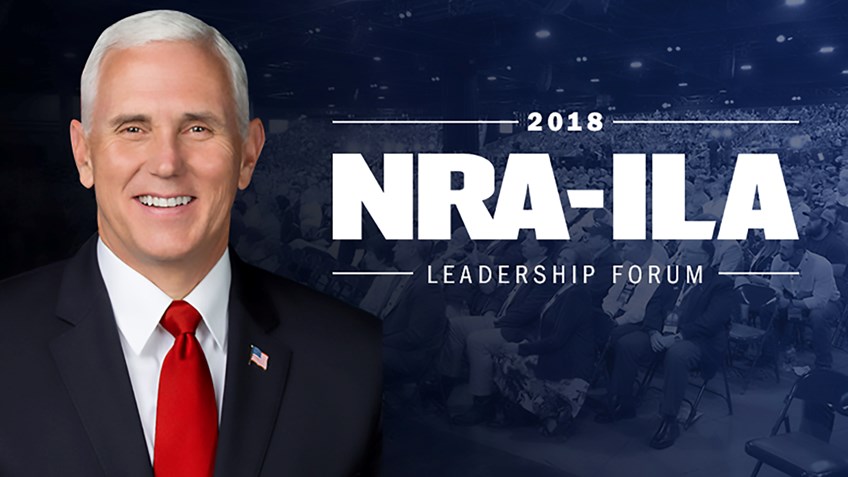 Next Friday, May 4, the Kay Bailey Hutchison Convention Center in Dallas, Texas, will host one of the most politically significant and popular events in the country. The NRA-ILA Leadership Forum brings together our nation's top Second Amendment leaders in government, the media, and the entertainment industry with NRA members at the NRA Annual Meetings and Exhibits.

The annual event is a must-stop for candidates seeking the highest levels of elected office—including governor, congressman, Senator, and even President of the United States. This year, the Forum kicks off the 2018 election cycle and will feature a powerful lineup of pro-freedom speakers, including Vice President Mike Pence as the keynote.

"It's an honor to have Vice President Pence address our members in Dallas,” said Chris W. Cox, executive director of the NRA-ILA. “He is a lifetime supporter of the Second Amendment and he has a long a record of fighting to defend our freedoms. Now more than ever we need principled people in public office who will fight to defend the Constitution. Our members are excited to hear him speak and thank him for his leadership."

Previously scheduled for 12:30 p.m., the event will now start at 11:50 p.m., with doors opening at 9:00 a.m. for attendees to claim their seats in the Arena of the Kay Bailey Hutchison Convention Center. You don’t want to miss this chance to join in celebration and support of the Second Amendment. Click here to buy your tickets today!

* Due to the attendance of the Vice President of the United States, the U.S. Secret Service will be responsible for event security at the NRA-ILA Leadership Forum.  As a result, firearms and firearm accessories, knives or weapons of any kind will be prohibited in the forum prior to and during his attendance. Click here for additional information.