Friends of NRA Family Time in the Field 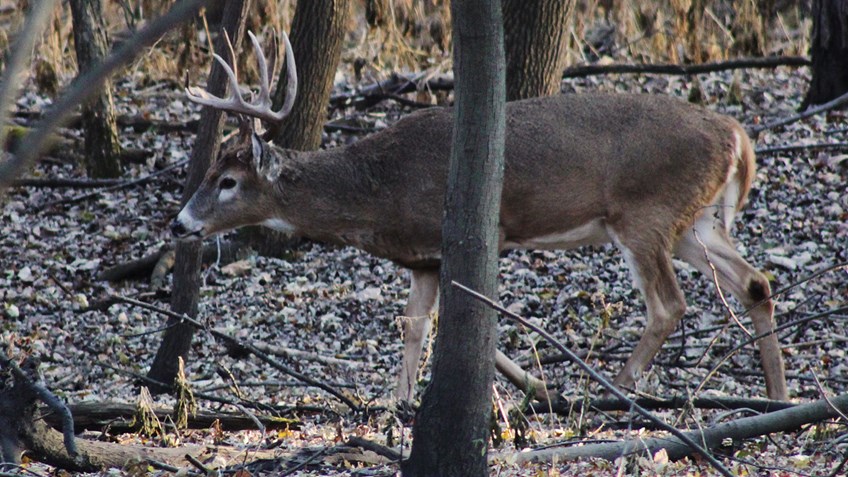 For Friends of NRA and The NRA Foundation, valuing family means much more than just putting on family-friendly fundraising events. It means sharing the shooting sports traditions, passion for freedom and outdoor lifestyles that we work each day to preserve. In the following personal narrative entitled “Frozen Eyes,” Minnesota NRA Field Rep Eric Linder’s daughter Sophie perfectly captures that sense of learning and loving our American hunting heritage and Second Amendment rights.

There wasn’t any snow on the ground yet, so only the dry leaves crunched beneath our heavy boots. The sky was a clear blue and just beginning to turn golden from the setting sun. The air running in and out of my nose stung from being so dry. The bags under my eyelids weighed heavily, causing my eyes to grow more tired by the hour. Hunting season won’t allow much sleep, but I didn’t even want it. It had always been worth the lack of sleep, no matter how it turned out.

We’ve never had any luck opening morning, but I don’t mind. I simply enjoy watching the sunrise over the house that lives across the swamp, hearing all of the creatures wake up one by one, and feeling the grass thaw beneath me. Every couple minutes I will check my scope to make sure my aim is on and my hands are calm, even though that will be no use when the time comes. While I do this, my dad will check his binoculars and scan the whole track of land, as to not miss a single breathing creature, just in case.

The 2016 opener week started as every other; not much action the first couple days. There were beautiful sunsets and sunrises, and hundreds of shots that we counted in the distance from luckier hunters. One night, though, was different from all the rest. I don’t remember the day or how far into the season it was, but little does it matter.

We get to our spot beneath our green tree and set down our guns and sunflower seeds on top of the shells from the morning before. As usual, I check my scope, and he checks the binoculars, then we sit. We just sit. We watch the sunset in silence, and wait, and wait, and wait. This particular evening we only waited for about an hour and a half, until it happened.

Normally we will hear the crunching of leaves coming from the woods to our left, where the deer will usually come out, or hear them stomping in through the swamp. But this time he came from the right—the only place with grass that doesn’t make a sound. So all of a sudden, a large-bodied six-pointer was walking straight at us from only 15 yards. With no warning, I was stunned. I didn’t know if my dad saw him yet, so I just whispered as quietly as I could. 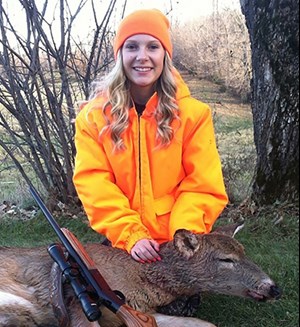 “Dad.” This was code for: “There’s definitely a deer, and you need to stop moving right now.” Out of my peripheral vision I saw how, as practiced, every muscle of his stopped. Our breathing stopped, our blinking stopped. The world froze in that moment. Nothing seemed to make a sound, except the breathing that came from the brown figure nearby. It was as if all the other animals stopped and waited to see what would happen next. We knew that even the slightest twitch or sound would send him running. We were able to see the moistness of his nose, the break in the fur every time he breathed, and every single blink he made.

Slowly, the buck took his time looking around and sniffing the air. How he didn’t smell us is completely beyond me. As he continued moving towards us my adrenaline climbed higher than it had ever been in my whole life. I was surprised he couldn’t hear my heart racing and the blood gushing through my veins at lightning speed. After what seemed like half an hour—and was probably only two minutes—he was the closest he would get, about 15 feet.

Now, I know that deer are color blind, but this one had to have been legally blind because he was staring straight at our faces. I believe I made eye contact with him for at least five minutes. It was a dead stare. I was continuously afraid to blink, thinking that the slightest flutter would finally get him to realize we were there. I couldn’t even look at my dad for assurance of what to do next, knowing the whites of my eyes would stick out to the deer like flashlights.

Finally, after what seemed like hours, he stuck his face up in the air and snorted. Any time this happens, most hopes are lost that you’ll get the chance to even aim. He knew something wasn’t right and began trotting away from us.

I’ve relived that story with my dad countless times and to many people. I’ve watched the pride return to his eyes as he sits there and tries to describe the intensity felt between us and that deer. But no matter how hard he or I try, nothing will capture or compare to that November evening. That is something that will only be understood by my dad and me, and I am just fine with that.

Learn more about how The NRA Foundation supports hunting initiatives at www.nrahunting.com. Attend a Friends of NRA event to invest in the next generation of shooting sports enthusiasts and Second Amendment champions. Click here to find one near you.