Making Smoke and Raising Funds in Memory of Elmer Keith 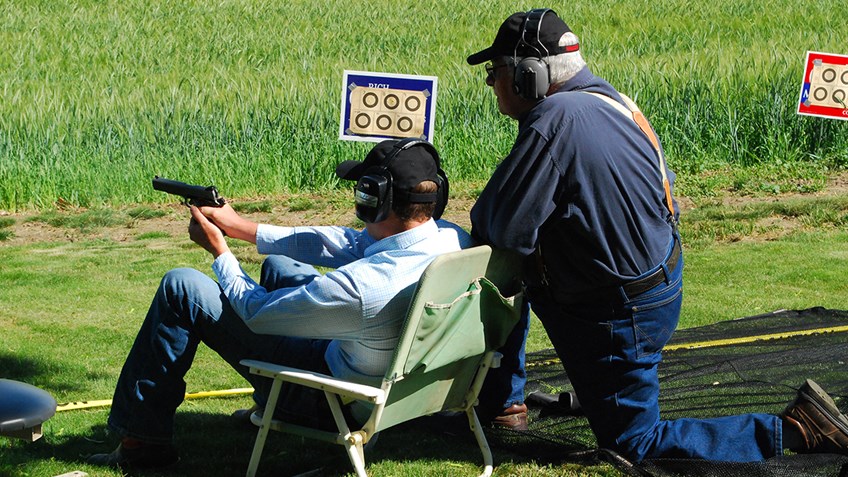 In the Palouse country of southeastern Washington, there’s a small community called Valleyford. If you were there in the early days of June you would have heard the crack of handguns cutting through the air followed by the solid slap of steel plates. This welcomed commotion is the result of group of avid handgunners who have gathered every year since 2001 for the Elmer Keith Memorial Long Range Handgun Match.

The match honors a man who not only inspired an entire generation of gun enthusiasts with his writing and influential role in the creation of the .357 Magnum, .41 Magnum and .44 Magnum, but who also lived a simple life as a rancher in rural Idaho. The memorial match has attracted a number of Elmer Keith’s devoted followers and earned close to $100,000 for The NRA Foundation.

It started when Will DeRuyter, the memorial shoot founder and organizer, took an interest in Elmer Keith’s writing—particularly the legendary story of Keith shooting a wounded mule deer at more than 600 yards with his .44 Magnum handgun. DeRuyter himself had always been a rifle hunter and was amazed that Keith had made such an incredible shot with a handgun. 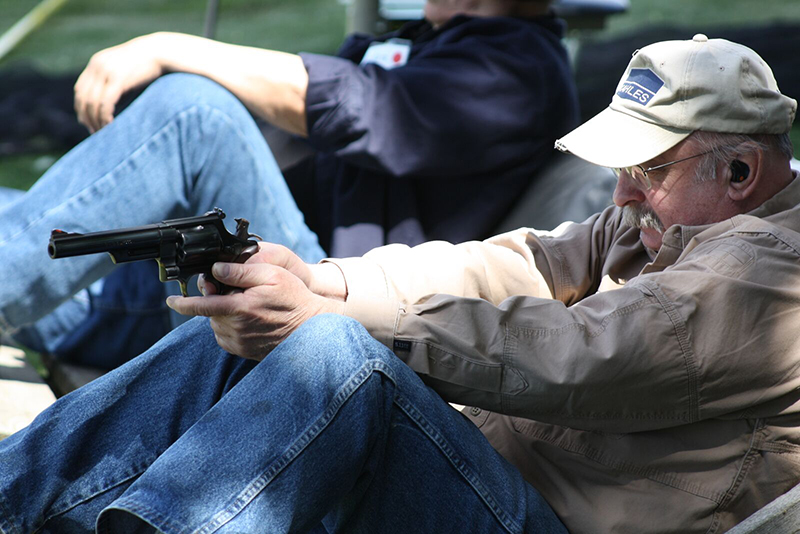 So, out of curiosity, he went into his backyard with his own .44 Magnum, picked out a rock on the hillside that was about 150 yards away and began shooting at it. After emptying several boxes of cartridges, he finally hit the rock and soon thoroughly demolished it. DeRuyter then had steel targets made and decided he no longer wanted to keep all the fun to himself.

“Shooting at the steel plate was so much fun that I decided to invite 300 of my closest friends to come over and join in,” DeRuyter said as he recalled the story. “That first year only 12 of them showed up, but we shot a lot, and I fed them very well. We auctioned off some items, and we sent $650 off to The NRA Foundation.” The group had such a great time that it was decided the match would become an annual affair.

The next year about 20 people attended and the money raised nearly doubled. After several years of depositing the checks into a general fund, it was suggested by someone that DeRuyter and his friends establish a named fund with The NRA Foundation in Elmer Keith’s honor. So, the Elmer Keith Memorial Acorn Fund was created and the annual invitational match was established.

Every year on the first day of the match, roughly 45 participants from across the country and ranging in age from seven to 85 meet at the wheat fields near DeRuyter’s home. The range is quickly set up, and later in the afternoon participants sight in their handguns and take as many practice shots as needed. After sharing a large spaghetti dinner, everyone heads to bed to rest up for the exciting day of competition ahead. 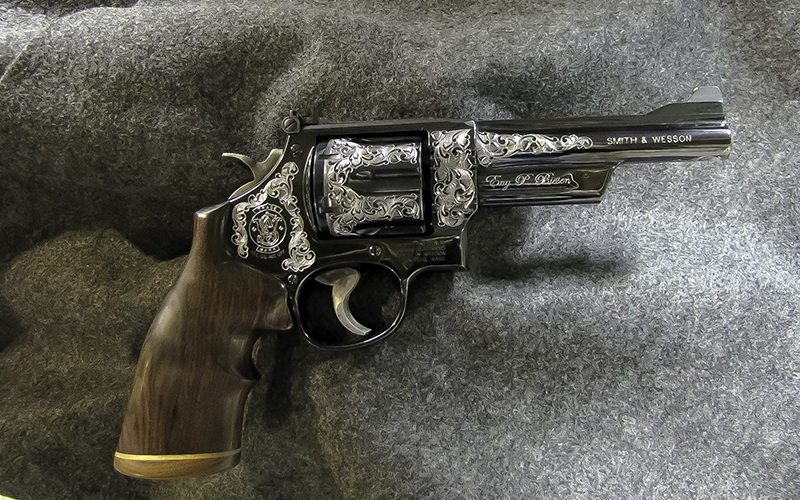 Smith & Wesson M-24 customized by Rick Bemel of Creative Arms and engraved by Paula Biesen. This will be the grand prize at a future event.

Once everyone has their fill of hot coffee and rolls the next morning, the competition begins. Each competitor is given 10 minutes to fire 12 shots at various targets down the range. Each shot is awarded a higher point value based on distance of the target and the shooter’s ability to successfully hit a called shot.

Dave Workman, former NRA Board Member and senior editor of the Second Amendment Foundation, has attended the match multiple times and remarked on the marksmanship displayed at the range. “Some of the participants are probably the best long-range handgun shots around,” he said. “They just don’t feel the need to run around the countryside proving it. It is not easy to hit a target at 100 yards, much less 150 or 200, with an open sight handgun. It’s a testament to concentration and every principle of good marksmanship.”

Believe it or not, the 200 yard shot isn’t even the farthest possible target. At about 600 yards a 30 inch square steel plate stands for anyone who dares attempt the legendary Elmer Keith mule deer shot.

In the middle of the day lunch is served, featuring pork ribs and brisket as the main attraction. If you haven’t caught on yet, the theme of good food is nearly as important as the theme of good shooting. After all, you can’t expect someone to shoot straight on an empty stomach. Once everyone has refueled at lunch, the shooting continues until all participants have had their chance to compete.

Then the range is closed and the banquet begins, capping off the event with another shared meal plus awards, raffles and the auction. The top three shooters receive awards, and this year a sudden victory shootout was required to determine the rankings when competition resulted in an exciting three way tie. 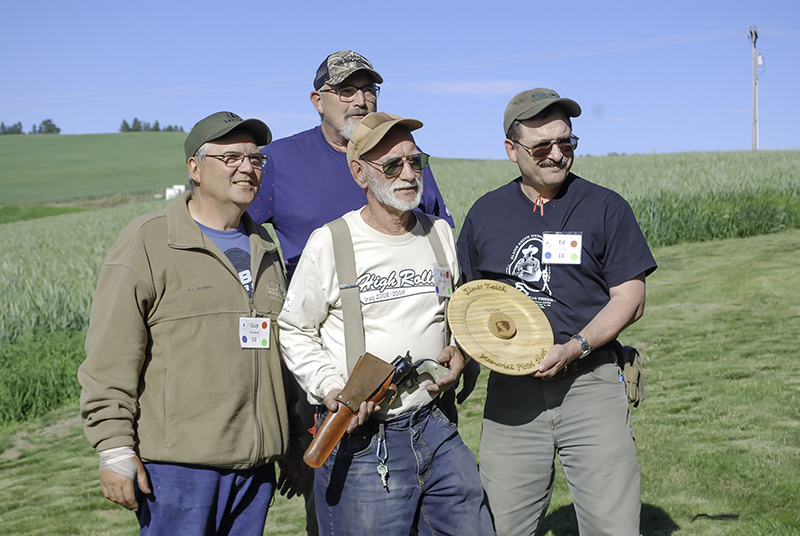 Every year the grand prize of the evening’s raffle is a custom handgun, either internally enhanced or handsomely engraved. These custom handguns are instantly treasured by their new owners and often brought back to be used in the following years of competition.

After the banquet, campfires are built and friends gather ‘round. Many close relationships are formed during the memorial match, and every year old friends reacquaint themselves and create new memories together.

Everyone involved has a passion for the memorial match. “They’re top notch people,” Workman stated simply, describing the group as whole. “They’re the kind of people you would be delighted to spend an evening with around the campfire.” It’s a perfect and humble description that tells you everything you need to know about the wonderful people who do so much to keep the memory of Elmer Keith alive and raise money to protect our Second Amendment rights. At the end of this year’s competition, a new event record was set when more than $10,000 was raised. This brings the Elmer Keith Memorial Acorn Fund extremely close to their goal of $100,000.

When asked if he believed there was anything unique about his Elmer Keith Memorial Match, DeRuyter response started a little surprisingly. “No,” he began, “there’s nothing at all unique about it.” He then explained further. “The reason I say that is because anybody can have a fundraiser like this,” he continued. “The point is that someone of modest means, which I consider myself, can play with the big boys who simply sit down and write a check to support the cause. But I think the way we do it is a whole lot more fun.”

In essence, the Elmer Keith Memorial Long Range Handgun Match is an event where you’ll find a gathering of kind and good-hearted people taking part in a friendly competition, enjoying each other’s company, raising money and honoring a man—Elmer Keith—that they hold dear to their hearts.