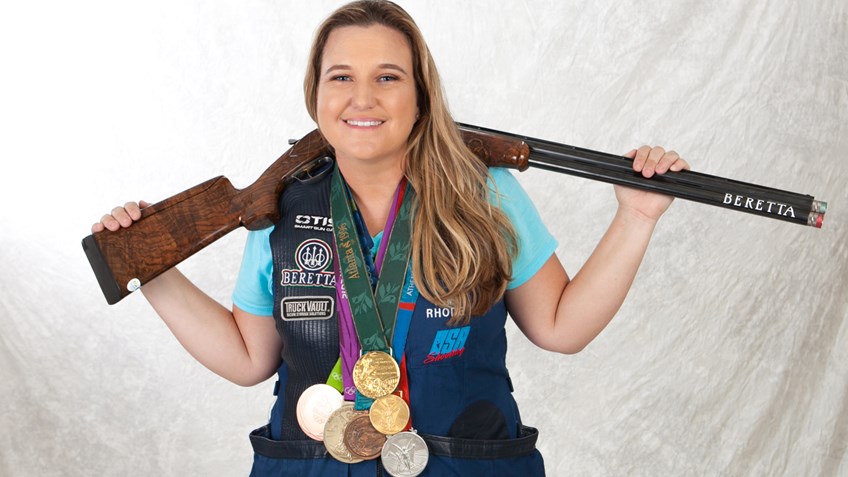 Shooting Straight is an interview-style series highlighting the movers and shakers supporting Friends of NRA, The NRA Foundation, and the programs they fund. Learn about these high-profile influencers from the world of firearms and the shooting sports in their own words.

Kim Rhode started shooting in the NRA Junior Program competing in 22 rifle. With the moving targets, Kim soon fell in love with shotgun shooting and American skeet. After winning the World Championship at age 13, she became captain of the All-American Team. This opened the door to the Olympic style of International Double Trap and International Skeet. She has captured 14 National Championship gold medals since making the National Team in 1995. Her career also comprises of 41 medals in international competitions including six Olympic medals. She is the first U.S. Olympian competing in an individual sport to win six medals in six consecutive Olympic games (1996 Gold in Atlanta, 2000 Bronze in Sydney, 2004 Gold in Athens, 2008 Silver in Beijing, 2012 Gold in London, 2016 Bronze in Rio). Kim’s also the first Olympian to qualify and compete in all three shotgun disciplines: International Double Trap, International Skeet and International Bunker Trap.

How did you get involved in shooting and at what age?
I started dove hunting with my folks in Yuma, Arizona at a very young age. When I was 10 years old I enrolled in an NRA Junior Rifle program shooting .22 rifle at the San Gabriel Valley Gun Club. They also had a program one Saturday each month for kids to shoot skeet for free. Once I got introduced to the moving targets I really started to excel, and that motivated me to begin shooting competitive skeet. 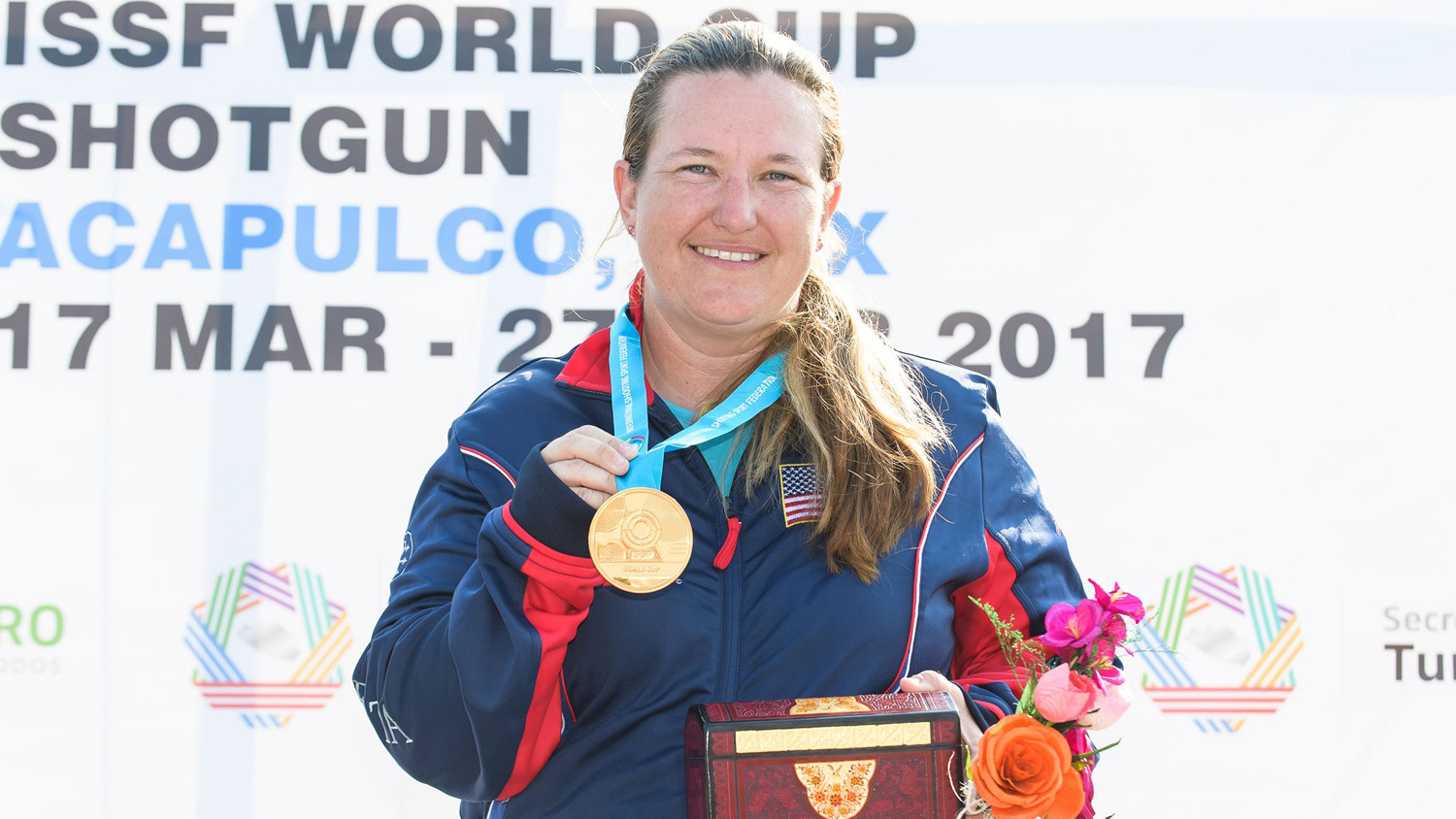 What does being a female athlete and making Olympic history mean to you and how has it influenced your life?
One of the great things about shooting is that your size, your stature don't matter - everyone is on a level playing field. When I started shooting there were not many women, but now there are whole squads of women and there has really been a push in the industry to get more women involved. I’m excited to see how we now have companies offering women’s clothing and apparel, guns for women and events for whole families.

Friends of NRA is celebrating 25 years of fundraising in 2017. How has that program and grants from The NRA Foundation impacted you?
I got my start in that NRA Junior Rifle program. Additionally, without the NRA and The NRA Foundation’s efforts to promote the shooting sports, we wouldn’t have as many women and kids participating in them today. I see the results of The NRA Foundation’s work every day. 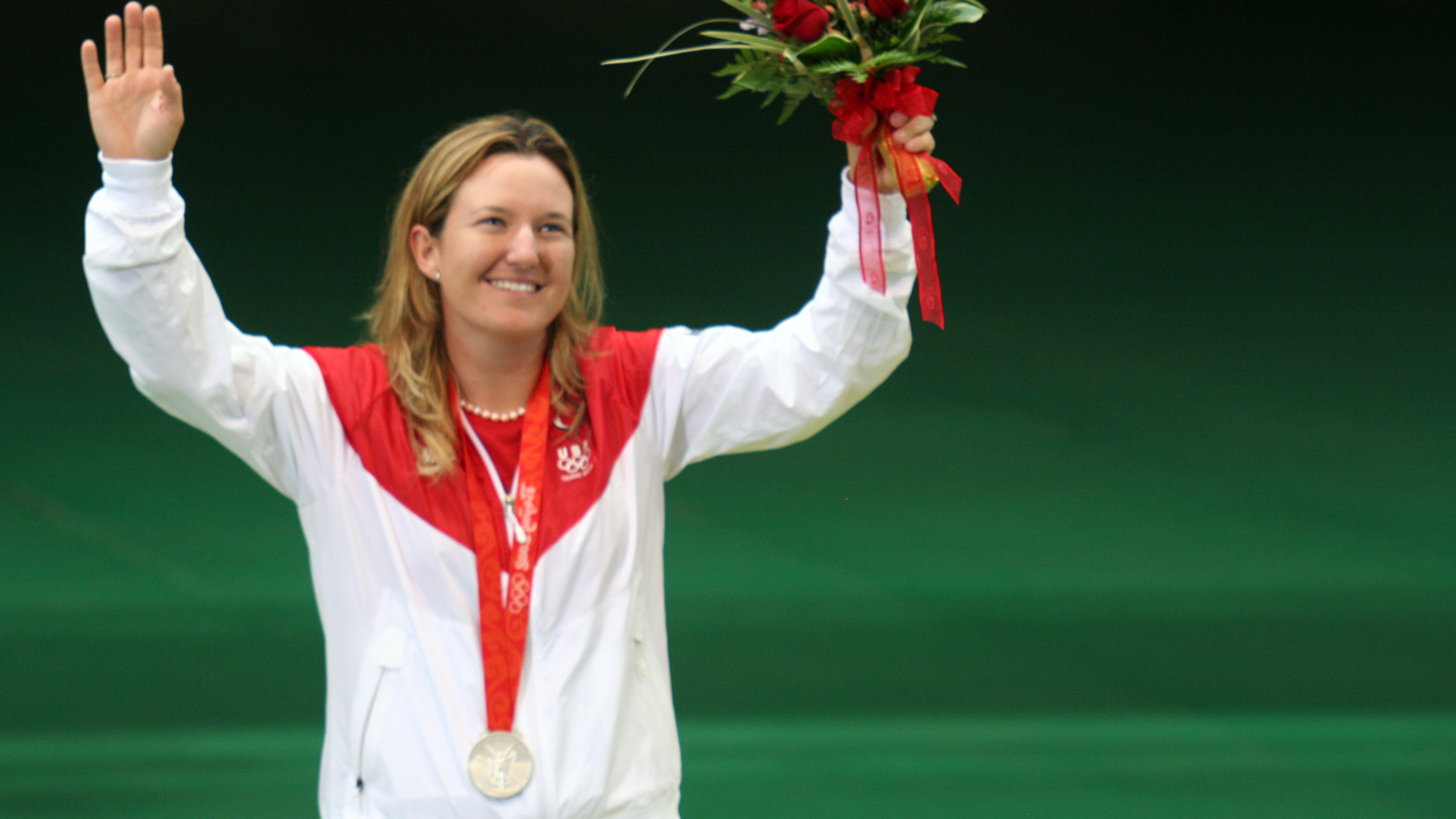 Looking ahead, where do you see the future of the shooting sports?
Looking to the future I think we have many challenges and hurdles to face, but shooting is a part of our heritage that should and can be passed on from generation to generation. It is a cherished tradition in the United States.

What is your favorite type of gun to shoot?
My favorite gun to shoot in competition is an over/under shotgun. I practice between 500 and 1,000 rounds a day, and the over/under has the best reliability.

What hobbies do you have outside of shooting?
I restore antique cars - Ford Model A’s and Model T’s. I also collect first edition children’s books, and I love to cook!

What is on your bucket list that you have yet to tackle?
I haven’t been bungee jumping yet!

Out of all your life accomplishments, which stands out to you the most?
My son is my greatest accomplishment. He just turned four, and I am so proud of him. I am looking forward to sharing my love of shooting and the outdoors with him.

If you could meet anyone in the world, past or present, who would it be and what would you ask them?
I recently have been researching my family history and building my family tree. During this process I have found many interesting people, but if I had to pick one it would be my second great grandfather George Gottlieb Rhode. At the age of 19 he enlisted in the U.S. Cavalry. He was in the 1873 Yellowstone expedition, the 1874 Red Cloud expedition, 1875 Black Hills expedition, and the 1876 great battle against Sitting Bull. A week before the Custer massacre, he was one of 25 men hand-picked from the Second Cavalry under Lt. Sibelly to try to save General Custer at the battle of Little Big Horn. He later became a judge, ran for state senate, and owned a hotel (the Ranchman’s Hotel) and saloon owner. I’m fascinated by my ancestry and would have tons of questions for him.

What is your favorite quote and why?
“Our Olympic Medals are like a pie and many people have a slice.”

I love this quote because it reminds people that we don’t get there on our own. It takes a lot of support from a lot of people to achieve your dream, whatever it may be.