Making Waves for the Shooting Sports 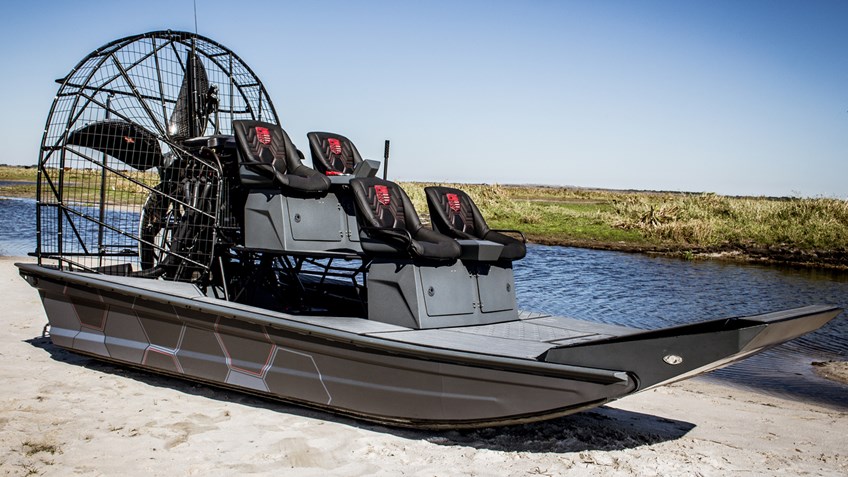 Diamondback has been making waves in the airboat industry for decades and now is growing a firearms outfit to match. Owner Bobby Fleckinger is eager to take on the challenge of guiding his multifaceted operation into the future while supporting The NRA Foundation and the American outdoors and shooting sports traditions they share.

Located in Cocoa, Florida, Diamondback America’s operation grew out of the airboat company that Fleckinger started in November of 1989. Building on that solid foundation, Diamondback has become an extensive and broadly capable facility producing a wide variety of custom and stock items far beyond airboats, including firearms used to fundraise at Friends of NRA events around the country.

From manufacturing marine products, crane bodies, and just about anything made of metal, the Diamondback family of companies expanded to include Diamondback Wake Products and Diamondback CNC.
We always look at it as building something special, whether it’s a firearm, an airboat or anything else
“I like challenges,” says Fleckinger, who started working for an airboat company straight out of high school and proceeded to buy it soon after, jumping into entrepreneurship with the help of his mother. “I think if there weren’t challenges I would lose interest, but there always are and that’s why we do so many different things.”

Prompted by a discussion with an airboat customer and avid alligator hunter about the shortage of modern sporting rifles options available, Diamondback Firearms was added to the company family in 2009 with the debut of a micro compact pistol.

“We were actually machining parts for other firearm companies in 2007, manufacturing uppers, sights and other parts for everybody else,” Fleckinger explains. “So we decided to do it for ourselves and set out to do a pistol. It took about two years to get the first pistol out, and now we do it a lot faster.”

The Diamondback line has expanded to encompass a wide range of all-American made firearms including AR-style rifles like the DB15300B available to Friends of NRA events through the Vendor Direct program.

Diamondback and Friends of NRA have been building a valuable relationship in service to America’s shooting sports traditions and enthusiasts since 2012. After Diamondback Firearms became involved with Friends of NRA in 2013 as a Vendor Direct firearms supplier, Diamondback Airboats joined in by donating a custom airboat to the 2014 National NRA Foundation Banquet.

“We really pick and choose carefully what we donate each year and want to make sure it goes to a good cause,” notes Fleckinger. “We’re very motivated to work with The NRA Foundation, and everything we’ve done with them we’ve been really happy with and where the money goes. The importance to us with this partnership is the safety and education. We get credit for the boats but The NRA Foundation does the hard work behind the scenes to make sure this is around for the future of our youngsters.”

Ensuring that future is a personal investment for Fleckinger. “I have a five year old son who wants to hunt and shoot and fish,” he shares, “and he’s going to be raised around the shooting sports and the outdoor industry in general.”
We really pick and choose carefully what we donate each year and want to make sure it goes to a good cause
This year the joint efforts to support those legacies continued with Diamondback’s donation of another custom airboat, which was auctioned off and brought the combined total raised by both airboats to more than $130,000 to benefit The NRA Foundation. “We set out to create a truly unique and amazing design to embody the spirit of the NRA,” Fleckinger explains. “We were immensely proud to be able to offer this airboat to a lucky bidder in a way that empowers The NRA Foundation to continue building a bright future for the shooting sports in our country.”

If there is one word to describe Fleckinger’s feelings towards Diamondback and the culture that he has fostered there, it would be pride. “We always look at it as building something special, whether it’s a firearm, an airboat or anything else,” he says. “Every person we have in that shop who puts their hands on it has pride in it. We’re just proud to make stuff and keep our talented team busy. Diamondback is incredibly proud of our team of people. We are proud to be American made and proud to do what we do in the United States.”

We want to thank Diamondback and its staff for all the support they provide The NRA Foundation as an American company providing an American product for use at our national and local events. Their commitment to The NRA Foundation, the National Rifle Association, and Second Amendment supporters across our great nation helps us continue our mission to Teach Freedom.