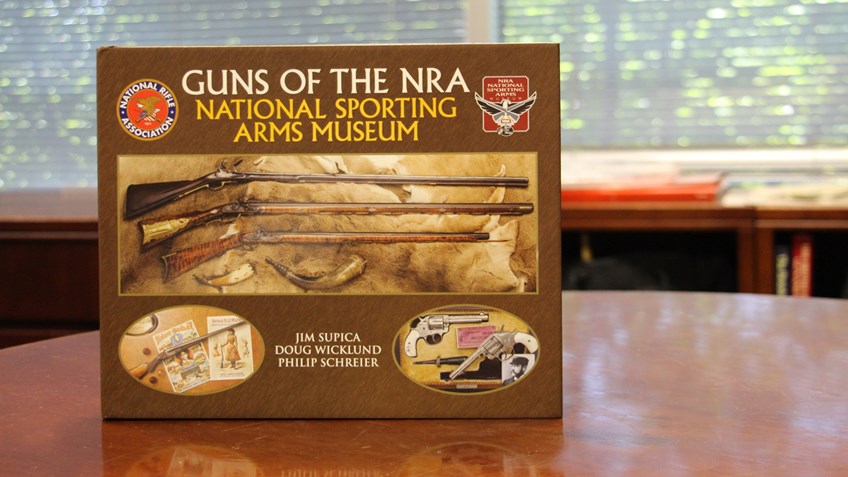 Over 1,000 firearms from the museum are featured in the book illustrating the museum’s theme of hunting, conservation, and freedom.

The Hunting section features the Timeline of Sporting Arms in America, from the earliest muzzle-loaders of explorers and settlers, through Kentucky rifles, buffalo rifles, and the great classic American hunting arms; continuing through the most popular modern firearms of today. The Conservation story is framed with guns of Theodore Roosevelt and his friends and family, and Freedom is represented by a comprehensive presentation of the earliest U.S. marital sidearms and a glorious “21 Gun Salute to America’s Armed Forces,” from Revolutionary War flintlocks through the latest issue.
Guns belonging
to prominent individuals
abound.
The Remington Factory Collection chapter features one-of-a-kind guns from America’s oldest firearms manufacturer, including the .45 ACP pistol that nearly replaced the U.S. 1911, prototypes that never saw production, factory cutaways, and both the first and the ten millionth Remington 870 shotgun. It also includes famous original oil paintings of adventure and hunting scenes used in advertising in the early 20th century.

The chapter on Hollywood’s version of the Old West stars Tom Selleck’s Sharps rifle from Quigley Down Under, John Wayne’s True Grit guns, Marshal Matt Dillon’s Gunsmoke Colt, and other smokepoles used on celluloid by Jack Palance, Robert Carradine, Mel Gibson, Steve McQueen, and other silver screen legends.
The beautiful
and the bizarre
are also well represented.
The beautiful and the bizarre are also well represented. Elegant arms include masterpieces of the gunmaker’s art from the Pachmayr Foundation, engraved guns of the Old West, and extraordinary Holland & Holland “elephant gun” double rifles in .600 and .700 Nitro Express. Oddities from the Thurston collection include a four-shot double barrel percussion shotgun (superposed loads) and strange early revolving rifles; shown alongside finest quality sporting arms and rare antiques such as an Officer’s Model Trapdoor, iron frame Henry, and the only 19th century octagon barrel Colt Buntline Special.

This striking new museum; the vision of Bass Pro’s Johnny Morris, Richard Childress, and Wayne LaPierre; has quickly become the most visited firearms museum in the country. It’s now available in book form.

Gun of the NRA National Sporting Arms Museum was written by Jim Supica, Doug Wicklund, Philip Schreier and other NRA Museums staff members and is available for purchase at the NRAstore – get your copy today!