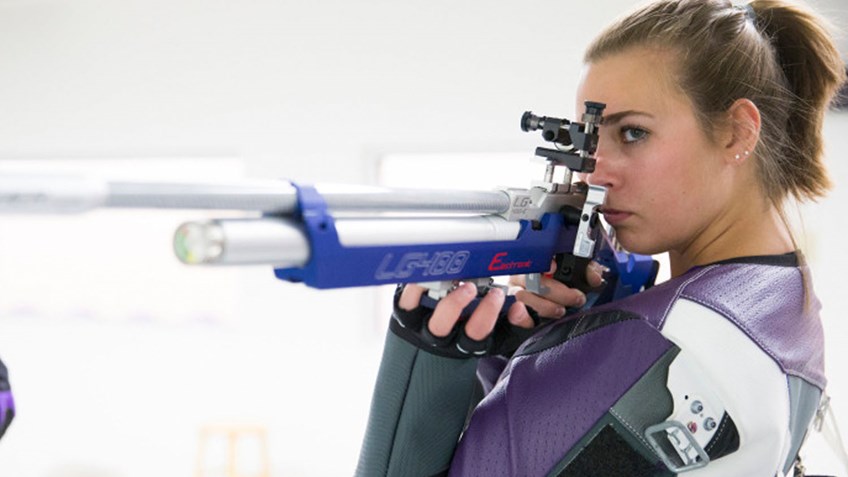 The NCAA Rifle Championships are just days away, scheduled for March 10 and 11 at The Ohio State University in Columbus, Ohio. The Buckeye State welcomes the nation’s best 48 collegiate shooters from across the country for two days of competition, culminating in the crowning of team and individual champions.

Of the 29 eligible NCAA Rifle programs in the U.S., the top eight teams will square off in Columbus, with eight individual qualifiers from schools whose team did not qualify for the championships.

Since the introduction of the NCAA Rifle Championships in 1980, two programs have dominated the field. The University of Alaska Fairbanks has earned 10 titles, while the reigning champion Mountaineers of West Virginia University have won 18 NCAA National Championships, including the last four straight.

This year, these five schools sit atop the standings, all looking ahead to capturing the trophy and earning the rights to the name “champion.”

1. Texas Christian University (TCU)
The Horned Frogs of TCU, one of the nation’s only women-only squads, are heading to their 11th consecutive NCAA Rifle Championships. The team concluded the most impressive regular season in the program’s history, finishing with a 13-0 record and winning its second-straight Patriot Rifle Conference Championship. With all-star years from Ariana Grabowski in smallbore and NCAA-leading Mindy Miles in air rifle, the Horned Frogs look destined for greatness.

2. West Virginia University (WVU)
The Mountaineers return to the NCAA Rifle Championships looking to take home their fifth consecutive NCAA National Championship. Coming off a conference-best 12th Great American Rifle Conference title, WVU hopes to continue their winning ways in Ohio. The Mountaineers are perennially rich with talent, as witnessed by their historic dominance, and with shooters including Olympic gold medalist and GARC Shooter of the Year Ginny Thrasher and GARC Rookie of the Year Milica Babic, West Virginia presents the biggest threat to TCU for this year’s title.

4. Air Force Academy (USAFA)
The cadets of the U.S. Air Force Academy make their fourth trip to the NCAA Rifle Championships under head coach Launi Meili, hoping to bring the trophy back to Colorado Springs this year. Their fourth-place ranking mirrors their performance from 2016, and represents their fourth-straight year in the top eight. The Falcons finished a record-setting season with standout shooting from senior Ryan Jacobs and sophomore Anna Weilbacher, who join second-year student-athletes Spencer Cap and Nick Learn, and freshman Logan Ogden to round out the USAFA squad headed to Columbus.

5. University of Alaska Fairbanks
The Nanooks punched yet another ticket to the NCAA Rifle Championships, vying for their 11th national title. With their last NCAA championship win in 2008, Alaska Fairbanks seeks a return to form against a field filled with talent. The Nanooks’ interim head coach Layne Lewis said “all the schools competing in the championships this year are also shooting really great right now, which will make for some really close matches and a fun and exciting event." After a narrow loss to fellow perennial powerhouse WVU during the NCAA Qualifiers in February in Morgantown, Alaska Fairbanks, led by co-captains Patriot Rifle Conference Smallbore Champion and redshirt senior Soren Butler, and redshirt junior Sagen Maddalena, hope to exact some revenge in Columbus and add another trophy to their packed case.