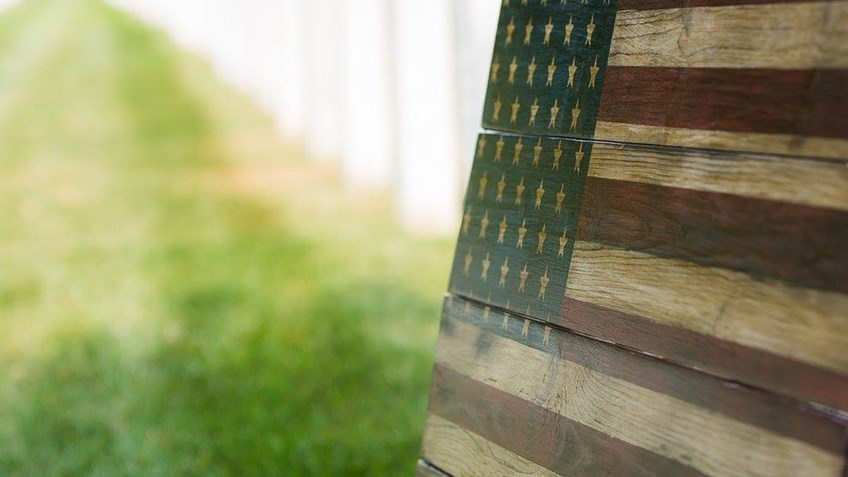 “It’s not only about hiring veterans but hiring those who miss the camaraderie and that brotherhood,” said Brian Steorts Owner and Founder of Flags of Valor (FOV). Flags of Valor, based out of Ashburn, Virginia, is a veteran-owned, combat veteran-made Americana woodwork company molded by three ideals: “Made in America” still matters, employing and empowering veterans and giving back to the community.

Steorts started the business just over a year ago in October of 2015 when he was recovering from a non-combat related injury he sustained in Afghanistan. However, to share FOV's journey, we have to start with Brian's.

Brian became a U.S. Army Paratrooper and was assigned to the esteemed 82nd Airborne stationed at Fort Bragg in Fayetteville, North Carolina. After serving three years in the Army, Brian attended college using benefits from the G.I. Bill where he earned a degree in business. It was shortly after where he felt obligated to serve once again. 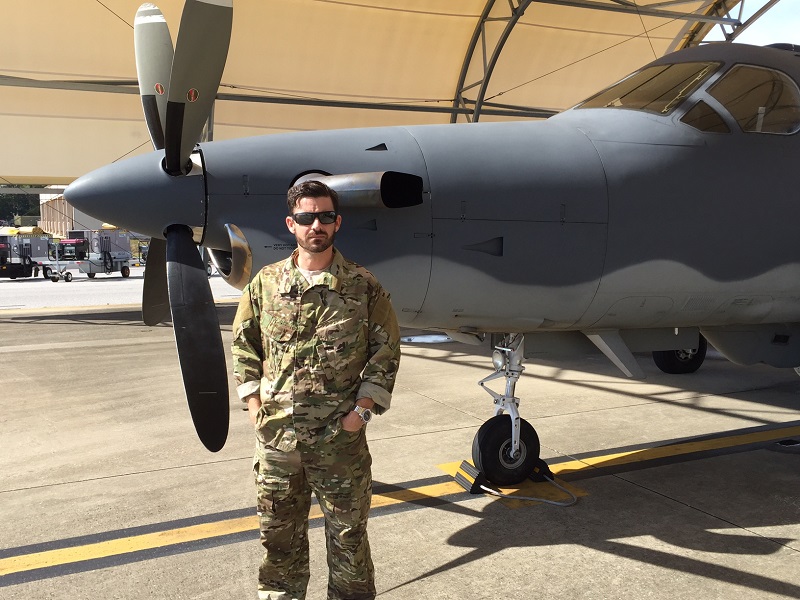 “During college, September 11 happened and like most Americans I was very upset. I came from a family who had all served in combat and I had not so I felt like I had an unfinished chapter in my book,” he explained. “I decided I wanted to fly. I wanted to try to be a pilot so I joined the Air Force. I was commissioned in 2005 where I then got to join Air Force Special Operations Command.”

As an AFSOC pilot, he supported ground forces by flying a U-28 Intelligence, Surveillance and Reconnaissance (ISR) aircraft. He provided intelligence, surveillance, and reconnaissance to help outsmart, outmaneuver and outfight the enemy. After serving nine deployments, he officially retired in January of 2016. When he returned from his final deployment, Brian decided he wanted to start a business.

“Because I was going through rehabilitation I didn't wear my uniform anymore, and I always had a flag on my shoulder before that,” he shared. He began searching for ways to fill that void while out of uniform and “found a flag" he liked online.

"It was a wooden flag, and it was beautiful," Brian continued. "But I found out it wasn't made in the United States, and of course that upset me. So then I decided, ‘why not try to make my own?’” 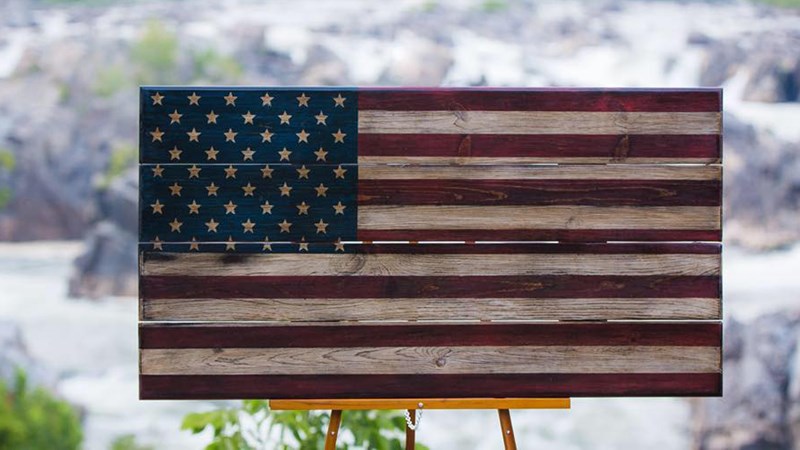 Despite having no prior woodworking experience, he found craftsmanship therapeutic. Fortunately, the appropriate tools had been passed down to Brian from his father, allowing for a beginning as humble as the man.

After donating several flags to families of fallen Explosive Ordinance Disposal (EOD) service members, he realized there was a lot more work to be done. Brian made it his mission to find combat veterans who were willing to work with him.

“I wanted to surround myself with people who were exemplary and they all found me one way or another,” he explained.

All flag makers at the company are combat veterans, but many of them didn't have carpentry experience, so Brian took them under his wing. He began training his growing staff as they came in to give them the foundation they needed.

“We are very old school. We do everything by hand. From selecting the wood, to sanding, cutting, routing, painting, distressing and finally sealing, there is no automation; no machine takes that piece of wood and turns it into a flag,” he explained. 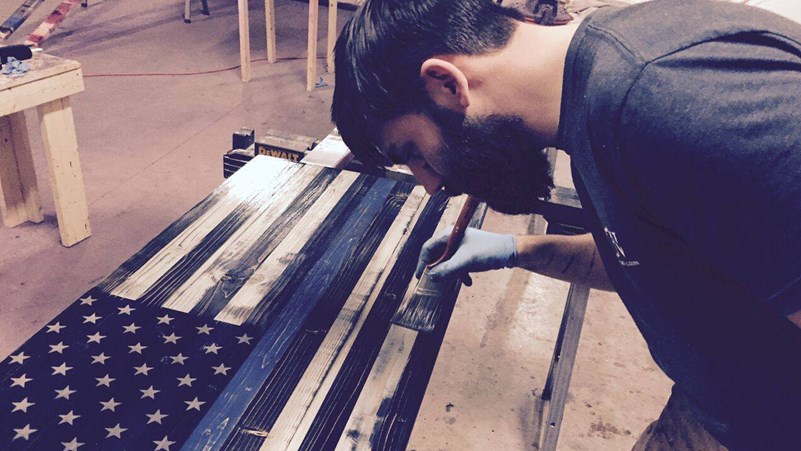 Every item utilized by FOV is made in the U.S.A. -- something they take extreme pride in. They source everything locally, from boxes and crates to the tools they use every day. With their domestic devotion in mind, they reached out to 20 U.S. companies hoping to start a working friendship among businesses. Stanley Black & Decker was the only company who got back to FOV. Not only did Stanley Black & Decker respond, but they donated numerous DeWalt tools from their “Made in U.S.A.” line.

They began to grow the business through point of sale and e-commerce with four combat veteran craftsmen. Brian participated in various gun shows in hopes of expanding his company, and it didn't take him long to hit a turning point that would change their company forever.

“When we were at one of the charity events in D.C., a lady there who was a director of the Republican National Convention asked if we wanted to be a vendor at the RNC,” Brian said. “She explained only 22 vendors are allowed to participate, so of course we said yes! I went on Fox and Friends and Fox Business the following Monday, and our company grew overnight.”

Because of that single opportunity, they were able to hire more veterans to meet the incredible demand.

“We had a long backorder but everyone understood because they knew the story from the interviews on TV and were like, ‘Hey we don’t care how long it takes, as long as we get one,’ and those people just bought right there on the spot,” he explained. “We weren't going to sacrifice the quality of our handmade product by rushing through all of the orders.”

Brian's vision to build a company was blossoming and his craftsmen were following the same track. FOV’s team includes veterans from each branch of the U.S. military, the lone exception being the U.S. Coast Guard (for now). 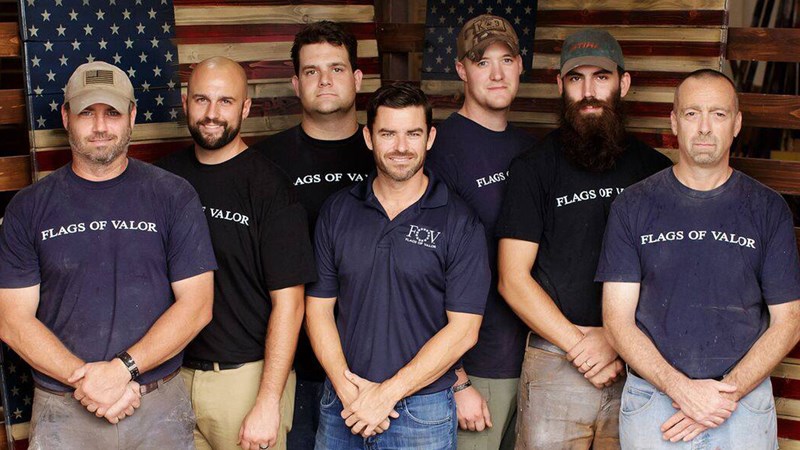 “From everyday issues to getting through injuries they’ve sustained, [FOV] has helped a lot of them in many ways that you can’t measure," said Brian.

Giving back to the team at FOV is just one of many ways the company contributes to other veterans. They spend a lot of time and effort working with foundations such as Special Operations Warrior Foundation Luke’s Wings, Officer Down Memorial Page, C.O.P.S. and the Navy S.E.A.L. Foundation. The group consistently gives to charities by donating flags to live auctions. Their last 10 flags alone raised $120,000.

“It’s very rewarding to present a flag made by our team, we know what it means to us and what it means to them,” Brian said humbly. “Who better to give to than someone who has worn it on his or her sleeve? It’s a feeling you can’t buy.”

This year Flags of Valor entered a new partnership with Friends of NRA through its Vendor Direct Program. They've also donated pieces to Friends of NRA banquets along with other NRA related events.

Helping an organization that strongly supports the U.S. military and veterans hits home with Brian.

“We’re all [NRA] Life Members,” he said. “Donating our flags to their events is just one more organization that we can create friendships with and support.”

Hardly a year old, Brian’s business has already doubled in size. He's aiming to hire 10 more veterans this year and maintains a goal to diversify their product line and increase the amount of veterans they employ.


To learn more about Flags of Valor visit their website at www.flagsofvalor.com.

All photos courtesy of Flags of Valor.