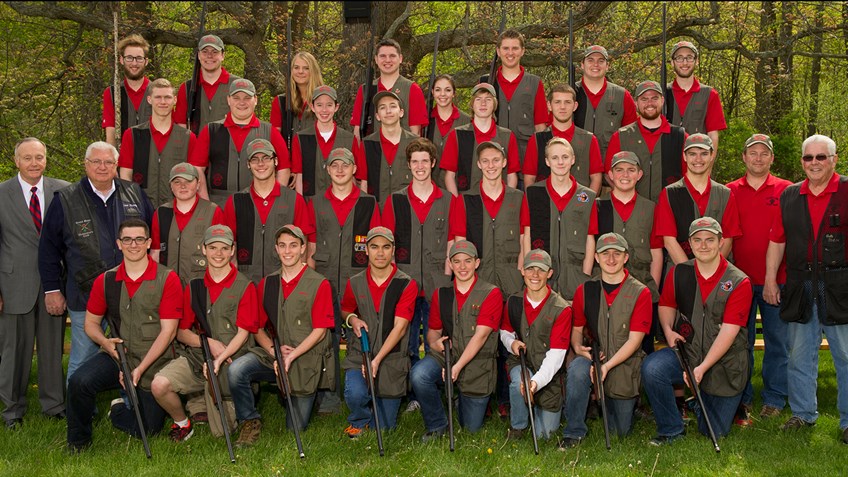 In 2010, an eager group of nine high schoolers came together with a goal in mind – to start their own skeet team.

The students teamed up with coaches Dale Statson and Cameron Henke, who combined their efforts to approach the board of education to make their team official. To their dismay, the decision was ruled out by the principal.

They were told, “kids and guns don’t go together."

Without support from the school, Dale and Cameron took matters in to their own hands: they applied for a grant from The NRA Foundation. That first year, they were awarded $5,377 to help acquire essentials for the team.

“We needed everything from shotguns to safety glasses,” said Cameron.

By the second year, interest in the team grew significantly to 24 athletes. With more students joining the team, more volunteers were needed to help ensure things ran smoothly and safely. The NRA came through again, awarding a grant of $5,892 to provide guns, ammunition and supplies for the entire team. The community chipped in as well to help the team with costs for practice and shooting vests.

The coaches reached out to the board of education again with hopes that the growth of the team would persuade their decision. Unfortunately, that was not the case.

When the team entered its third year, they had grown to 32 members, and again applied through NRA’s grant program, receiving $3,601 in support for the season.

Persistence proved to be key. The next appeal the coaches made to the school board for legitimacy, the board agreed, recognizing the team as a club team to be evaluated at the end of the year.

School board members and the athletic director visited practices during the season, officially sanctioning the club as a high school team at year's end. This official endorsement meant students would be recognized as athletes affiliated with the school’s athletic program and earn a varsity letter.

To top things off, the students earned honors as the top high school team at the SCTP Michigan State Shoot that same year.

The Grand Blanc Skeet Team continued to succeed in the shooting sports, sending a teammate to compete at the state and national levels over the following two years.

The team “continues to be looked at by the school as a success both in numbers as well as a model for safety and respect,” shared Cameron -- something they're incredibly proud of.

The NRA Foundation provides financial support around the country to eligible projects, programs and organizations through its Grant Program. These funds help make it possible for those like Grand Blanc Skeet Team to participate and excel in the shooting sports. Since 2010, Grand Blanc Skeet Team has received over $30,000 from NRA’s Grant Program to help them compete and succeed.

The team is looking forward to another successful season, “thanks to the NRA.”

“All of this would never have been possible without the generous grants received by The NRA Foundation,” said Cameron. “The grants have enabled us to grow our team as well as our outreach to the school and community.”

Each year, volunteer committees from across the country tirelessly raise charitable dollars and generous donors make gifts that are in turn awarded as grants in support of educational and public service programs relating to the shooting sports in our communities. These grants are essential for the future of shooting sports. Learn how to contribute to The NRA Foundation or apply for a grant and bring the shooting sports to your community today.