More
SUBSCRIBE
After spending more than 4 years waking up in Iraq, Evan Hafer now wakes up to the dark silence of his Salt Lake City neighborhood. Before anyone else rises, he’s, raised his heart rate and made himself a cup of coffee better than anything most of us will ever taste. That’s because Hafer knows coffee, he knows coffee like he himself was grown and nurtured as a coffee bean.

As a youngster, Hafer grew up smelling the malted leather and pastry-like aromas of his father and grandfather’s coffee. But it wasn’t until high school that Hafer grew fond of the taste for the brew. His passion for coffee beans came later, when he dated a barista who really turned him onto great coffee. 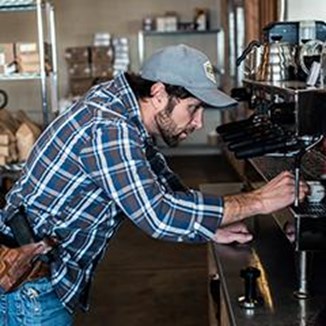 SORTING
As Hafer dives into the last bit of his morning routine, checking and answering emails, he won’t get too far when two small hands reach for him. His two year old daughter is awake, she knows the smell of brewing coffee means morning. She also knows it’s a drink only for mommy and daddy and not yet for her. “I’ll make breakfast for us both – usually two eggs for me and French toast for her.”  But life wasn’t always this way for the Veteran and father.

“At 20 years old I was consumed with the desire to serve my country…” a desire that drove him to join the Washington National Guard after high school and the same desire that pushed him into becoming a Green Beret. After joining the Special Forces, Hafer would spend more than 20 years serving the United States - either with the Guard, on active duty or as a contractor for the government. He racked up more than 40 deployments all over the world, serving in places like Southeast Asia, Kuwait and Iraq, but never without roasting about ten pounds of coffee beans first, to accompany him on his missions overseas. “I roasted the coffee for my trips because the coffee I roasted was so much better than anything I could buy or ship to myself. Although, we had an interpreter in Iraq that could make a mean Turkish coffee.”

ROASTING
“I left government service in December of 2015. I was very ready to make the transition to work for myself,” explained Hafer. And that is exactly what he did. It wasn’t hard for him to figure out what he wanted to do after retiring from the military. He took the things he loved, our country and coffee, and established Black Rifle Coffee Company.

“I created Black Rifle Coffee Company for people like myself, coffee-loving veterans and those who are committed to supporting the 2nd Amendment. I wanted to create a company that roasted the finest, freshest coffee on the planet that also supported the things ‘we’ believe in.  I consider myself the ‘custodian of my tribes’ dollars and I take that role very seriously.”

COOLING
Six veterans make up Black Rifle Coffee Company (BRCC). The company dynamic is less about being serious and much more about having fun. “My favorite part of the day is working with roasts, making coffee and hanging out with the guys. This is the greatest job on earth.” Doing what you love and with the people who’ve become your second family - who could argue? 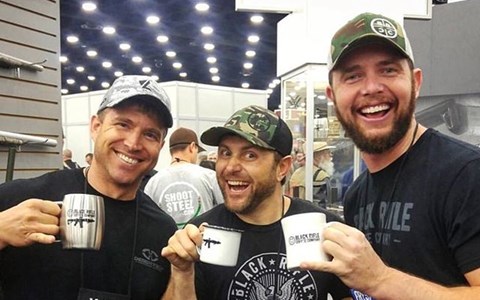 Hafer and his team have many different types of roasts each creatively matched with a specific black rifle. “There has not been a lot of science to this in the past, other then what I think.  However, we are writing a series of stories on how to pair rifles with coffee.”

Not only do they spend time making their products unique but they love to film content, mostly commercials, for BRCC. It’s not to say that the company hasn’t been met with opposition, but it’s hardly effected Hafer, and his outlook on the business. “People do think we are offensive. [But], I tell them to vote with their dollars and buy someone else’s product. I’m very open about that.”

Despite those who may dislike the company, it’s hard to argue with the work they’ve done, and the work they do. Hafer, and BRCC, are committed to giving back. “I support firearms related causes, military causes and law enforcement causes.  We donate to the Fraternal Order of Police, The Raider Project and are always looking for pro-second amendment/non-profit groups to work with.” Donating over 40k to these non-profits in the past few years is something Hafer takes seriously.

Hafer’s interest in giving back to firearms related causes not only stems from the time he spent serving his country, but because it hits close to home. “My grandfather taught me to shoot probably before I could walk, and my father, he purchased my first rifle before I was even born.” The love for coffee wasn’t the only thing they passed down to him.

PACKAGING
If Hafer’s extensive curriculum vitae serving his country and being one of the best coffee roasters around isn’t enough, he can add movies too. “Being part of the Range 15 movie was amazing. [I met] Medal of Honor recipients Clint Romesha and Leroy Petry, [it] was just incredible!” boasted Hafer.

Black Rifle Coffee Company may only be two years old, but if Hafer’s story dictates anything, there’s no signs of slowing down.