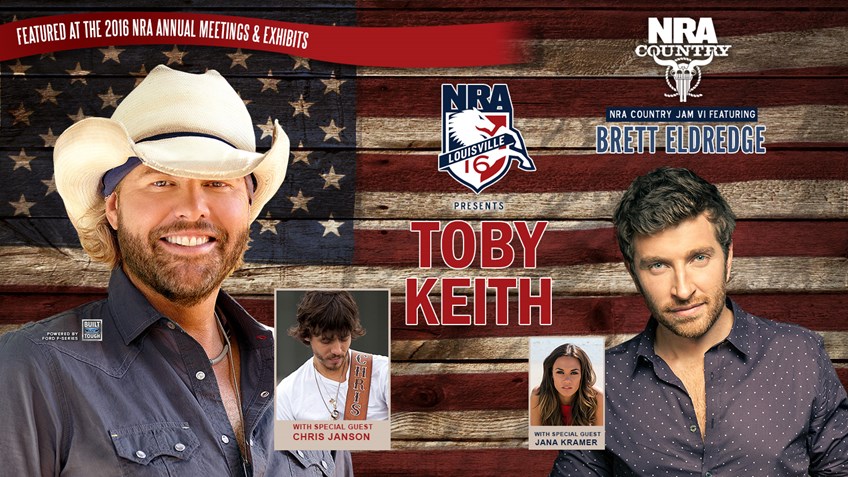 More
SUBSCRIBE
It's that time of year again! The 145th NRA Annual Meetings and Exhibits are right around the corner! We are happy to announce this year's headline musical guest and NRA Country Jam VI!

Stay up-to-date with all the latest NRA Annual Meetings news by liking us on Facebook or following us on Twitter!

UPDATE: Chris Janson will be joining Toby Keith for the Saturday Night Event!


Country music superstar Toby Keith’s tours have drawn more than one million fans each year for the last decade. His fame is bolstered by patriotic songs like "American Soldier," "Courtesy of the Red, White and Blue," "Beer for My Horses," and others that resonate with blue-collar, freedom-loving Americans. So there's no act more befitting NRA's epic night of live music on Saturday, May 21-a day better known as Armed Forces Day. That's right, legendary country music star Toby Keith will perform live in concert to celebrate our Second Amendment freedom-and our troops-in one glorious springtime evening event in downtown Louisville at the KFC Yum! Center Arena. This Red White and Blue epic concert is sure to sell out, so don't wait to pull the trigger! Tickets start at $20 and will go on sale the week of April 11, 2016 via Ticketmaster. For more information and updates, visit: www.nraam.org

NRA Country Jam VI
Featuring Brett Eldredge with Special Guest Jana Kramer
Friday, May 20, 2016
Doors Open 6PM
The Belvedere at Louisville Waterfront Park
Louisville, KY
Live country music is on tap Friday night when NRA Country Jam VI, featuring Brett Eldredge and Jana Kramer, pours from Louisville’s Belvedere at Waterfront Park.One of the hottest country artists of 2016, ACM Male Vocalist of the Year nominee, Eldredge (“Don’t Ya,” “Beat of the Music,” “Mean to Me”) headlines the annual Jam amid a national tour and a fun new single called “Drunk on Your Love.”Setting the mood as the sun sets atop the Ohio River, the beautiful and multi-talented actress and country starlet Jana Kramer will delight fans with hits including “I Got the Boy,” “Whiskey,” and “Why Ya Wanna.” Kramer won the ACM’s Top New Female Vocalist in 2013 and is nominated for this year’s Female Vocalist of the Year title.NRA Country Jam has quickly become the draw for NRA’s good time crowd, and this year’s Jam promises the same. The Belvedere at Waterfront Park is an outdoor venue with plenty of parking and room for dancing, so come on out for an NRA Country night to remember! Best yet, as a thank you to NRA Members, this one is on us: That’s right, NRA Country Jam VI is free of charge! For more information and updates, visit www.nracountry.com and www.nraam.org