What Is Your State’s Gun? 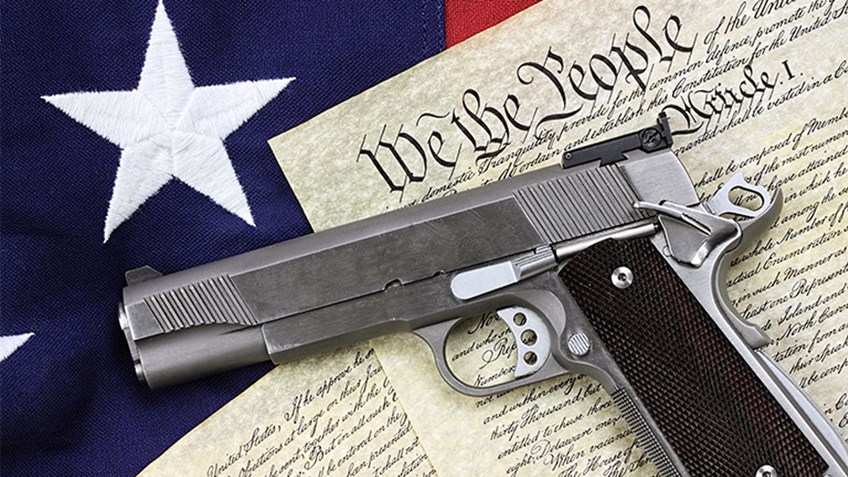 More
SUBSCRIBE
Did you know there are only 7 states in the U.S. with official state guns? We were shocked as well. So, we thought it would be fun to find guns for all 50 states! Take a look at the firearms we picked and let us know which gun you would choose for your state! Click on each gun to learn more about it.

Remington recently began production in Huntsville and with miles of deer hunting land, this bolt-action rifle is a great pick for Alabama.

This rifle belonging to The Rifleman also helped Alaskans "establish a firm foothold" in the wilderness between 1930 and 1963. 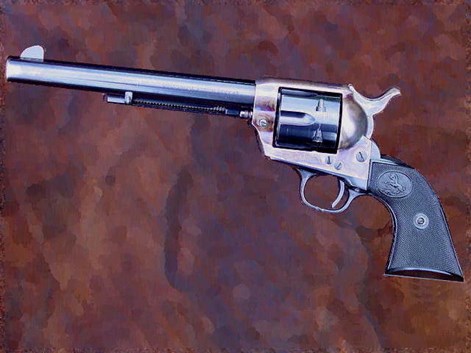 Arizona residents was surveyed on what the "Old West" firearm should be resulting in it's official state firearm, The Colt Patent Firearms Single Action Army aka "The Gun That Won the West”. Arizona is the 2nd state to have an official firearm.

Arkansas gets this Coly Army Model 1860 that was owned by the “Man in Black” himself as he was born in Kingsland, Arkansas! 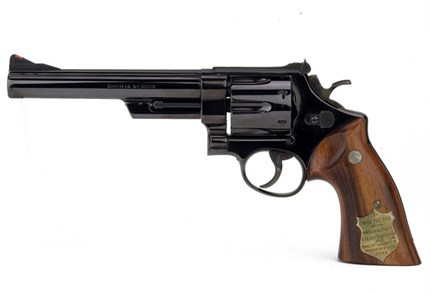 California is the home of Hollywood, where many major motion pictures have come to life. This gun is iconic because when Dirty Harry made its debut on Dec 23, 1971, the world clamored the 6.5" Model 29, creating a sensation that lasted for years. Fun Fact: Dirty Harry was also filmed in San Francisco!

Since Colorado is known as one of the most popular U.S. elk hunting destinations, we’ve given it the Winchester M7- Super Grade, a great rifle for hunting elk! 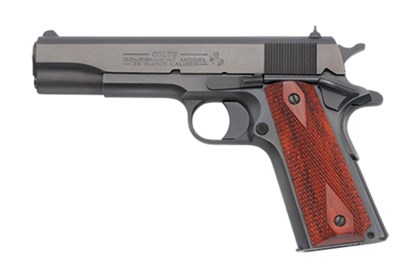 Connecticut is the home of Colt, one of the oldest firearms manufactures in the U.S. the Colt 1991 is a direct descendant of the original Colt M1911, which is an iconic American pistol. 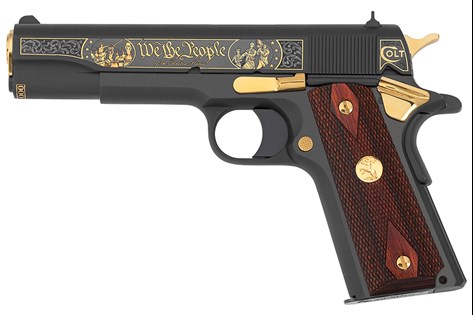 Delaware was the first state to ratify the Constitution on December 7, 1787. This gun even features the famous scene of George Washington crossing the Delaware River! 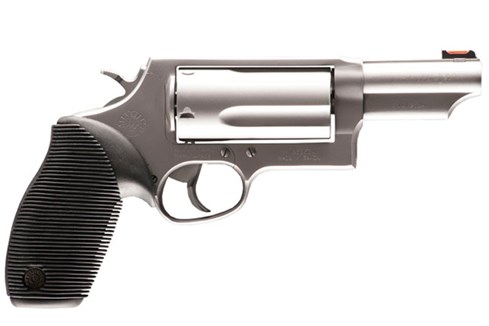 Florida is home to Taurus Holdings Inc. and as one of Taurus’ most popular firearms, The Judge seemed like a great choice.

Georgia is a great destination for quail hunting! Albany has even been called the “quail hunting capital of the world” and the Browning Citori Superlight Feather makes an excellent choice for upland bird. 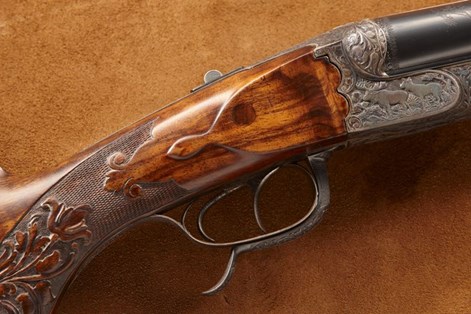 President Theodore Roosevelt established the Caribou National Forest in 1907 which now covers more than 1 million acres in southeast Idaho. This This Adolph double rifle bears the Presidential seal on both barrels and is attributed to use by Roosevelt on western hunting excursions.

This rifle was specially made for the President himself, who was born in Illinois!

This rifle is the official state gun of Indiana. It was crafted by Indiana's first sheriff, who also designed the state seal.

Born in Iowa, Hollywood icon John Wayne is a stellar standout from his popular western movies. The Winchester Model 1892 was a favorite of Wayne's and used in some of his movies such as Hondo (1953), McLintock! (1963) and Big Jake (1971).

Kansas is widely known for pheasant hunting and the Affinity Compact adjusts to fit anyone's size - perfect for everyone to enjoy the hunting season!

Longrifles saw considerable use during the War of 1812, and it was thanks to an 1824 song "The Hunters of Kentucky," that they were dubbed Kentucky rifles.

The popular show Duck Dynasty is filmed in Louisiana where the Robertson clan reside and operate their duck call business Duck Commander.

Maryland is home to Benelli in the U.S. The 828U is one of Benelli’s newest and most popular over and under shotguns!

Massachusetts is home to Springfield Armory. The M1903 "Springfield" bolt-action service rifle was the standard infantry rifle of the American Army throughout its participation in WWI and into WWII. The design of this rifle set the tone for many other bolt-action rifle designs of the time had adopted. It later saw purpose during the Korean and Vietnam wars. 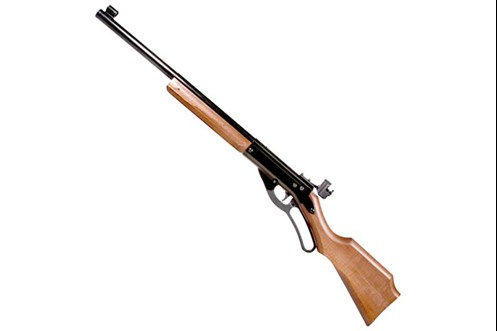 The popular Daisy BB Gun was created in Plymouth, Michigan!

Mississippi troops serving under future Confederate President Jefferson Davis used this rifle quite successfully during the war with Mexico and was given the nickname the "Mississippi Rifle." 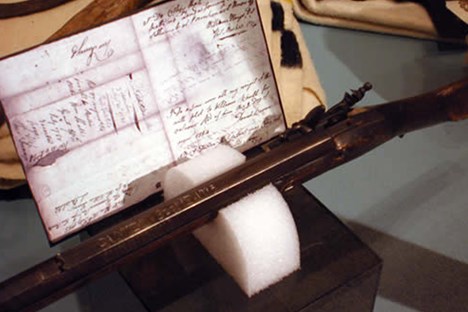 Daniel Boone is remembered as one of the foremost early frontiersmen and pioneer who later in life settled in Missouri. 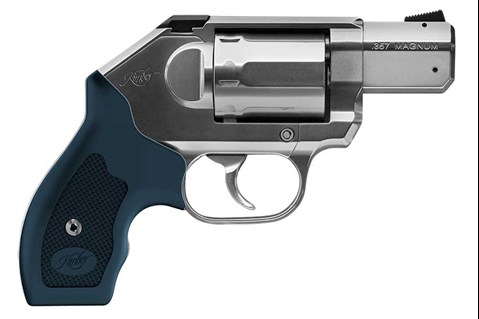 Montana is home to Kimber. Fun Fact: the Kimber revolver is the first for Kimber in their line of handguns!

Nebraska is known as a popular hunting destination for upland bird hunting and the Winchester Model 101 is an excellent choice! 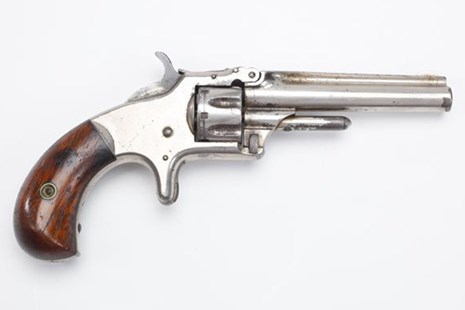 This was the gun carried by Samuel Clemens on his journey to Nevada, where he began his career as a writer and took the pen name Mark Twain. 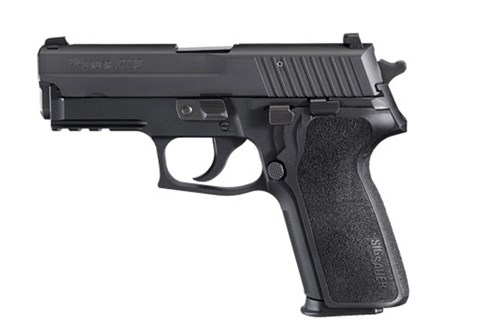 Sig Sauer's stateside manufacturing plant is in Exeter, New Hampshire and the P229 was the first pistol produced there!

New Jersey is home to Henry Repeating Arms and the Henry Golden Boy just happens to be one of their most popular rifles. 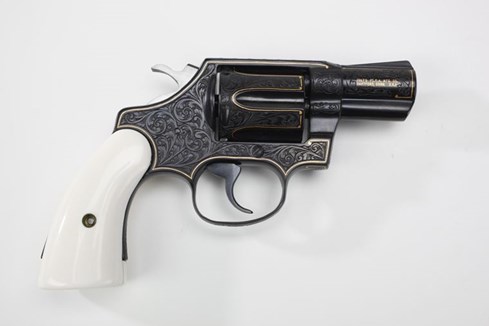 This pistol is seen often at the National Pistol Shooting Championships which is held in Albuquerque! 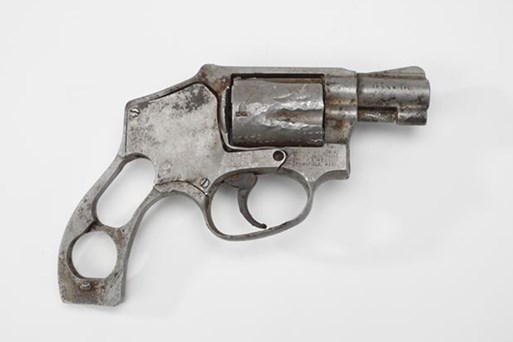 This revolver was recovered from the World Trade Center at the ruins of Ground Zero. It was carried by New York police officer Walter Weaver on September 11, 2001 and is now on display at NRA Museums. 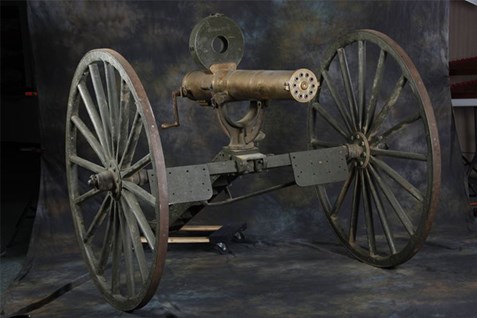 Richard Gatling, inventor of the Gatling Gun, grew up in North Carolina where he became enamored with inventing.

This rifle was used by the U.S. Army during the American Indian War. During the War, the Dakota War of 1862 was the first major armed engagement between the U.S. and the Sioux and took place in North Dakota. 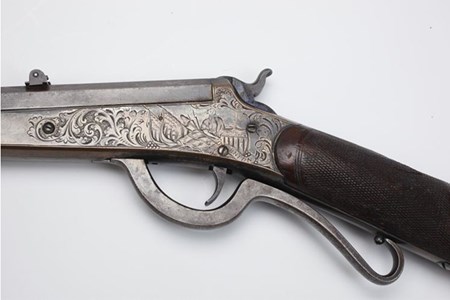 This rifle was famously used by Ohio native Annie Oakley! 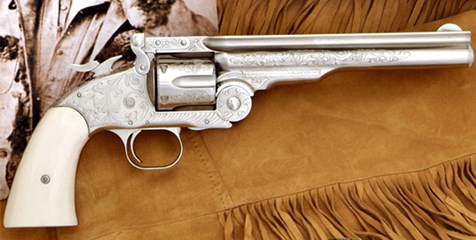 The Smith & Wesson Schofield was named after Major George W. Schofield of the 10th Cavalry and was popular among cowboys in the old west. Fun Fact: The National Cowboy & Western Heritage Museum is located in Oklahoma City!

The M1 Carbine was issued to 555th Parachute Infantry Battalion which was the first all African American airborne unit and based in Oregon.

The Pennsylvania rifle was one of the first commonly used rifles for hunting and warfare and is the official state gun of Pennsylvania. 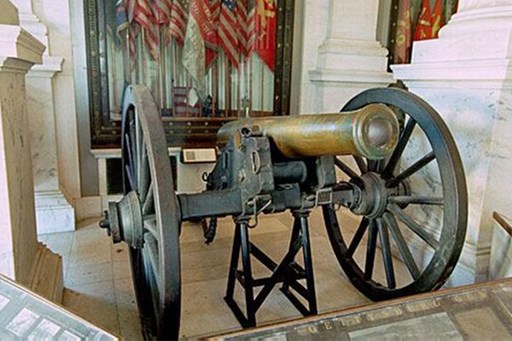 Located in the Rhode Island Statehouse, this cannon also known as the Gettysburg Gun was last fired on the final day of the Battle of Gettysburg by Battery B, 1st Regiment Rhode Island Light Artillery. 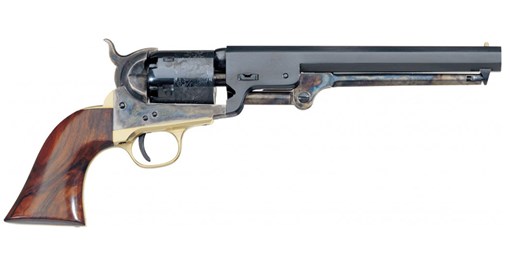 The battle that started the American Civil War took place in April 1861 at Fort Sumter in South Carolina. South Carolina was knowns as a source of troops for the Confederate army which favored this .36 caliber Navy revolver.

Did you know that Vermont is the birthplace of the first interchangeable gun?!  This gun was famously seen in the 1990 Western war film Dances with Wolves. Fun Fact: The movie was filmed primarily in South Dakota!

The Barrett M82 was recently named the official gun of Tennessee, making the Volunteer State the 7th state to have an official gun. 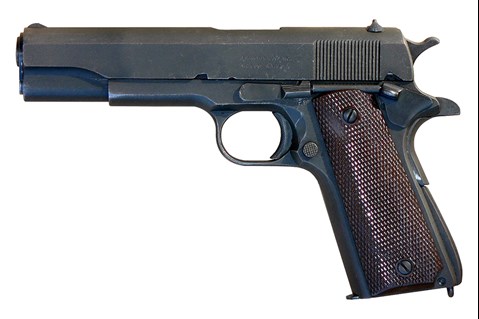 This single action, semi-auto .45ACp pistol was standard issue for the U.S. Armed Forces from 1911 to 1986 and is the official state gun of Utah. 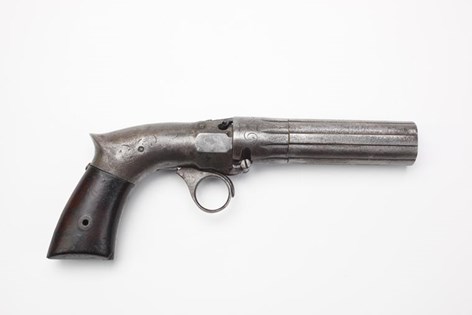 Robbins and Lawrence Armory produced a variety of pepperbox pistols that were extremely popular from 1851 to 1854. The armory was famously known for being one of the firsts to manufacture interchangeable guns and was located in Windsor, Vermont!

Virginia Manufactory of Arms was a state-owned manufacturer in Richmond, VA. From 1803 – 1821, it supplied the Virginia militia with firearms like this flintlock rifle.

Lewis & Clark was the first American expedition to cross what is now the Western portion of the United States. They entered through Washington State, and made the Girardoni-Style Air Rifle popular.

The Hall Rifle is a single-shot breech-loading rifle adopted by the U.S. Army in 1819 and is the official state gun of West Virginia.

While Henry Repeating Arms is headquartered in New Jersey, its manufacturing plant resides in Rice Lake, Wisconsin. They Henry Big Boy is one of Henry’s most recognizable rifles! 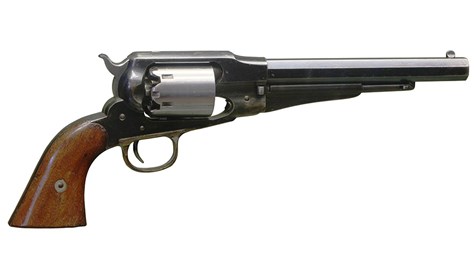 Buffalo Bill was a famous American scout, bison hunter, and showman. One of his favorite guns was this Remington .44 revolver. Fun Fact: The Buffalo Bill Center of the West is located in Cody, Wyoming!
IN THIS ARTICLE
State Guns
More
SUBSCRIBE