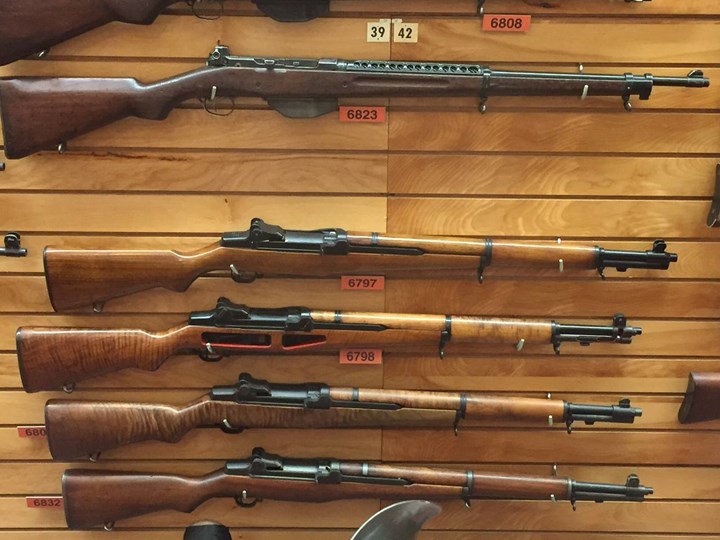 Established in 1905, the Rock Island Arsenal Museum is the second oldest museum in the U.S. Army's museum network. Once named for firearms designer John M. Browning, more than 1,200 firearms are on display and feature historic gems like the M-1903 RIA manufactured serial number 1 with the rare rod bayonet, M1 Garand serial number 2, the first RIA-made M15 General Officers pistol in .45 ACP, five identified carbines from the Battle of the Little Big Horn, and a host of others. If you're ever in the quad cities area of Illinois, this museum is a MUST SEE destination. 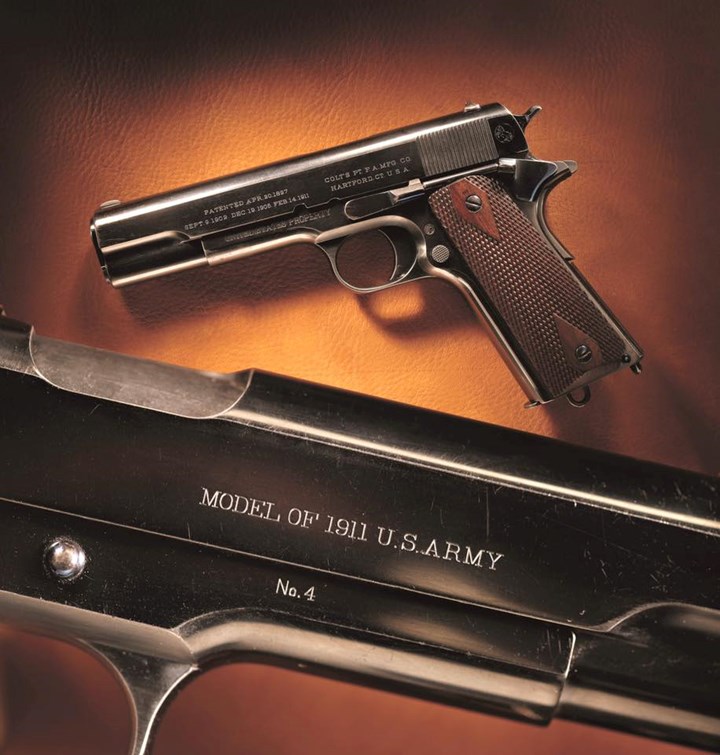 SHOW CAPTION HIDE CAPTION
The low serial number on this M1911 .45 ought to attract some attention. During the developmental evolution of the famous American pistol, very low serial numbers were often duplicated as new variations were created and evaluated. This pistol bears the No. 4 on its right frame face. 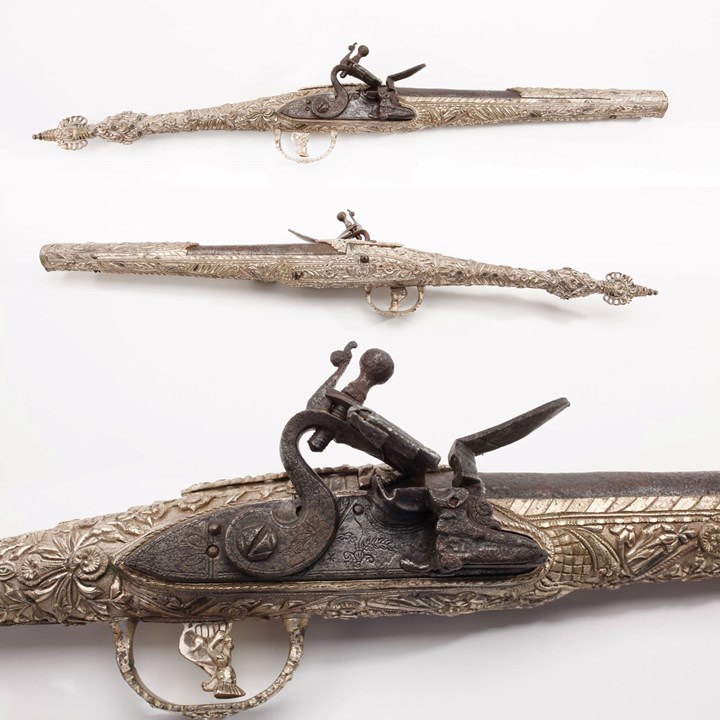 SHOW CAPTION HIDE CAPTION
This pair of Turkish/Balkan rat-tail flintlock pistols feature the rare instance of a gun's stock made from precious metals. Aside from a slender, tapering stock cast in silver, the pistols' resemblance is the opposite of its ugly vermin namesake. The guns also feature filigree carving and engraving and the ramrod has a silver handle and conceals a small stiletto dagger. The iron barrel and lock prevents the silver from tarnishing and ensures that these pistols stay beautiful. And since these guns were worn as a symbol of rank and status, who would want to wear tarnished silver pistols? 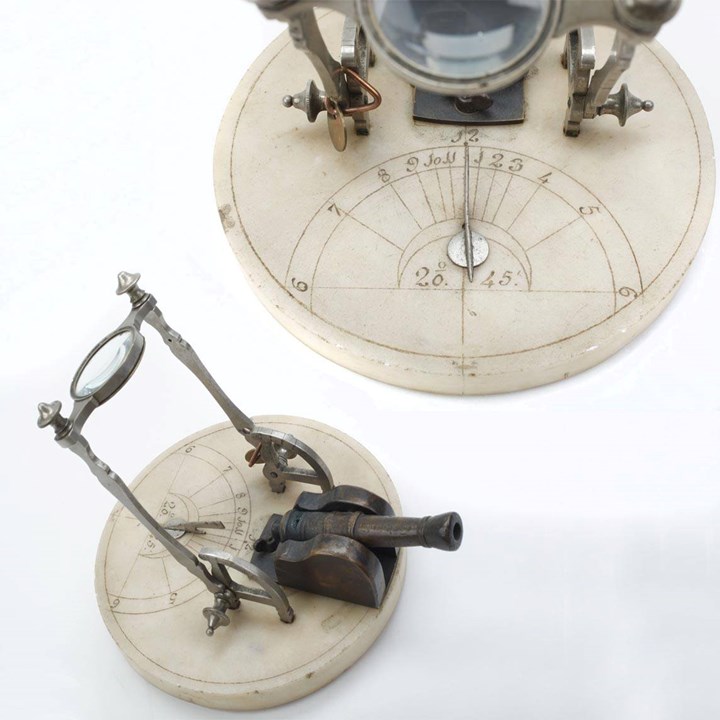 SHOW CAPTION HIDE CAPTION
This rare sundial gun is a curious time piece from the mid-18th Century. As the sun moves across the sky, the gun's glass lens creates a narrow beam of light that travels along the stone etched arc, ticking off the hours at each pass. At Noon, the sun’s rays land on the .30 cal brass cannon’s breech, sparking a powder charge previously placed in the trough-shaped touchhole. The resounding BOOM that follows represents true Noon to all those in earshot. 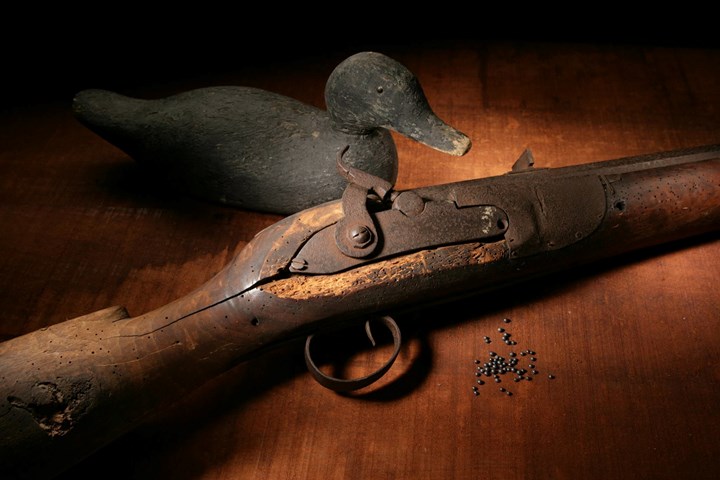 SHOW CAPTION HIDE CAPTION
This 77-inch smoothbore percussion gun was used as a punt gun in the Chesapeake Bay by market hunters who supported Washington DC and Baltimore restaurants. Charged with a massive load of shot and powder, a discharge could yield a hundred or more ducks when aimed at a flock. As you can see, heavy recoil and harsh environmental conditions have impacted this Punt Gun. 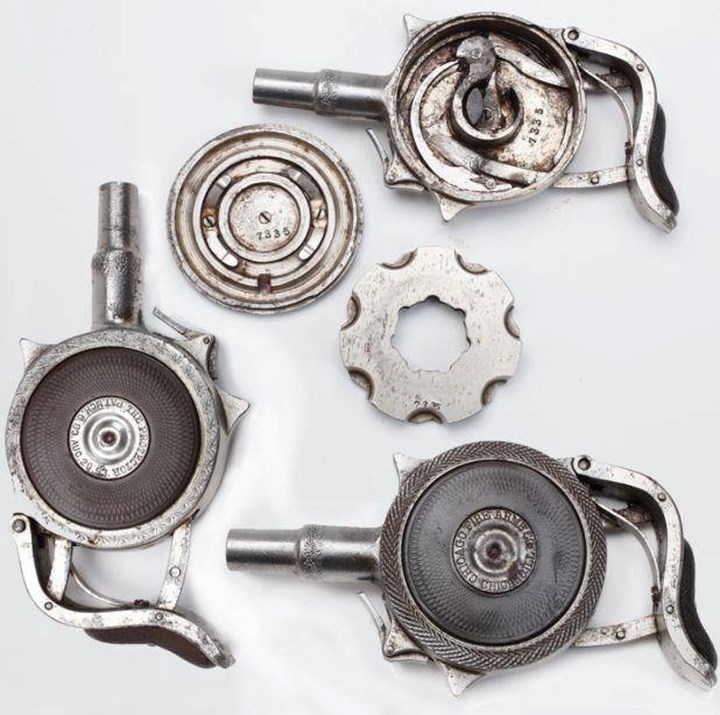 SHOW CAPTION HIDE CAPTION
This unusual pistol is concealed in the palm of the hand with the barrel projecting through the clenched fingers. The small lever above the barrel serves as a safety and the gun is fired by squeezing the large lever on the back with your palm (base of the thumb). The extra short .32 rimfire rounds were arranged like wheel spokes in its disk-like magazine and would rotate a new round into position with each squeeze. 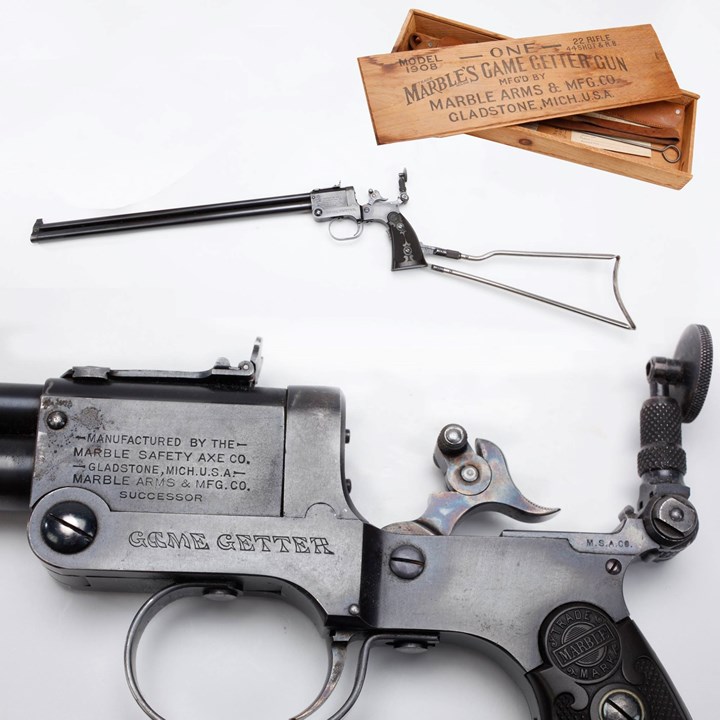 SHOW CAPTION HIDE CAPTION
The Marble’s Game Getter is a combination gun featuring a .22 rimfire over a .44-40 or .410 bore shotgun barrel. Built by a company whose previous big sellers were a safety axe and a sportsman’s match container, its folding stock was beloved by hunters and trappers and about 20,000 were produced from 1908 to 1914. Unfortunately the Game Getter ran into trouble when the National Firearms Act of 1934 regulated the length of rifles and shotguns and some Game Getter models had barrels shorter than the 16-inch rifle and 18-inch shotgun federal minimums.
More
SUBSCRIBE

The NRA Museums collection of firearms is one of the most impressive in the world. Its network of the NRA National Firearms Museum, NRA National Sporting Arms Museum at Bass Pro Shops, and the Frank Brownell Museum of the Southwest reveal the story of American history as much as they walk you through the evolution of firearms technology.

Each day, the NRA Museums Facebook page shares one of the beautiful and historic pieces from its collection to give a small taste of what you can see at any location. In case you've missed them or just want to look again, here's a recap of this past week's guns.

IN THIS ARTICLE
Guns of the Week
More
SUBSCRIBE