Female Shooters on the Rise 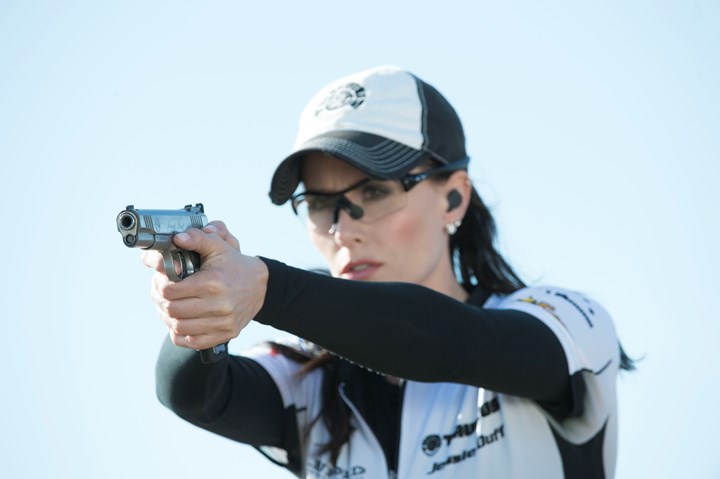 Her accomplishments and accolades in the competitive shooting world speak volumes to her proficiency in firearms. Recognized as one of the most accomplished competition shooters in the world, she has won both world and national championship titles and is the captain for Team Taurus. 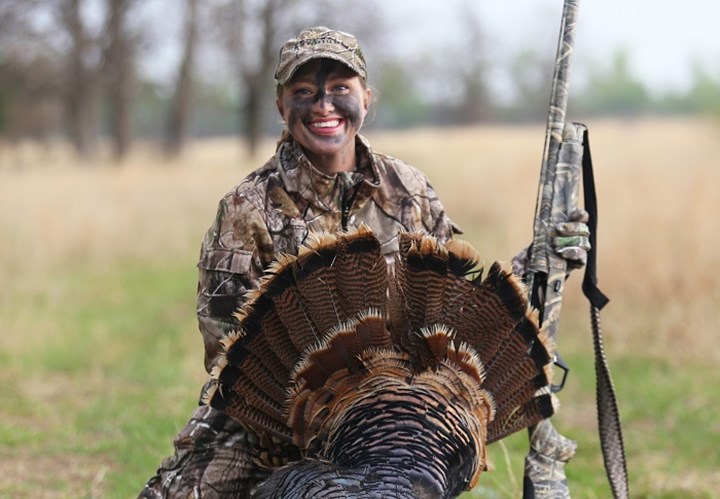 Julie Golob is a champion, veteran, author, hunter and ambassador. She started shooting competitively at the age of fourteen and has been hooked ever since. She has won over 50 world and national titles in 7 different shooting disciplines. Her confident gun handling skills and accuracy caught the attention of the US Army Marksmanship Unit’s (AMU) Action Pistol Coach, and soon thereafter Julie was accepted to the Army’s Action Shooting Team. Julie was named U.S. Female Athlete of the Year. Julie has also authored a book serving as an introduction to firearms and shooting novices, and a primer to help experienced shooters improve their skills. In her free time, she enjoys hunting and preparing meals with the harvested game. Julie is also an #NRAMom. 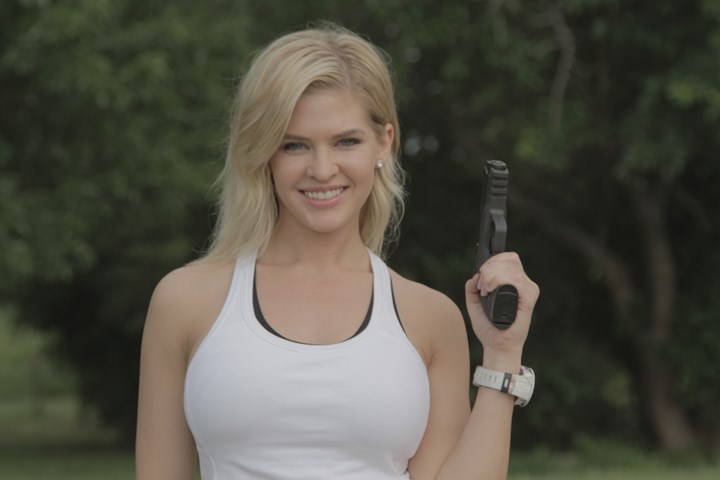 Theresa Vail can be remembered as the contestant who turned heads at the 2014 Miss America pageant where she openly revealed her tattoos during the swimsuit competition. She is a woman of many facets alongside her pageant participation – she is a U.S. Army Sergeant in the Kansas Army National Guard, marksman, and huntress. 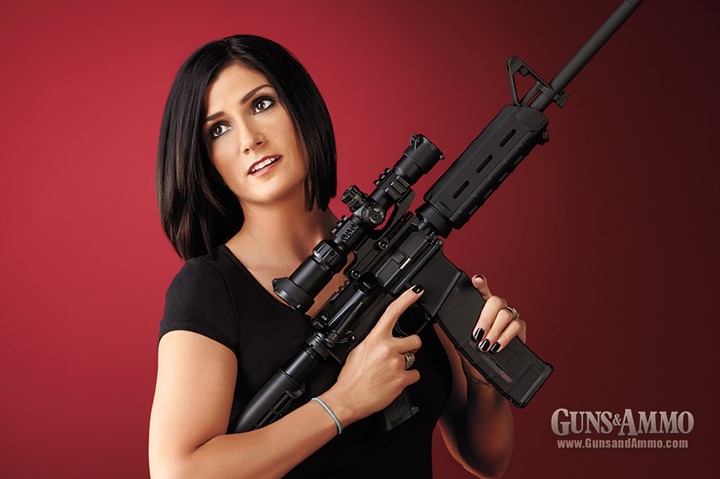 Dana Loesch is the host of the award-winning, nationally syndicated daily radio show, The Dana Show. She is also hosts, “Dana” on The Blaze television network, and appears regularly on Fox News, ABC, CNN, among others and has co-hosted “The View”. Her book, Hands Off My Gun: Defeating the Plot to Disarm America” is a national best-seller, and she is best-known for being a strong voice in Second Amendment rights. 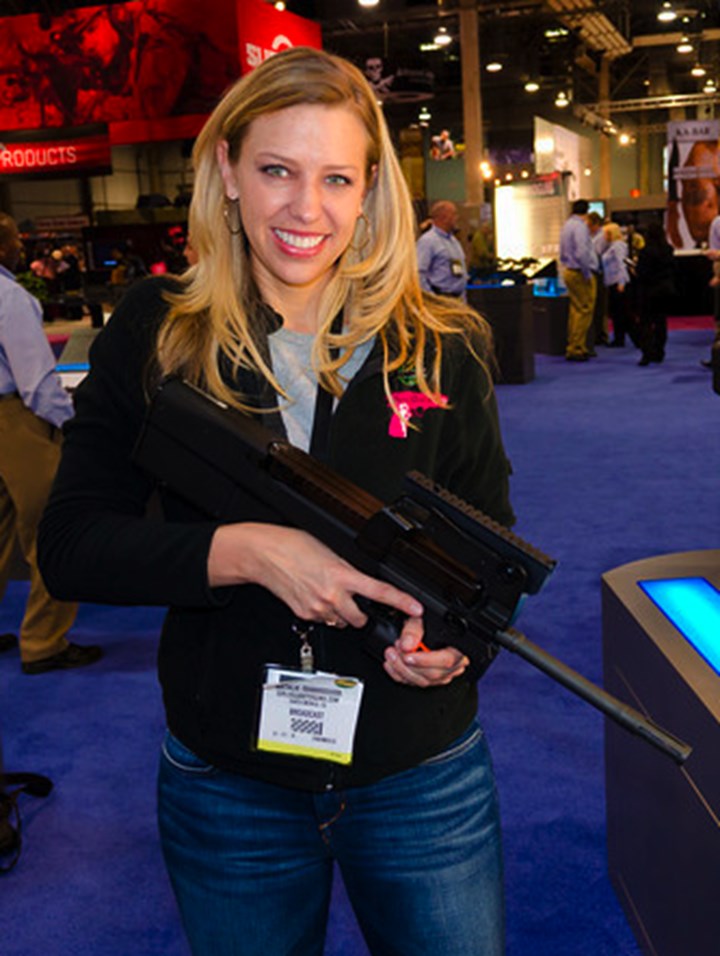 Natalie Foster is the CEO & Co-Founder, Editor of Girl’s Guide to Guns – a site dedicated to showing women how fun, challenging and addictive shooting can be. She is currently host of NRA Women’s Network “Love at First Shot” 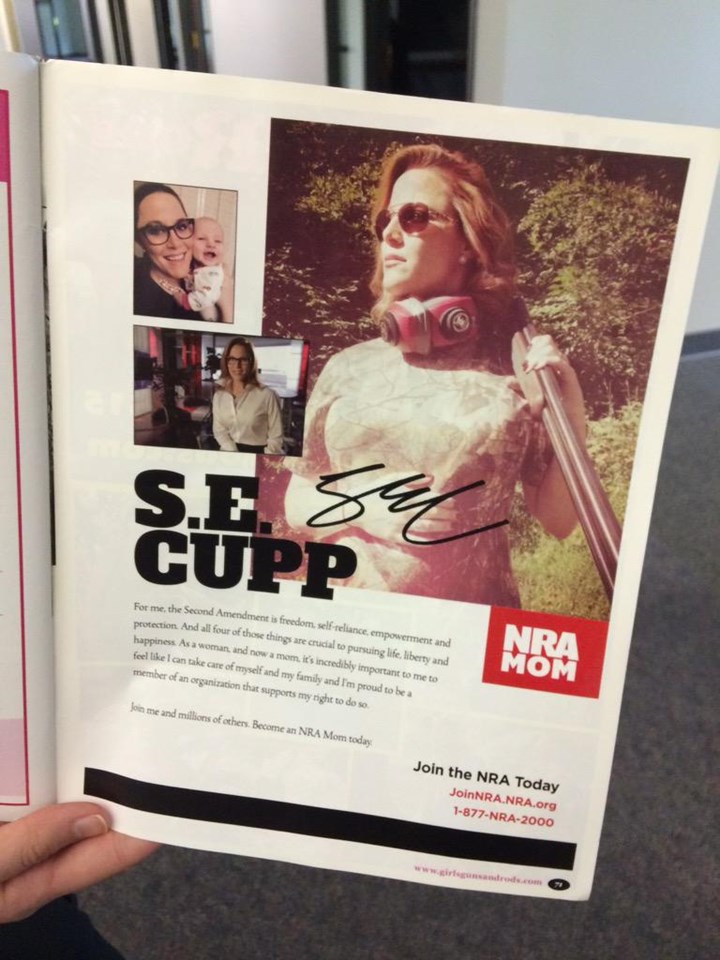 S.E. Cupp is a conservative columnist, author and commentator. She is best known for her role as co-host of the CNN program, Crossfire, and contributor on TheBlaze show, “Real News.” She has authored/co-authored two books: “Losing Our Religion: The Liberal Media Attack on Christianity,” and “Why You’re Wrong About the Right”. S.E. is an avid outdoors woman with a passion for our Second Amendment Rights, and a proud #NRAMom 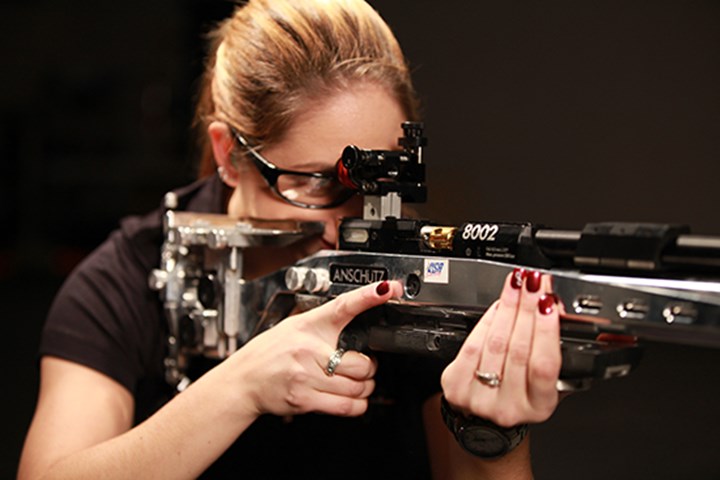 Jamie Gray began shooting competitive BB Gun at the age of 8, winning the BB Gun Nationals at age 13, and started shooting international rifle at age 14. Her enthusiasm for the shooting sports led her to attend the University of Alaska Fairbanks, where she shot for its nationally-renowned rifle team. She participated in the 2008 and 2012 Olympic games as a member of Team USA. She is a 4 time Olympic Gold Medalist. 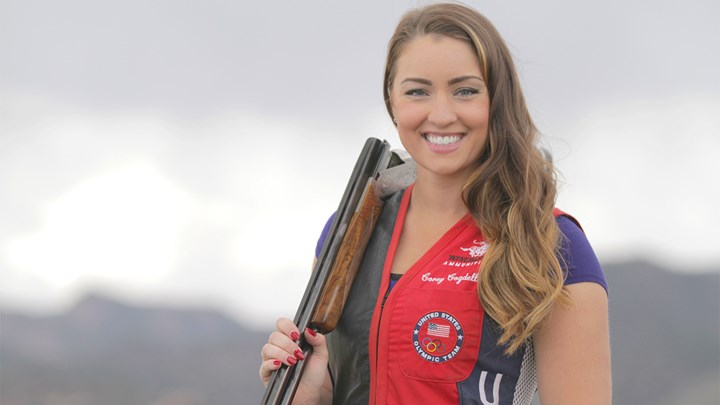 Corey grew up hunting with her father at the age of 3, which fostered a love for shooting. A few years later, she joined the 4-H program and started to develop her trap shooting skills. In 2006, Corey made the National Development Team at Fall Selection where she placed first in the Junior’s Women’s Trap competition after only shooting for a few years. That same day, she made the National Team when her score also placed her third in the Women’s Trap competition. Her first international competition, the 2007 Changwon World Cup, Corey captured the bronze medal. She earned a spot on her first U.S. Olympic Team in March of 2008, she won bronze medal at the Olympic Games in Beijing. She is currently training for the 2016 Olympic Games in Rio. 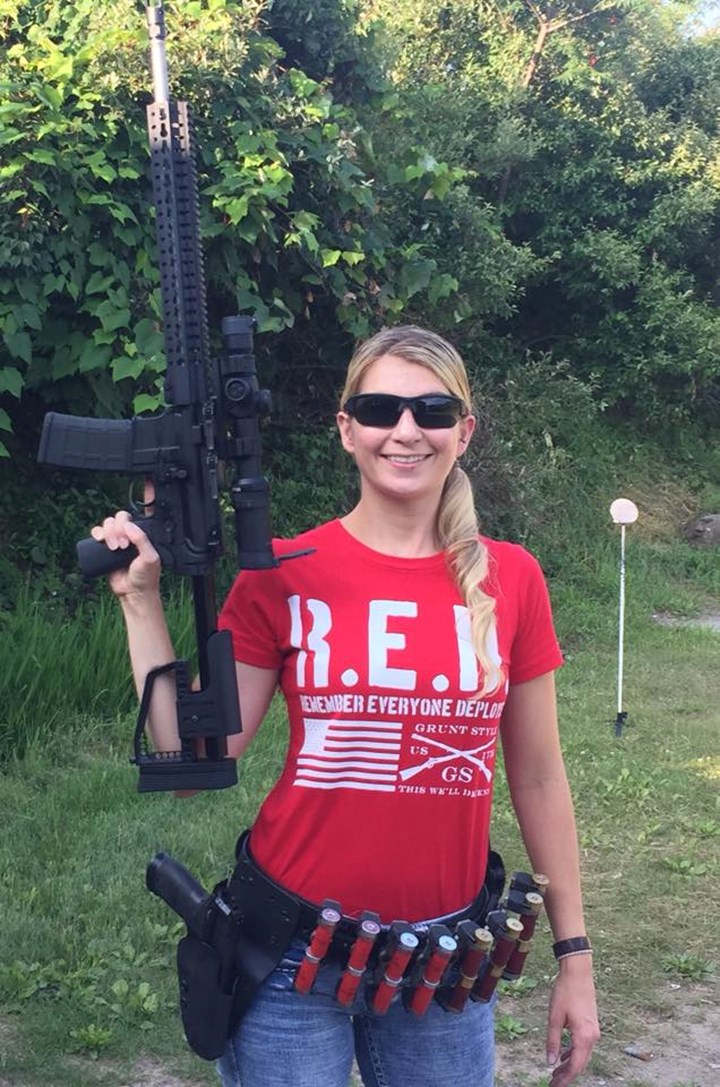 Krystie Messenger, better known as TacTissy, created TacTissy.com as a way to share her collection of notes and firearms explanations with her friends. The website, and TacTissy have quickly gorwn in popularity over the years. She is now one of the most influential Second Amendment advocates and firearms enthusiasts that reach out to women and encourage them to learn about and exercise their rights. 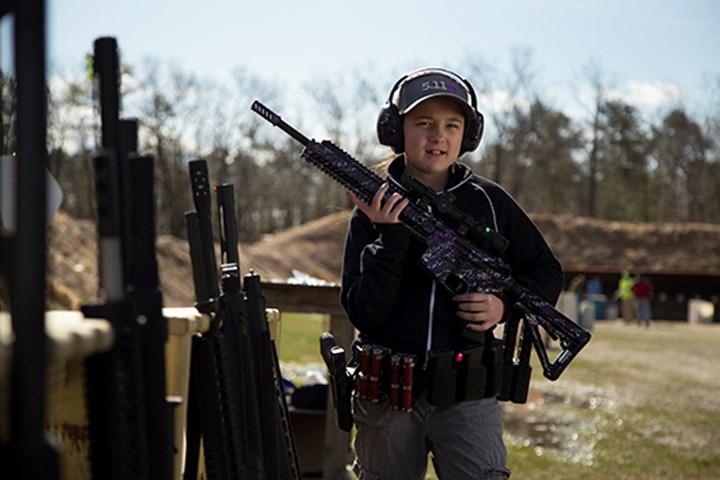 At only 10 years old, Shyanne Roberts has been making waves across the shooting industry. She is the next rising star in the Women’s competitive shooting circuit and a force to be reckoned with. She has beat out adults and racked up awards and sponsors that provide her with everything from ammunition to firearms. 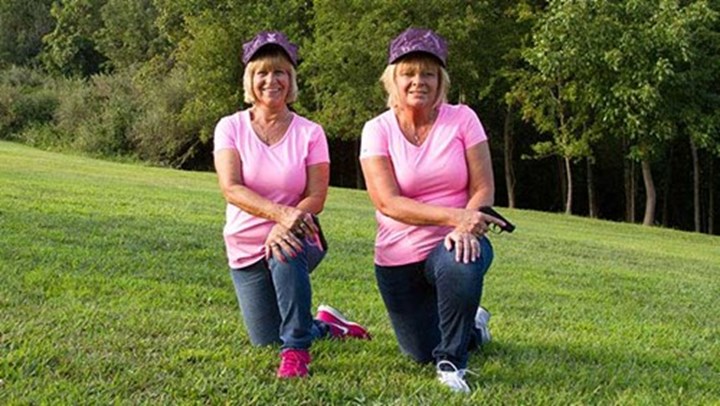 Konnie Couch and Robin Willoughby had their homes and business robbed in 2011, and they had enough. They were inspired to start Women Armed and Ready, a group that trains women to be competent in assessing a situation and how to handle their firearm effectively if need be.

If you ask us, they are two bad-ass grandmas! 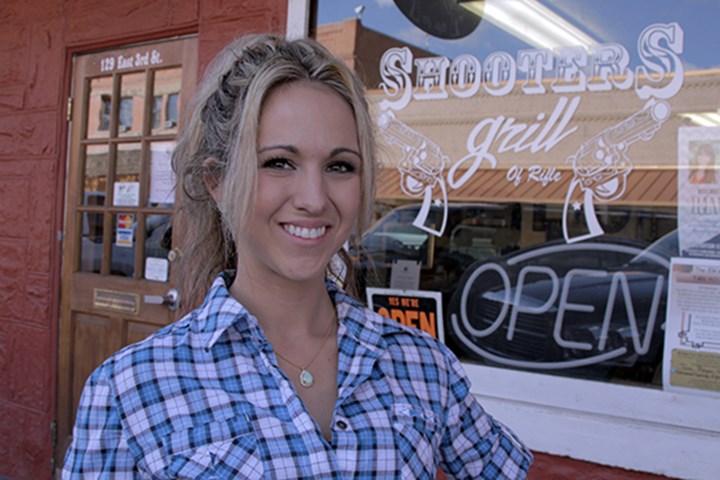 When Lauren Boebert and her husband decided to open a restaurant called Shooters Grill, they never imagined the attention that would follow.  Their restaurant located in the small town of Rifle, Colorado not only serves up delicious food, but the right to bear arms. The staff can be seen openly carrying handguns as they take orders and serve food. 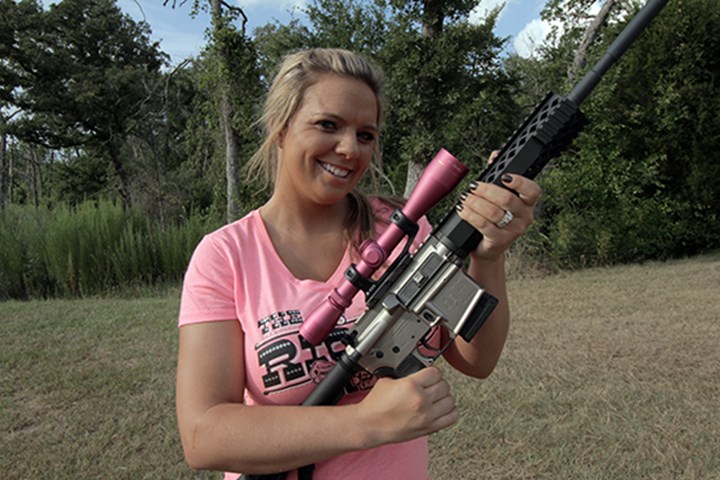 SHOW CAPTION HIDE CAPTION
Krystal "Pistol" is an American TV personality best known for her role on A&E's American hoggers. Despite her rise to fame as a hog hunter, Krystal's love for the outdoors started much earlier and expands much further... Krystal went on her first hunt at age three, tagging alongside her father and brother - a hunt that resulted an entry in the record books. From that point on, Krystal's passion for the outdoors expanded to what it has today. 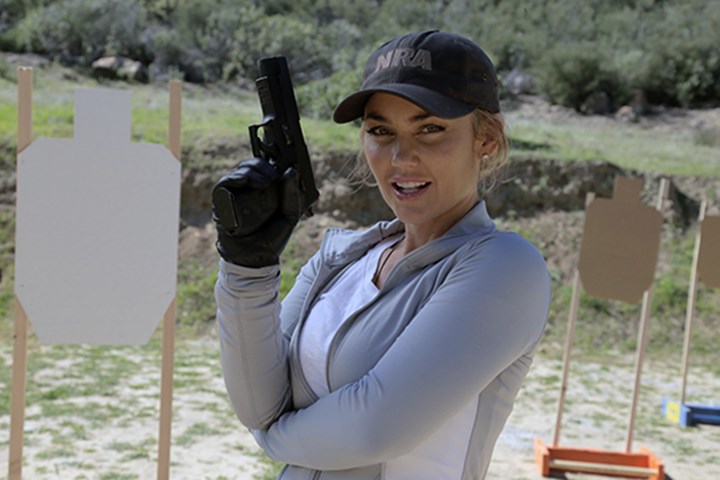 After a frightening security breach, actress Kelly Carlson knew she never wanted to feel uneasy about her personal safety ever again. Kelly took charge of her own life, she turned a bad experience into a positive one, and empowered herself by learning how to safely use and handle a firearm. 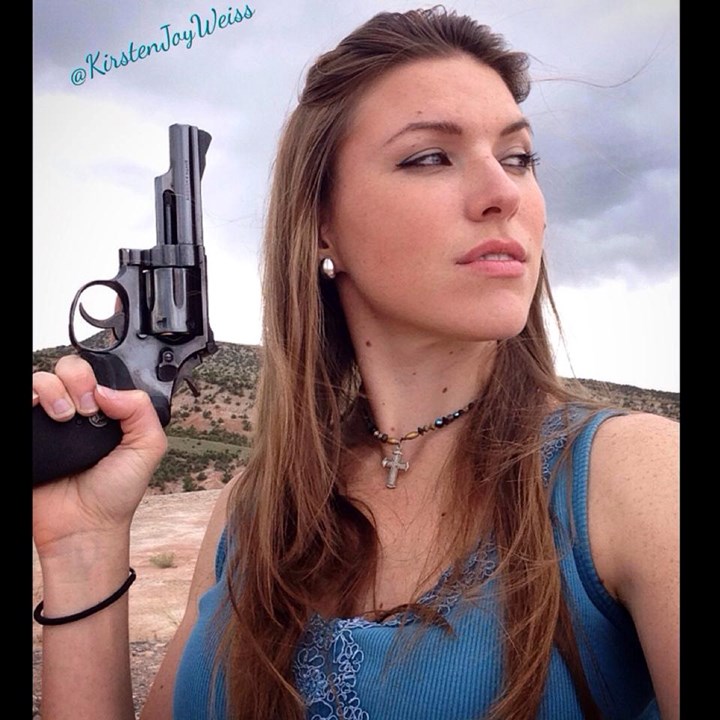 SHOW CAPTION HIDE CAPTION
Let's be real - there are no words to describe Kirsten Joy Weiss, have you seen her YouTube channel? She grew up in a family who appreciates guns, and began her Olympic-style rifle career in the latter part of her high school years, winning gold at the International Cup at Bisley, England and received a collegiate rifle scholarship to the University of Nebraska-Lincoln. From there she made the national development team, competed in World Championships, World Cups, made the Olympic short-list, won national titles and the list continues...she isn't your stereotypical shooting enthusiast, her performance shooting and trick shots do all the speaking.
More
SUBSCRIBE

Earlier this year at the Great American Outdoor Show, I was standing amongst a crowd of people watching as World Champion Shooter and host of NRA All Access, Jessie Duff, gave a presentation on “How to Shoot Like a Pro”, when I overheard a conversation between two men:

The shooting industry is no longer just a man’s world.

The rise in female shooters and female gun owners have steadily increased throughout the years. According to a Gallup poll conducted in 2005, only 13 percent of women were female gun owners, but by 2011, that number rose to 23 percent. (Yahoo! News)…that’s a 77 percent increase in just 7 years (Town Hall).

It doesn’t surprise us one bit in the increase of female gun owners and shooters – women see no boundaries or limitations when it comes to self-defense or protecting loved ones.

Women want to ensure they are protected at all times, and don’t have to rely on anyone for that protection. Once they learn how to protect themselves, their interest expands into other areas such as target shooting, competitions and hunting.

The facts are, women are a growing demographic of gun owners. There are hundreds of groups out there just for women and firearms – together they learn, they train, they teach and sometimes they compete.

Here’s an ode to the women who we love that prove firearms are not just for the man’s world.