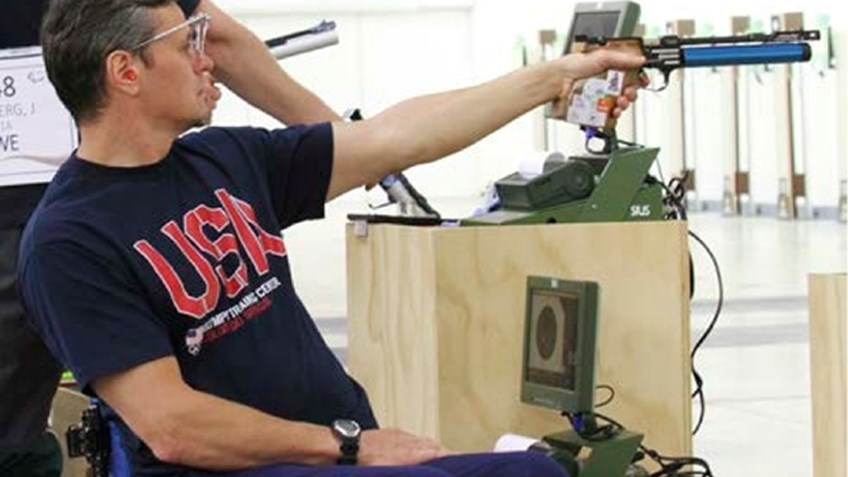 Mike Tagliapietra is our country's foremost Paralympic marksman and Barb Baird of Women's Outdoor News got to peek into his range bag for Shooting Sports USA.

You could say that Mike Tagliapietra had a great year last year. Named the 2014 Paralympic Athlete of the Year, this Wisconsinite’s performances in prestigious world competitions qualified him to be the lead and the face of the Paralympic Program for USA Shooting. His perseverance and winning performance also propelled him to secure a berth on the Olympic team for 2016, to be held in Rio de Janeiro.

Tagliapietra competes in the following disciplines: 10m air pistol, 25m sport pistol and 50m free pistol. He has been shooting competitively since December 2011. He shoots a Feinwerkbau P44 for 10m Air; a Pardini SP for 25m Sport; and a TOZ 35 Vostok for the 50m Free Pistol.

He carries a Porta-Brace 2750 hard case. “I selected it because the company is in the USA and I could get it in the color blue,” said Tagliapietra.

Here’s what he carries in that case:

“My dad worked 38 years at a pipeline company and worked his butt off to provide for four kids. My mother’s job was equally challenging, staying at home and raising four kids. My parents taught me numerous things in life, but two of the most lasting, impressionable things were to work hard and take pride in what you do, even if it’s not your dream job. After my injury in 2003, I had many people tell me I couldn’t do this, I couldn’t do that, but what my parents taught me helped me to persevere. Whatever it is you want to achieve in life, do not listen to the doubters. Follow your dreams, work hard to achieve them and pursue them with vigorous passion,” advised Tagliapietra.

Asked for three words that describe him, he said, “Determined, stubborn ... as we found out after the Dortmund competition last year, I’m not a bad dancer – though not nearly as good as my teammate Shaun Tichenor. That guy can burn a hole in the floor.”