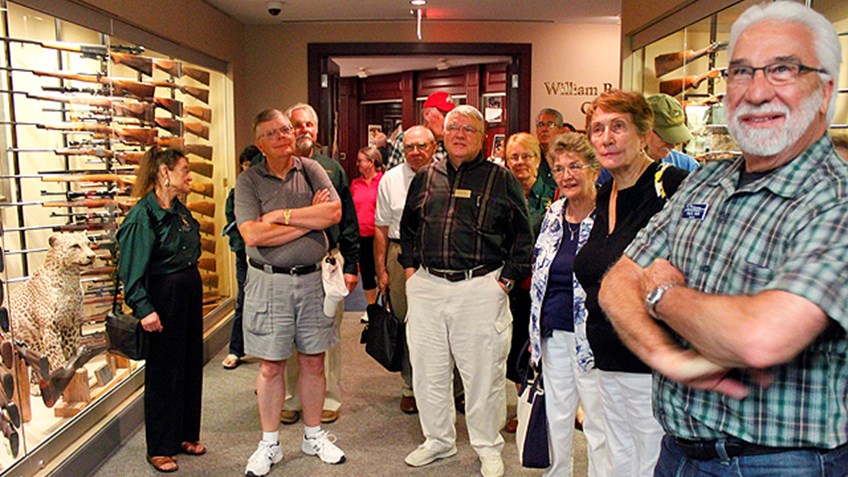 More
SUBSCRIBE
It's been a stellar year for the Ohio Gun Collectors Association (OGCA). Not only are they celebrating their 75th Anniversary (Gold or Diamond depending on your anniversary authority), but they are also basking in the win of their tenth Gun Collector's Committee Trophy win at the NRA Annual Meetings in Houston, Texas. That's more than any other club in the 52-year history of the award. Not surprising given their passion for the specialty.

Founded in 1937 by Miller Bedford, the OGCA meets every other month at The Roberts Centre in Wilmington, Ohio. Open only to members and invited guests, it was at there that Schreier absconded to in mid-May.

"They asked me to be one of the judges for their 75th Anniversary Events and Displays Show," said Schreier. "It was a true honor."

To reciprocate said honor, Association officers and board members were invited down to Fairfax for a tour through NRA headquarters. The highlight, of course, being the walk through the National Firearms Museum. And the highlight of the tour was Case 72.

Known as "A Child's Room", the case contains just that ... if the room is from the 50s. With horses on the wall, Roy Rogers on the floor, cap guns on the night stand and a coon skin cap hanging from A Child's Room at the NRA Museum the bed post, the case holds a special significance to the OGCA. Especially since they sponsored it.

If you'd like to recapture some of those memories for yourself, then swing by the National Firearms Museum here in Fairfax, Virginia. Open from 9:30 to 5:00 daily, it's free to the public and always open (except Christmas). To schedule a tour, contact the museum office's at 703-267-1600.
IN THIS ARTICLE
Gun Collectors NRA Museum OGCA
More
SUBSCRIBE