How Top Shot's Gabby Franco got her start 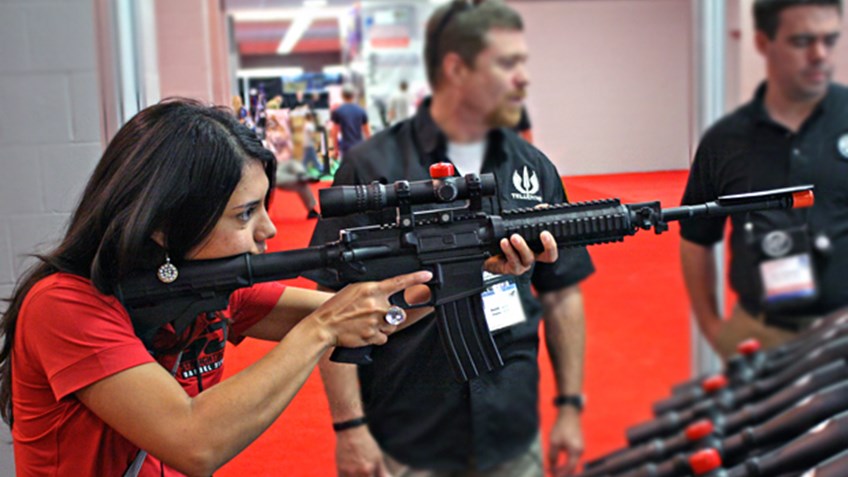 St. Louis, Mo - Two competitors were there to keep me up to speed on the ins and outs of History Channel's Top Shot this season: Terry Vaughan and Gabby Franco. Though Terry has proven to as elusive as any British Commando, Gabby put herself front and center this month at the NRA Convention in St. Louis. I took the opportunity to learn more about the Venezuelan Olympian.

You won't believe how it all began. 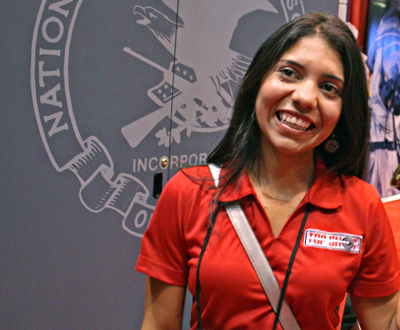 "I started by dry firing for a year," said Franco.

A year. One full year of pulling the trigger only to hear a whack instead of a bang. Now she laughs about those simpler times, but it must have been maddening for an eleven year old. Yes she was small. And, perhaps like most children her age, maybe she'd move on to something else. After all, there is no way her father could imagine that a simple trip to a Barquisimeto range would launch his little girl on such a journey.

"My father went down there to get a pistol permit," Franco began. "While there, he discovered there was a junior shooting team. He thought, ahh, well I have three girls, so there you go."

Setting aside dreams of swimming, modeling, and even gymnastics, Gabby pressed forward with her pistol practice.

"I was always thinking when am I going to shoot? When is bullet finally going to come out of the gun? Once it happened … I was hooked."

Hooked enough to spend the next three years following her father to the range. Practice followed by more and more dry fires at home, Soon it became impossible to separate Gabby from her old school, break-top air pistol. Soon she would put her skills to the test.

"I was just having fun," Franco beamed. "My father entered me in my first competition; a National. I finished third overall with that old air pistol. Everyone else, like shooters on the National team, they had their fancy pistols but I finished third."

That's when the magic really started. On the day of her third place finishing, a representative form the Venezuelan National Team was in the stands. Soon enough, Gabby was competing side by side with the best shooters in the country. This was her opportunity to show what a year's worth of dry firing and three more on the range could do for a determined competitor.

"It was exciting. I was competing, I was traveling and representing my country."

The Bolivarian Games in Peru would be her first test. A test she passed with flying colors.

"I won the Silver," Franco exclaimed. "That just made me even more excited."

That's when the Venezuelan Olympic Committee started taking notice. A silver at the 1999 Pan American Games solidified her spot in Sydney. 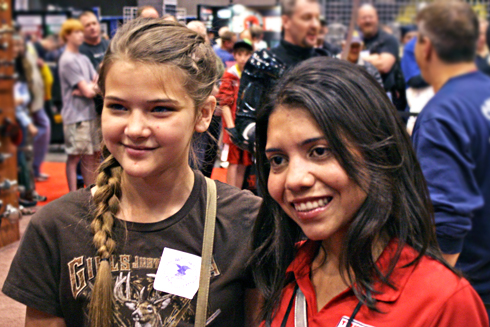 “I was upset that I kept winning silver medals. Why not gold? Then they asked if I wanted to go to Sydney. I couldn’t believe I was going to the Olympics, it was such an honor.”

Joining forty-nine countrymen and women, Franco was now part of elite group. Unlike the rest of us, who watch from our living rooms, she was now shoulder to shoulder with the top athletes in the world.

“Walking into the stadium back in 2000 … it was like the movies. You see camera flashes, people cheer and your heart is spinning like ‘Oh my god I’m here’! It was incredible … probably the best experience ever.”

Unfortunately, like the rest of those on the Venezuelan team, Gabby did not return with a medal.

“I never expected to be on an Olympic team,” she reflected. “I was a little nervous and wish I had more time to prepare, but I’m glad to have earned a spot on the team Like everyone else there, I did my best with what I had.”

And though she did not walk away with a medal, she did return from Sydney with something almost as good.

“Every time someone asks, every time I tell the story, I relive it every time. It’s like I’m there again.”